Last Saturday with our first group trip to London with the Arsenal Belgium supporters club we had an amazing day. Arsenal winning 3-0 helped of course. But apart from that it was fun.

We had a nice group of supporters and for a handful of them it was their first match in the Emirates. So they were already very excited from the start. You should have heard them on the way back. They sure can’t wait to come back.

The trip went nice and we were in North Greenwich at the O2 Arena even before schedule. Andrew who not only does the referee previews and counts the cards waited over there for us. Now Andrew is a bit of an older person who just likes me carries his age on his Arsenal shirt. And as he has number 65 on it I was amazed by the speed he came at us. And I was even more amazed when I found out that he was injured.

Now the thing is that Andrew was by far the oldest person in the group. But in Flanders we are known for being relaxed most of the time. When we work we work hard but when when we are not working we like to sit, relax, enjoy life. We are the most Southern Northerners in Europe. We live on the border line between the Southern mentality and the Northern.   So when Andrew took the lead he used his normal London speed. But half of our group was so buzzy looking at all what London can offer even in the Underground that we had to ask Andrew to slow down.

That made me notice the big difference between people from London and people from my part of the continent. Yes we will speed it up but only if it is really needed. As for London people…they always seem to be in a rush. It was one of those funny things that struck me and I always have something that strikes me whenever I come to London. And you can actually tell even when looking at English man if they are from London or not. I even noticed the Burnley supporters walking slower than Arsenal supporters when looking for a pub. Or they were less thirsty maybe?

Anyway. Andrew is not only a great writer for Untold he also had a map of the area around the Emirates with him for our group and that was a really very much appreciated gesture. It sure made the newcomers a bit more relaxed about finding their way around the stadium.

Andrew guided us through the Underground up to the stadium where we split up. The new boys ran to the shop and spend all their money. A few others went to the pub to meet the famous Tony Attwood. And to have a drink. And something to eat. I don’t know which as the most important reason to join us to be honest.

But the pub was great. The drink was fine. The food was fine. And most important for me the party was fine. I think this must have been the biggest gathering of Untold at a match day. I have met Drew and Andrew before but then Tony was out of town. And I have met Tony and Drew together but then Andrew was not around. But now we had 4 Untold Arsenal writers in one pub together having a nice moment together. 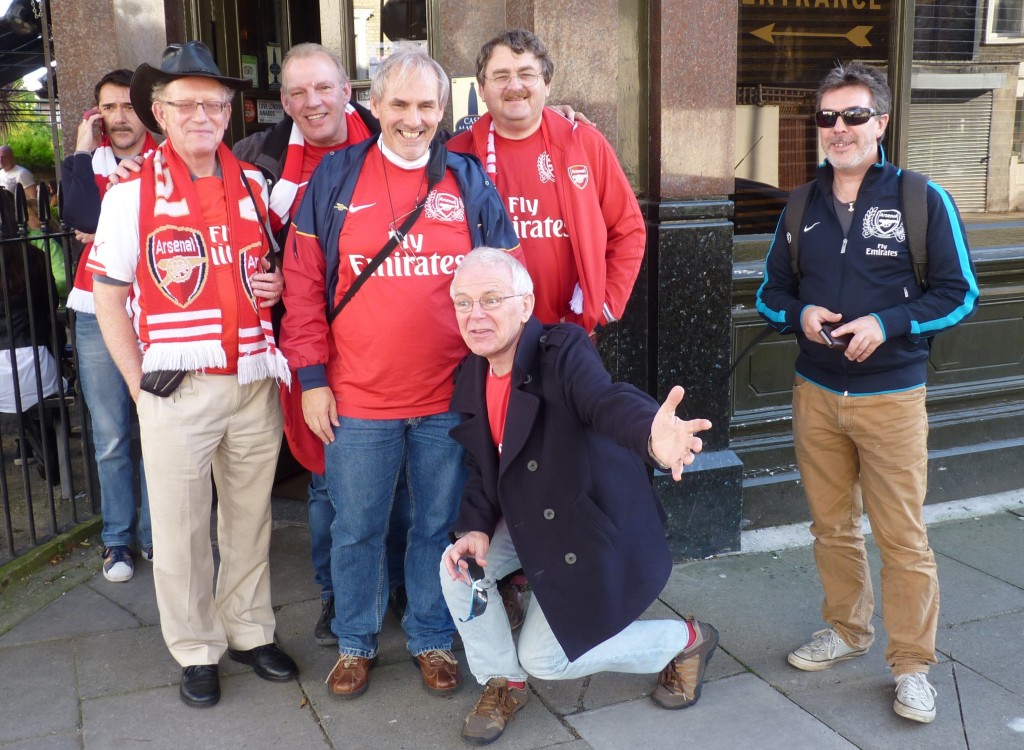 Leaving the pub, Tony doing…..yeah what were you doing Tony?

It’s always fun coming over but this was more special. And as I wrote in an article a few days ago it gives me a great and warm feeling not only to be surrounded by the members of our supporters club but to have my English friends with me, real Londoners so walking fast all the time, was adding to the feeling of being ‘home’.  I can’t help it but that is how London feels to me since 1979. A second home.  I think I could get used to living in London. I just would have to add up with my speed of walking I think.

We talked about things. Untold of course, life, love, food, drinks, Dylan, poets, websites, walking fast, … it really was a great day out as usual when I come to London. Time flew by and that is always a great sign. Being with friends is always nice and meeting people from Untold adds to the occasion. I just noticed that our readers Menace and Finsbury were sitting next to each other in the stadium this match. It’s a small world after all….

The match was fun also and I really enjoyed being in the stadium. But I have talked about that in another article.  After the match we went to the underground, stopped just outside to have a last guinness or pint of beer or whatever. And then the long road home started. At our pace. Being overtaken by many quick London feet.

Well it didn’t look that long to be honest. The win had us in great spirit of course. 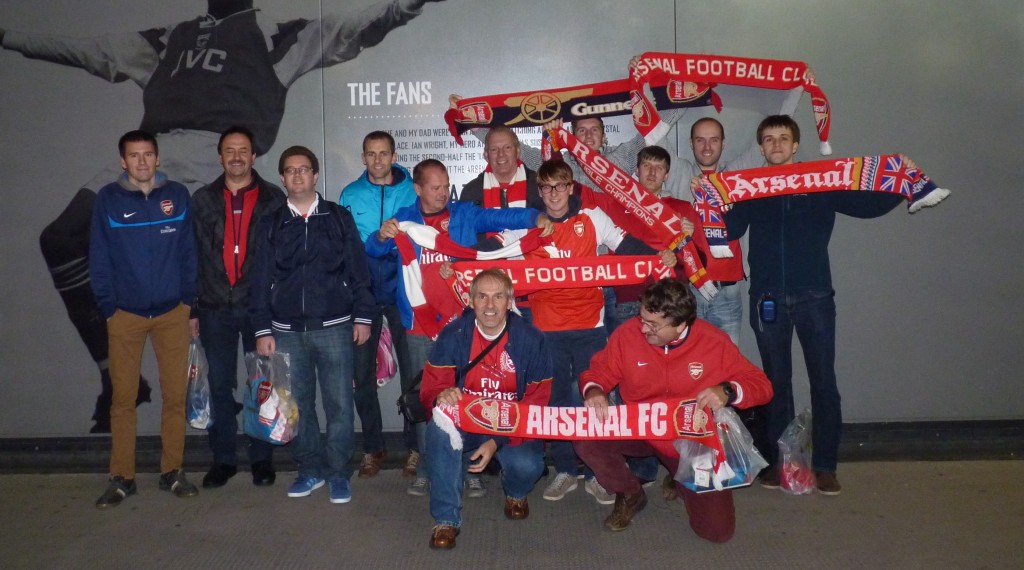 Happy faces after the match

And with so many newcomers in our group it was great to see how on each occasion we formed a real group. When eating in Folkestone while waiting for the shuttle train we all sat together around the same table. And in the shuttle we also moved to one carriage as the cars were split up to be together.

To create a bond between supporters is what Untold does for me. And that is also one of the most important goals from our supporters club. And by the look of it we completely succeeded in doing that last Saturday. It gave me a warm feeling when I looked at our troops. I got a few compliments at the end of the day from our members. But if they wouldn’t have been such great guys it wouldn’t have been such a great day out in London.

Looking forward to come back to my second home soon. Meeting you all again and feeling one in our support of that great club that is called The Arsenal.

Later today we move on the Anderlecht match.