We’ve said it a few times.  We’ve compared Giroud to Henry (much to the annoyance of some) and compared his goalscoring achievements with those of Messi and Ronaldi on a minute by minute basis.   We’ve looked at the number of goals scored this season, and noted the funny little commentaries by people who call themselves Arsenal fans and say he is not good enough.

As the basic numbers show, he is the most prolific minute-per-goal player in the Premier League this season.

And to the people who don’t like him he jus says,“Je ne pète pas plus haut que mon cul” or “I don’t fart above my bum.”  A quaint and interesting French expression, I am sure you will agree.

Mr Wenger has a habit of finding goalscorers in unexpected corners.  Henry himself was one such and as we know he took a couple of years to get fully in gear at Highbury.  Eduardo was shaping up to be one, but he was chopped to bits.  Giroud built up his goalscoring at the same speed as Henry but was then hindered by the leg break. 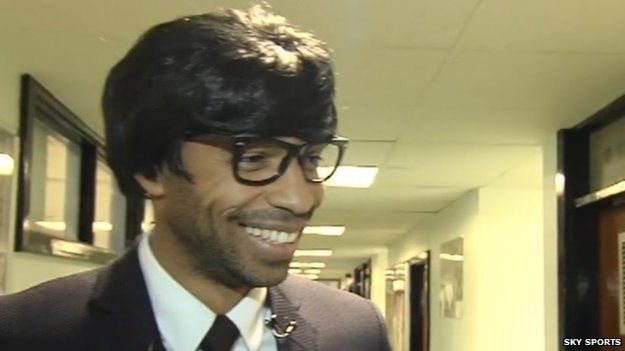 Henry (above – honest) got a goal ever 123 minutes in his third season at Arsenal.  (That’s why Thierry is disguised as a teacher – pic from Sky Sports.)

But Giroud is running on a goal every 97 minutes, the best record of any player in the top flight.  I don’t like to say “I told you so,” but basically “I told you so”.

And in the midst of all this he had a poor game – at home against Monaco. But one bad game didn’t affect him – he bounced straight back.  It’s the old mental strength thing that managers love to see.

And although no one actually says, “Top four is a trophy” the value of a Top Four finish was once again emphasised this week as Uefa confirmed the expected big growth in prize money and solidarity payments as a result of broadcasting and sponsorship deals going up by around 35%.

All European clubs will share in the Uefa pot of €2.24bn while those in the Champions League (the Top 4 place that is not a Trophy) will get a share in another €1.2bn each season – an increase next season of around €300m to be shared between 32 teams.

In other news Chuba Akpom looks likely to be going on loan – after having sat on the beach this season and made a few trips onto the pitch.  Seven clubs are after him and the Championship looks to be the level.

He’s 19 and signed a 4.5 year contract in February this year, and the progress he is making is astounding – he’s already played and survived five games with the England under 20s.   Previous loans were to Coventry and Brentford, and with Coventry playing their home games in Northampton last season that gave Blacksheep and I a chance to see him in action.  Impressive it was too.

Indeed it was undoubtedly the progress of Chuba that led to the high scoring Benik Afobe (currently the top scoring league player) to be sold to Wolverhampton.

Norwich City, Nottingham Forest, Bournemouth, Ipswich Town, Derby County, Wigan Athletic, Fulham… they are all lining up to get him before Thursday.

One other player on the move is Damián Emiliano Martínez, sometimes called Damián sometimes Emi sometimes Emiliano who played in the Champions League for Arsenal, and who has joined Championship side Rotherham on an emergency loan.  He played for them last weekend.

Finally today’s made up story.  The Independent tells us that Arsene Wenger has revealed that he enjoys Match of the Day with the sound off.

“It seems Wenger just doesn’t want to hear it – although he did admit to occasionally watching the show in order to see how his side have been perceived by the ‘experts’… Of course there is the idea that Wenger turns down the volume in order to fill the airtime with his own running commentary, and who wouldn’t want to listen to that, though this time he might actually see a controversial incident when it happens,” says the comical Indy.

But what Mr Wenger actually said was

“In the evening I sometimes watch Match of the Day to see what happened here and there and to see how we have been perceived. Sometimes I think it would be better to watch it with the sound turned down!”

Anniversary of the day:

25 March 1966: Pat Rice turned professional with Arsenal, having been signed as an apprentice in 1964.  He made his first team debut in December 1967 and later managed the club for a short spell.

14 Replies to ““I don’t fart above my bum”: Giroud, Henry and other tales”