Now here is something Untold hasn’t covered before: fantasy football.  But we are doing it now, because after a lot of looking around and courtesy of some awfully nice people at DraftKings, your fantasy footy experience is about to be transformed.

Daily fantasy football from DraftKings offers the opportunity to win big prizes on every weekend of the Premier League season and do so whilst picking a brand-new line-up on each matchday. No more getting lumbered with a player just because all the mindless whatnots in the media tell us that he is the next great super hero (not that many media entities actually do ever say that about Arsenal players).  You can move around as much as you like. 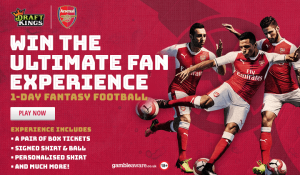 Picking a line-up works like this: you get a $50,000 budget to choose eight players: one goalkeeper, two defenders, two midfielders, two forwards and one utility player (any outfield position). When it comes to winning the big money, you’ll need to have your Statto head on to be in with a chance of triumphing in the contests offering the very biggest prize funds.

Players score points across a range of categories. All the usual categories like goals (+10pts), assists (+6pts) and shots (+2pts if on target, +1pt if not) are here but your players also score points for interceptions (+0.5pts), successful tackles (+1pt), crosses (+0.75pts) and even fouls drawn (+1pt).

You want my tip?  Put Elneny in every time – but then what do I know?

After you’ve selected a line-up enter one of the hundreds of contests available. Public contests are the biggest ones around and offer thousands of pounds worth of prizes each weekend. Private contests, meanwhile, are where you can take on your mates and gain bragging rights on every weekend of the season.

When you’ve picked a team and entered a contest, it’s time to sit back and wait for the lineups to be released. When this happens, line-up indicators will denote who is playing and who isn’t, at which point be prepared to adjust your line-up accordingly.

Then you’re done.   Sit down, stay calm, avoid public houses packed with drunken journalists, only watch BBC Sport with the sound down, but somehow watch the points rise in real-time as the goals fly in, tackles are won and saves are made.

And let Untold know how it went.

To Qualify, users must CLICK HERE, register an account and enter your line-up in this Saturday’s EPL £40,000* Kick Off Special by 3pm

One Reply to “Sick of waiting all season to switch out your expensive fantasy football stars?”