By Dr Billy “the Dog” McGraw

Head of the Dept of Psychiatric Medicine, University Hospital of the North Circular Road

We don’t normally start previews for a Sunday game on Thursday but matches against the Tiny Totts do require a little more chit chat than most, and there are always one or two things worth looking back on.  So I’ve popped into Chez Indicibles to lend a few words to the “debate” as the journalists like to call their wild ravings.

Let’s start with this little goodie from the BBC.  It is presented to show what the world would be like if roles were reversed in terms of top of the league. 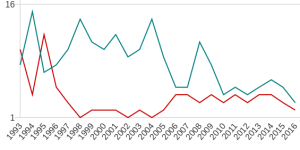 In fact the roles are upside down – first in the league is at the bottom and the Tinies are in blue.  Oh what jolly japes these Tiny supporters at the BBC get up to.  But the reality is that the Very Tiny Totts have not finished above us since the days of the Viking invasion, or at least 1995 and have had 2000 managers since then.

We could of course look back to the last game of last season.  The Tiny Totts just needed a draw to come third, and what happened?  I can’t quite remember, but I think it was rather droll.  We won, and they let in 23 goals before half time or something. It felt like that anyway.

But no, these are things from days long gone.  We should not look back so much.  Why not have a look about more recent times… October for example…

Still, the future looks bright.  After us they have State Aid Utd, Monaco and Chelsea.  A doddle.  And Tottenham are looking to go all season unbeaten as we once did.   Indeed if they beat us 0-3 they will go above us in the league.

As for us, we seem to be winning a few games of late while Ozil repeatedly engineers ways of scoring goals that no one else has ever thought of.  So maybe we shouldn’t be quaking in our boots too much.

But what of the injuries?  Surely we must be top of the injury league.  No, not really.  We only have five, to Tottenham’s four.

Theo Walcott, Santi Cazorla, Hector Bellerin and Nacho Monreal all stayed away from the coldness of Bulgaria this week, but as things stand everyone should be available – but maybe not all will play.   Gibbs might be injured.  Mr Wenger has promised to put his coat on.

However let’s not gloat over matters like 16 years, last season, when the last time was that the Totts won the league 55 years ago, which isn’t that long when compared with the length of the Ice Age…. No these are but details.

For they do well in Europe right?  Let’s have a look…

And we’ve, sort of… qualified.

But still the Tinies really are used to games in big stadia now, even though theirs is shrinking by the day as it turns into a building site.  I mean all those Wembley games…

Actually there is talk of just how many people might turn up for a Europa League match against Never’eardov U. on a Thursday.   And how they celebrated when they climbed out of the Europa Thursdays league and got into the big boys club… only to throw it all away.  Bit of a shame to have to drop back.

Still one must not gloat.   But maybe I might quote a little from the Guardian…

The Germans drank all the booze, smashed the glasses and trod dirt into the carpet leaving Spurs with some cleaning up to do. They now sit third in the group, three points behind Leverkusen and five behind Monaco who beat CSKA….

They certainly go all trembly in the new Wembley: their record is now won one, lost six going back to 2008.

The goals just won’t come for Tottenham for whom it is now six games without a win and five without a goal in open play.

In the six competitive matches Spurs have played at Wembley Stadium since 2008, the form guide reads as follows: LLLLLL.

Chuck in two friendlies against Barcelona and Celtic as part of the 2009 pre-season Wembley Cup and you can add a D and another L to the list.

Many will doubtless disagree with this, but: Very Tiny fans are not the finest exponents of creating an atmosphere in world football.

Ah well, these newspaper boys will have their little laugh.

And the Tiny Fans were very good at turning on their mobile phone lights at Wembley.  Best bit of the evening in fact.  I am sure they can do that again at the Ems.  The fact that it will be daylight doesn’t really matter.

It’s the stadium stupid: how West Ham, Tottenham, the government and us tax payers suffer.

Alexis’ time at Barcelona catches up with him as he is accused of tax fraud.

Do we actually need to buy anyone this January?

Ref Review : Sunderland – Arsenal: Was this not knowing the laws? Or just plain bias? The latter looks more probable

CL Ludogorets – Arsenal 2-3: a Liège comeback as predicted after 15 minutes