In essence, I am somebody who wanted Arsène Wenger to go a few years back. My head told me it was the right time for him to leave but now that time has arrived, I find my heart is reminding me just how much I owe him.

Untold, more than any other blog, has supported Arsène, revered him, celebrated him and defended him against critical all-comers including the likes of me who felt the need to try and explain on this site, mostly rationally and calmly I hope, how he was making mistakes and why he was losing followers. I am under no illusion: I did not convert a single pro-Wenger man.

It is what makes Untold special. Its philosophy (to act like the supporters the name implies and to get behind the Club, the Manager, the team, regardless of results and performances) is not an easy one to pursue or uphold. It is easier to let rip, especially in the heat of the moment, to criticise, moan and…well… lose hope.

Only time will tell whether we will regret Arsène going or whether we will enjoy better times than we’ve had recently (Not that recent seasons have been so devoid of success and joy).

Only time will tell us what kind of Club we now really are.

Are we a Club that Arsène sustained above its natural level or are we a Club that was being held back by him? Do those who run the Club really mean what they say; “compete for and win the major trophies”? Do they have a realistic understanding of what that means and what it takes? Do they have anything like the financial resources it seems to take? Or the right understanding of the kind of internal culture or drive or intensity a Club needs to fuel itself with to achieve that kind of ambition, especially in the modern game?

Whether Ivan and Josh can or cannot forge an effective working relationship between themselves or with newly appointed football executives is a critical question. I am encouraged by the scouting changes we’ve made, and the appointment of a “Director of Football Relations” but it will need good executive management and team-building skills to bring if off.

What kind of strategy will the Club pursue in terms of getting Mr Wenger’s replacement? Will the business and Club reputation imperatives rule? As in, will Stan and Josh require, demand even, an immediate and strong uptake of Club Level and standard season-ticket renewals, the speedy end to empty seats in the stadium, a quick return to the Champions League, and therefore a full realisation of maximum income from sponsorship monies? Will they expect a fast end to the club’s reputation being undermined by team performances, crowd dissatisfaction and fan in-fighting?

Or will the Club ride-out the immediate pressures and, instead, give the new man a 5-6 year project which is about a deeper and more patient rebuild towards a new era?

Each of these two approaches might require a different kind of manager. Perhaps a big name with a big personality and tons of experience for the quicker fix or an up-and-coming younger, less experienced man for the patient rebuild? And anyway, are the right kind of people available or prepared to accept those kind of briefs? Perhaps the Club will have to change its strategy based on who it can get.

So much is unknown, so much is new. But a new Arsenal will emerge, a Club being built by a new group of decision makers.

And Untold will, I’m sure, support and get behind them whatever decision is taken and whichever direction the Club takes.

The final unknown (and a critical one) is what kind of fanbase will emerge post-Wenger. In my opinion, the Club allowed the bad atmosphere from and between fans to fester because it didn’t recognise the need for change earlier than it did. Others here will argue that actually it was the media’s agenda that caused it, or the general nature and influence of social media, or the referees conspiring to cheat on us, or the AAA. Maybe all of these things contributed to creating the perfect storm, but I hope the fan feuding will abate… and that Arsenal fans haven’t become forever addicted to taking sides among themselves.

Whether it intended it to be a place of dispute and debate originally or not, Untold has often felt as though it became just that. To be fair, Untold has another remit in its brand mission which is to comment on or expose stuff that is hidden or superficially assumed or inaccurately stated. No matter how worthy and morally right that surely is, in itself it can cause debate and conflict or, at least, fuel and fan the flames. Especially when, as Psychologists tell us, people are very rarely dissuaded from their own opinion, no matter how factually wrong, because they have a deep human need to save face or preserve a sense of self identity and worth. All humans of all opinions are prone to this.

Arsenal fans, more than ever, need channels to reconciliation; both among themselves, and with the Club. ArsenalFanTV especially needs to heed this notion. But any Blog or fan group has a role to play in this.

So I apologise for my contribution to the divisive debate of the past and hope I can make a small contribution to joining Gooners’ hearts together more successfully in our new future.

To that end, having released a song “Red Shirts, White Sleeves” last year, I have recently released two new Arsenal celebration songs; one in support of my favourite post-Invincibles player, “When Santi Plays (I Swear the Football Smiles)” and the other, my small tribute to our departing hero Arsène Wenger, a song called “Au Revoir My Friend”. Written 100% by my heart.

If you fancy a listen, you can watch a Lyric Video for both songs on my YouTube page here:

You can even download or stream the songs from the likes of iTunes and Spotify etc.

If you watch and like or (in my dreams) even buy, I’d appreciate a few “likes”, thumbs-up, retweets…you know the game. If you don’t like them, well thanks for giving them a go

I’m looking forward to being at what I’m sure will be an emotional, respectful and loved-filled farewell to Le Professor against Burnley.

And then to a new future, whatever it brings, with all of us, I hope, once again of one voice. 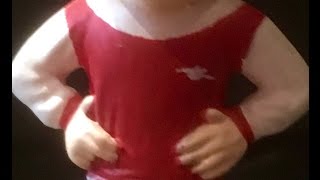 29 Replies to “Hoping a hero’s sacrifice will lead to the future we dream of.”