By Gordon Haverland, with additional commentary within the article by Tony Attwood

The question has been raised: why do teams generally do better at home than when they play away?   There are many possible answers, but one is that the referee treats away teams differently from home teams, perhaps being more lenient with home teams in terms of the tackles that are allowed.

For every Game Day of the 2018/19 EPL season, I have collected the number of treatments a referee has overseen, the number of minutes teams played short-handed due to a need for treatment, and the number of substitutions required.

C0lumn 4:  Difference between home and away treatments in numbers

Of the Top-4, only Martin Atkinson is “even” in terms of the number of treatments between home and away teams. Lee Probert is close at -2 meaning there were more treatments for away players, as is Anthony Taylor at -3. I would suggest that Andre Marriner and Jonathon Moss are unacceptable at -6 and -8 respectively.  Away players are clearly in danger when playing under these referees.

Column 5: Difference between home and away treatments in minutes

Part of overseeing a large difference in the number of treatments needed by home and away teams, is a likelihood that the amount of time the home or away team had to play shorthanded is likely to be quite different from zero, and again Marriner and Moss are at -15 and -18 minutes respectively meaning the away teams are being placed in a much more difficult situation playing a man short.

Column 6: Difference between home and away substitutions

If a referee is overseeing a lot of treatments, it is possible there will be a lot of substitutions. Marriner, Moss and Probert are all showing a tendency to oversee more substitutions by the away team due to the need for treatment as a result of how they manage the game.

Column 7 and 8: Home and away substitutions

I added the Home::Away substitutions to the end. By and large, Moss and Probert are only seeing the need for the Away team to substitute players that need treatments, while Atkinson is equally hard on Home and Away. 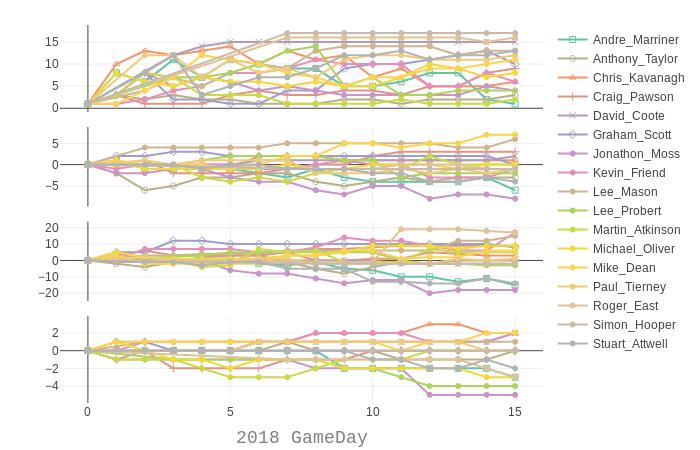 The number of treatments (home plus away) was used to rank the referees, and the top plot shows how the rankings have evolved over the season.

The next plot down (#2) is the difference in the number of treatments between Home and Away. Mike_Dean and Lee_Mason cause the most treatments to the Home team, while Jonathon_Moss and Andre_Marriner are hardest on the Away team (Game Day 15).

Plot #3 is the difference in short-handed playing time due to treatments, Roger_East, Kevin_Friend and Lee_Mason are causing the most short-handed play for Home, while Jonathon_Moss, Stuart_Attwell and Andre_Marriner are doing the job on Away.

The plot itself was generated in R using the plotly library. This is likely the first and last time I will be using plotly, I don’t like the idea of having pay for a commercial version in order to generate a graph that I can edit to improve how it looks.

7 Replies to “The treatment of injured players: is there a home/away bias?”