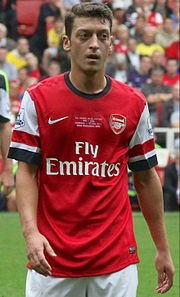 This season the Premier League has ventured into new territory by exploring the notion of having a significant growth in the number of players in squads who are deliberately left out of their clubs’ 25 player list.  We are all familiar with Ozil and Sokratis, but there have been others: Phil Jones, Sergio Romero, Danny Rose, Jean Michael Seri, Yannick Bolasie…

The exclusion of players comes about because there appears to be nothing in UK law and nothing in Premier League rules that says that employers have to give employees actual work to do, and besides )it is argued) players have always been at risk of not being selected by a manager.  But being on the books and not even listed in the 25 is something of a new development.

It is just one of the issues within football, and it may be what the former Football Association chairman David Bernstein had in mind when he called the governance of football in England “a shambles”.

He also asked the government urgently to hold a “fan-led review” – as indeed was in the government’s 2019 election manifesto.  Somehow though, it hasn’t happened.

Bernstein however is not completely blameless in terms of zero reform of the FA since he was the FA chairman from 2011 to 2013.   He also organised a closer relationship between the FA and Fifa, something which hopefully he now utterly regrets, given the number of court cases they have since faced and are still facing.

Hugh Roberston, chairman of the British Olympic Association, called football “the worst-governed sport in Britain”, last year, but said that “some progress” had been made since then.   But not much I think, in that before leaving, Bernstein wrote: “The governance of our national sport remains a shambles.”

I suspect many might agree that it reflects poorly on Bernstein that he took on the job, knowing he would only hold it for a short time, and then could make such a comment.

Meanwhile, the Saving the Beautiful Game campaign group, which includes Gary Neville and David Bernstein said, “The governance of our national sport remains a shambles,” adding,  “English football’s failure to speak with one voice over the past months of the Covid-19 crisis have only highlighted a dysfunctional and damaging structure.

“There is no overall leadership and therefore vested interests continue to prevail. The financial disparity between rich and poor has frankly become obscene.

“English football’s failure to speak with one voice over the past months of the Covid-19 crisis have only highlighted a dysfunctional and damaging structure. There is no overall leadership and therefore vested interests continue to prevail. The financial disparity between rich and poor has frankly become obscene. The game is devoid of agreed priorities.”

The Conservative party promised in their last manifesto that it would, “set up a fan-led review of football governance, which will include consideration of the owners and directors test, and will work with fans and clubs towards introducing safe standing”.

Not much has happened except that Bernstein has asked for an independent regulator, and another review.  I’m not sure how many reviews we have had, but quite possibly several.  Or more.

Bernstein wrote, “Secretary of State, the need for reform grows more urgent every day. I think we are both aware of the current threat to the very existence of football clubs, small and not so small, that are the lifeblood of many communities you serve north and south. The momentum for change has surely never been so strong and so unanswerable as it is now.”

The Football Supporters’ Association, said, “We are sympathetic to the strains on government imposed by the pandemic, but given the stresses on football now, we share the feeling of urgency about the need to make progress with reform.”

Someone at the Department for Digital, Culture, Media and Sport said: “We have been consistently clear that football clubs are a vital part of their local communities and must be protected, as we work to recover from the coronavirus pandemic.

“Whilst our priority is the immediate future of clubs, we continue to have regular discussions with the football authorities on the future direction of the sport, and how to ensure it is sustainable. We have committed to a review of football governance, with input from fans, and will announce further details in due course.”

Translated that means, “nothing happens and don’t hold your breath.”

And so clubs are allowed to keep players under contract but not play them, although we are told that Mesut Özil might join Fenerbahce this month although DC United in the USA are interested.   The cost to Arsenal this season alone has been around £9 million in salary and probably another £9m in a transfer fee, had the club managed to do the deal last summer.

The Guardian recently made the point that Özil’s comments about the treatment of Uighur Muslims in China, displeased Arsenal, but as it turned out, he was merely a month or two early in reflecting the policy of the government of the UK. Maybe Arsenal should keep up.

One Reply to “Bernstein on the governance of football; it doesn’t quite ring true”