You all know the outcome of the game a thumping 4 – 0 win.  Arsenal Women showed that not only is North London red, but that it is likely to remain so for a considerable period into the future.  In only their third season in the WSL, Spurs were second to Arsenal in every department of the game.  They didn’t have a serious shot on target all game, were second to just about every ball and had no answer to our attack.

The game will probably go down in the history books for the records which were broken.  We sold nearly 54,000 tickets, had over 47,000 in the ground and have now gone a record eight matches in the WSL without conceding a goal.  We are also top of the league.

It was a really nice fun day out in the autumnal sunshine.  Getting into the ground was relaxed, far fewer stewards on duty and no visible police presence (there is no requirement for police at Women’s games; long may that be the case).  As a season ticket holder I was given a seat in the lower tier, row 5 and as near the centre line as possible you can see from this image.

Whilst there seemed to be a lot of empty seats with 10 minutes to go to kickoff, by the time Beth Mead scored in the sixth minute the place was really pretty full and there was a great atmosphere.  The crowd were fully behind the team.  The late Maria Petri would have been proud.

Jonas Eidevall struck a bit of a surprise by starting Caitlin Foord instead of Stena Blackstenius as our centre forward along with Katie McCabe as wide forward.  But his selection proved to be spot on as at no time were Spurs able to cope with Caitlin’s direct running.  Her running style is unorthodox but undeniably effective and she is aggressive in the high press we are playing.  Katie also is direct and one of the feistiest of our team and always looks to fill the centre-forward slot when Caitlin drifts out to the left wing.

Beth’s early goal settled any possible nerves among the crowd and we could all enjoy the game secure in the knowledge that we weren’t going to allow Spurs a toehold in the game.  For all Tottenham’s stated ambition to challenge for the Champions League places, their squad and resources are nowhere near that level yet and it showed.

My one concern was that Vivianne Miedema still seemed somewhat off the pace for much of the first half.  She was working hard but just not at her best.  But at the end of the half she showed that she still knows how to finish.  The Spurs keeper made a hurried clearance, the defender to whom she passed the ball was pressured by Foord and the ball came to Viv one on one with the keeper.  An unerring shot onto the bottom left corner of the net and a resulting ripple of the onion sack showed that her finishing skills are still intact.  Two nil at half-time and only one team in it.

In the opening minutes of the second half Spurs were a little more proactive but it didn’t last long.  Another Beth Mead corner and our Brazilian centre back Rafaelle rose highest and her header was in the back of the net.  Not long after we had the rarest of goals, a header by Vivianne Miedema.  Her first-half goal clearly flicking a switch as she looked far more interested than in the first half.  No further goals but useful minutes for Jordan Nobbs in her 150th WSL game I believe, Stina Blackstenius and Lina Hurting with Lotte Wubben-Moy and Frida Maanum came on for cameos at the end.

Lina replaced Beth Mead who got the longest standing ovation I can ever remember.  Directed to leave the pitch on my side she had to walk halfway around the stadium to get back to the bench.  She certainly didn’t rush as she was serenaded by the crowd the whole of the way.  A moment I’m sure will be with her for a very very long time. 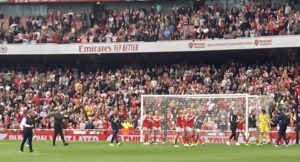 After the game most of the crowd was in no hurry to leave the stadium and there was almost an end-of-season party atmosphere.  The players, some with their young children took a leisurely lap of honour and were loudly cheered all the way round the ground.

With Meadow Park at Borehamwood holding about 4,000 fans when full and previous crowds at the Emirates only a few thousand, the majority of the crowd will never have seen Arsenal Women from the inside of a stadium.  They were treated to a wonderful team performance and a chance to see England Heroines in the flesh so to speak.

I hope that they will all return for the WSL matches against Manchester United on Sunday 20 November and Chelsea on 15 January.  Hopefully we win our next Champions League qualifying match on Wednesday and there will also be at least 3 more games at the Emirates.