I think for those people who understand German and who know a bit of German geography the title is somewhat double in their meaning. People who know the German geography will say: now wait a minute Essen is a city in Germany just as Dortmund. And despite Essen and Dortmund both being in Nordrhein-Westfalen there still is a gap of some 35 km between both cities. So the geography connoisseurs can be relaxed this isn’t what I meant. Also would be rather stupid as when driving from Belgium to Dortmund you first pass the city of Essen on the highway.

So what does “Essen in Dortmund” really means? Just simply : eating in Dortmund. Or in other words and much to the delight of a few of our regular readers: the food report!

As we got news from Arsenal that we had to pick up the tickets between 2-3 in the afternoon on match day I had to leave early from Belgium. In the company of Sven (one of our members) we took off around 10.30. I knew there were a few road works before Dortmund so I calculated an hour of extra travelling time.  But apart from one moment when all I had to do was take the correct lane to stay on the highway we had no real trouble. Of course we had to slow down our speed during the road works but nothing really worth mentioning. The big part of our travelling group that came in the afternoon wasn’t so lucky and suffered some delays.

So the first job was to make sure I knew the right place to pick up the tickets and my GPS brought me to that place but we were one hour early. As it was 13.00 we felt a little bit of a gap in our belly and went on the search for something to eat. We had to drive a few kilometres and in the end I found myself driving around “the block” of the Dortmund stadium. A rather big block of some 5-6 kilometres. This is also down to the fact that the stadium is situated in a big park of course.

Just as I thought that we would end up with an empty stomach I found a little restaurant along the road. A little Turkish restaurant. Sven didn’t mind Turkish food, neither did I and we pulled our car on to the parking space.

We were met with the biggest possible smile and bewildered look on the face of the owner and chef. Mehmet (not his real name but I just will call him that) stood in his yellow Dortmund shirt behind the counter of the Pita bar and gave us a friendly welcome. The whole place from top to bottom was one big Dortmund place. Pictures of the players on the table under the glass (only two real tables inside by the way), pictures on the walls, pictures on the floor, on the ceiling…it was all yellow and black.

The conversation was held in German but I will make it easy for you and translate it of course. But he welcomed us with the words : so you came here to lose today? I kindly reminded him of last season score and said that I would hope for a same result. It all was in a very nice and friendly way that we talked about our teams. Some friendly banter, some nice respect for each other.

But of course we wanted to eat something and Sven and I took the Doner durum. If you don’t know it just check this

Another costumer who had been following our conversation went out and wished us a good result on the evening. I had a sneaky feeling he was a Schalke supporter.

A little tip if you go there if the owner asks to not only give you the usual garlic sauce but also the red sauce make sure you can stand hot foot. It was a hot pepper chili sauce and you could feel it when you put it in your mouth. But I don’t mind some hot food from time to time and it tasted just as it should have tasted. The price for the doner durum was 4 euro or just £3.15. That’s right 3 pound and 15 pence. Added a bottle of coca cola of 50 cl that cost another 1.50 euro or in £ 1.18. So in total it was 5.5 euro or £4.33.  After that I didn’t have any more desire to eat untill we were at the stadium some 5 hours later! So good value for money when it comes to keep away any hungry feelings.

After our meal we went back to the hotel in the hope of seeing some players or let alone the manager or Mr. Gazidis but despite a lot of red ties hanging around in the lobby and at the frond of the hotel (and lots of body guards with grey ties) we couldn’t see anyone we recognised. But the people from Arsenal who had the tickets were present and that was the most important of course.

We then went to the Ritterstrasse where the German gooners had invited any Gooner who wanted to join them before the match. We drank a bit, talked a bit and then went to the stadium to meet the rest of our group.

We did this in a place called “Rote Erde” and that is the former stadium where Dortmund used to play before moving to their big stadium. 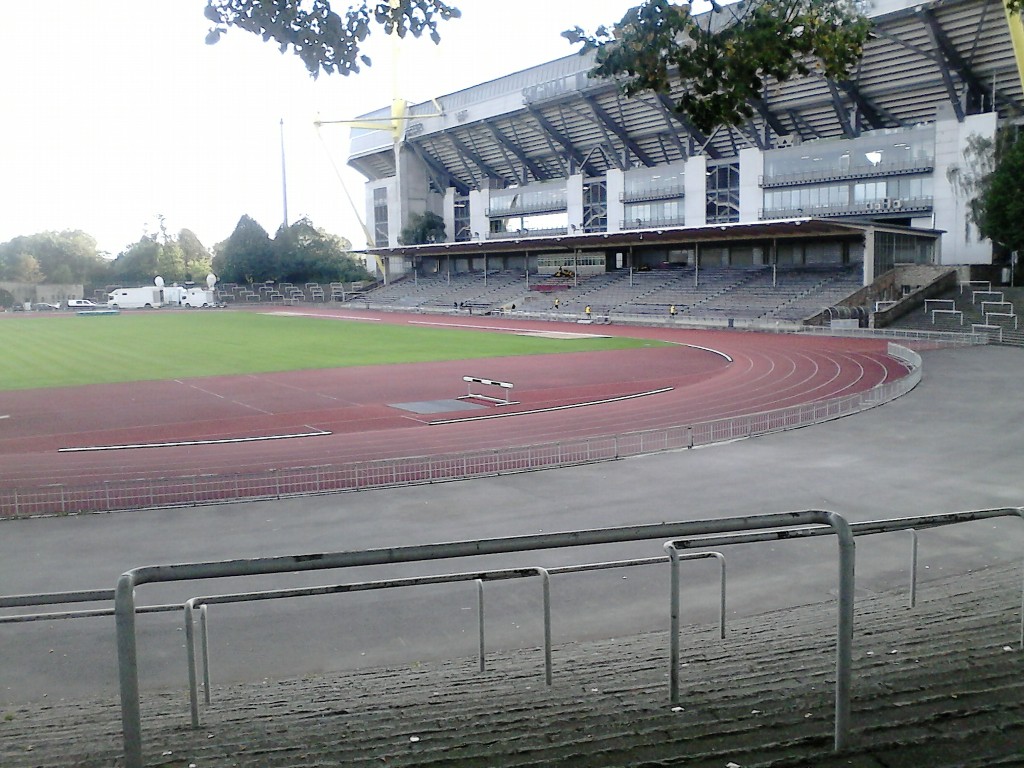 There was beer, soft drinks (lucky there was) and of course…..the Bratwurst you all have been waiting for. 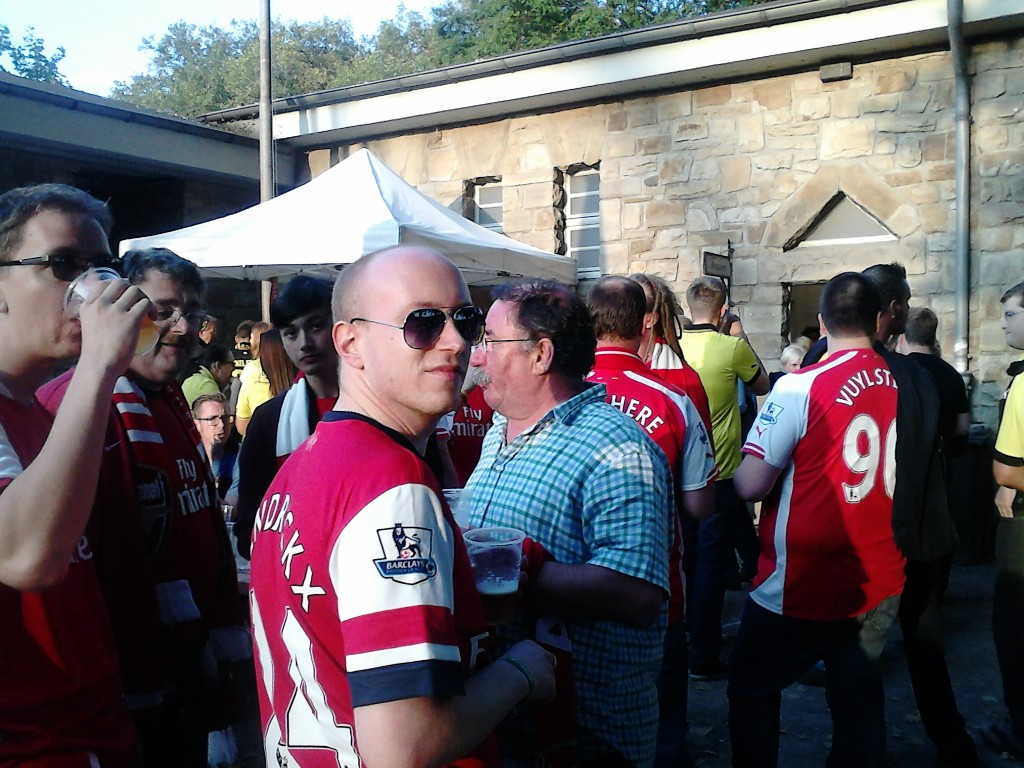 Problem is when standing or sitting near by the place where they make the Bratwurst you get the smell and then you get hungry. So I took two of them. Not together of course. But one early on and another just before we would make it in to the stadium. To make sure I wouldn’t feel hungry inside.

After having visited German football grounds for a few years now I can say that the quality of the Bratwurst is still on a very high level. Juicy, greasy, hot with mustard or ketchup as you like and on a pinch the bottle yourself basis I once again wondered why this food still hasn’t gone out and conquered the world. Ok it’s not my daily kind of food but on a day out on a football ground…it is the best you can eat I think.

It was nice out there. We talked, laughed, had nice conversations with nice friendly Dortmund supporters. The general feeling of respect was there. We wished each other a good game and a fair result. The latter happened. The first only for the Dortmund supporters. But that is football. Sometimes it doesn’t work out and you have to accept it.

Another nice experience in the city of Dortmund (not really football wise of course) but it was nice to be amongst our fellow Gooners not only from Belgium but from all over the world. It was nice meeting the Dortmund supporters who even after the final whistle behaved respectfully and didn’t  try to get some kind of unwanted reactions from Arsenal supporters. They were delighted of course but the respect remained till the end. And so I cannot but respect them for the way they have been behaving towards us Gooners all these times I have been there.

There is an index to recent posts, a guide to today’s anniversaries, and details of our other sites on the Untold Arsenal home page

6 Replies to “Essen in Dortmund, and the catering review”