The Referee appointments for Arsenal games don’t get any better, but for followers of Untold that will hardly come as a surprise.

Mr Mason’s 11th game of the season and his first for Arsenal, second for Newcastle.  Mr Mason is Lancastrian and chairman of the Bolton Referees Association.  He has been a Premier League referee since 2006.

“ Wilshere  was like an outlaw on the field and I mean this as a person who was not allowed to go in to any challenge or being called back for a foul but on the other hand could be pushed, pulled, kicked without that the ref would give a foul to Arsenal.  But this same Wilshere scored a vital goal for us. His shot took a slight deflection on Olsson and ended up in the back of the net.”

Cardiff 0 – Aaronsenal 3  30 November 2013 – Cardiff 0 Arsenal 3.  An Inspired Aaron helped us to a fully justified three points, Cardiff played football and not rugby and thus the main threat from Mr Mason was nullified.

“Now of course when you play bad it doesn’t mean that the ref should assist the other team. I have seen the “foul” from Mertesacker a dozen times now and I really cannot see what was the foul. He cleanly played the ball and then the Southampton player went down. This was never a foul. To ad insult to the injury Southampton scored from the free kick that was given.

Then we have to give credit to Mason.  He made a right decision. He gave a red card against Flamini for a two footed tackle. He got the ball but it doesn’t matter. It is a reckless and dangerous tackle and a red card should be given.”

Norwich – Arsenal, what a pair of goals!  11 May 2014 Norwich 0 Arsenal 2.  Another Ramsey special and a first for the Corporal (I do wish we hadn’t loaned him out to West Ham this year – he does seem to be improving steadily and not being given too much grief from referees over imaginary fouls).  Norwich for once playing football and not injuring our players.

None of these games had either Mr Burt or Mr Halliday, Mr East was fourth Official for the Swansea game

Match Review: Lee Mason – Stoke City Vs Arsenal (0 – 0) [26/08/2012]  55% overall, bias against 26/74 and five wrong Important Decisions (Second Yellow, Red Cards, Penalties or Goals).  In Minute 7 Wilkinson threw himself in front of a ball that was going into the goal, his arm was outstretched and prevented the goal.  Should have been red card and penalty.  In Min 38 Arsenal should have had a second penalty, in Minute 57 Gibbs shoved pennant in the penalty area – should have been a Stoke penalty and in Minute 63 Stoke should have been further reduced following a nasty studs up challenge.  Awful refereeing and it cost us two points.

80% overall, bias against 0/100, no wrong Important Decisions.  An excellent first half, one wrong call in Minute 2 Gibbs wasn’t offside.  The second half wasn’t quite as good with a number of wrongly called or non called fouls and another wrong offside against Gibbs.  Better this time but all eleven wrong call against Arsenal.

There were 6 reviewed games out of 24, here are his Important Decisions

Who was his least favoured teams – why Arsenal of course along with QPR and West Brom. and his favourites Everton and Stoke 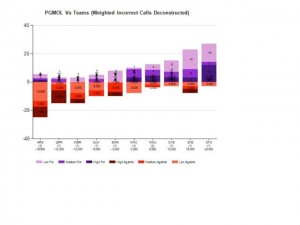