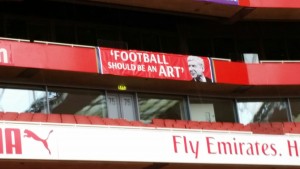 So for the second Champions League match running we are playing a club whose ownership is deeply involved in scandals and corruption allegations.   Oh well, so it goes.  Funny that the press in the UK don’t seem overly concerned.  Why is that I wonder.

But at least we have our banner to look at.

We’ve risen up the table to 5th which is unfortunate, but one of those who was injured – Francis Coquelin – is training again, and may or may not play tonight.   Mathieu Flamini and Mikel Arteta are out with minor problems – so it is the curse of the year of the seven left backs again – or not as the case may be.  Here is the chart as supplied by Physioroom.com    They have Welbeck, Rosicky and Wilshere as the three long termers plus Arteta and Flamini – so they too are counting Coquelin as ok.

The house team of the PGMO have no excuse for their current state of affairs having only one injury.  And indeed not to Swansea.  Giroud is suspended through being sent off the last time round, so that suggests exactly who is going to be in the number 9 position.

Alexis Sánchez is back scoring which doesn’t mean he will do that every game, but as Alex Oxlade-Chamberlain was quoted as saying, “…he’s one of the most passionate and hungry individuals I know.

“It’s his everyday mannerisms around the training ground, how he trains, his performances, how he scores goals, how he plays and how he defends from up front. These are all things that we can all learn, that everyone who watches football could learn from. I’ve definitely put myself in the bracket of somebody who learns from him every day.

“If he knows when he’s not at his best, which is rare, he’ll always push himself to do as well as he can and he demands a lot of himself.”

Olympiakos in the Champions League was where Oxlade-Chamberlain announced himself as he was the youngest English player to score in the competition.

And then we have Theo Walcott who has scored 12 goals in his last 13 Arsenal starts and Alexis who has just scored a superb hattrick.  That’s not a bad pairing.  Put the Ox on the other wing and their goal keeper won’t know what is going on.

The eternal Greek champions’ centre-backs – Dimitris Siovas is not known for his ability to cope with pace so we might be onto a winner there and  as one commentator put it “Per Mertesacker could give him a head start and beat him”.   Siovas (it is suggested by those who know more than me) is also lacking a bit of composure these days.

So by fair means or some variant Olympiakos have won the Greek title for the past five seasons and have won all their domestic league games so far this season.  But we’ve just beaten Tottenham and Leicester without any aid, and we usually beat them at home, so that’s ok.

Olympiakos midfielder Luka Milivojevic is suspended following his dismissal  in last season’s Europa League and Manuel da Costa is also out with a knee injury.  Here’s  their league table top 10.  Anything strike you as fishy?

.
And so onto the team…
.
Ooooooooooooospina
Monreal Koscielny, Mert, Bellerin
Cazorla Coquelin
Ramsey Özil Alexis
Theooooo
.
The all out attack alternative has no Coquelin and The Ox playing.
.
The records show that there are always goals in Olympiakos games in the Champs League and its qualifiers, and that we usually score against them when at home.  Indeed Olympiakos have conceded at least two goals in seven of their last eight European games.   We’ve beaten them at home in each of the last three matches against them scoring two or more each time.
Overall we’ve played them six times before in the Champions League and we are unbeaten in eight home contests against Greeks, whether or not they are bearing gifts, winning six and drawing two.
Olympiakos have lost five successive away games the Champions League and lost on each of their last 12 games in England, letting in 37, scoring three.  Strange how they do so well in the league.  (There’s a possible reason in the last article on Untold).
.
Here’s our league table (since I’ve printed their’s).
.

40 Replies to “Football Should Be An Art: Tonight’s match against the rather dubious Olympiakos”