Arsenal has numerous regional supporters clubs across the UK, as well as an official supporters club in 62 countries worldwide, with another 20 countries currently in the process of submitting applications.   You can see a full list of the clubs here.  The UK regional clubs are listed at the top of the European section.

In addition Arsenal formally recognises Red Action who for over 10 years have worked with Arsenal to develop the atmosphere within the stadium, and Arsenal Independent Supporters Association which liaises with the club on issues of concern to supporters.

Untold Arsenal is completely committed to the work of the supporters clubs.  As he explains in the article below, Walter is President of Arsenal Belgium and Tony is Chair of the AISA Arsenal History Society, and a committee member of AISA.

As you probably know by now I am not only writing for Untold Arsenal but I am also the chosen president of the official supporters club in Belgium which is called… yep you guessed it right: Arsenal Belgium.

Now I must say chosen is maybe not the right word. Because when the first president of our supporters club ended his tenure in office,  the group that formed the new board had to pick a president. And as nobody said: I want to be president it was silent for a moment.

Then someone said: ‘Walter I think you should become president’ and despite me struggling for a few moments and pointing out others who in my eyes were more valid candidates for the job all fingers were pointed at me. And so since that day I am the proud president of a fast growing supporters club.

One of the most important things for a supporters club is to get our members to matches. And as our membership has gone through the roof since the new board was installed it is more difficult than ever to give everyone the chance to go to games. But the board is working hard to reach our goals and we probably (if all goes well and Arsenal gives us the tickets we ask) will be able to do this, as we did last season.

I don’t know if there any readers from Untold who are involved with supporters clubs (actually I do know there are …) but those who are members will know that until recently it was Jill Smith who did the liaison between Arsenal and their supporters clubs. Jill has retired now and Mark Brindle is the new man in charge.

I think it was his idea to let the supporters club have their say about the problems they face with the tickets and other benefits that being a member of a supporters club should bring.

As usual and one has to keep that in mind, not everything that supporters clubs ask for can be done. I’m using random numbers of course but if Mark can only distribute 500 tickets per match to supporters clubs and he has a demand for 1000 tickets he has to cut somewhere. It’s not nice to see your demand cut but from what I heard on the meeting this is the same problem for all supporters clubs.

The fact that Arsenal brought in people from other departments to help Mark in this meeting and to make sure our problems were properly noted, as they listened to what we wanted to see improved shows that Arsenal does care about its supporters clubs. But it is good to be able to voice your concerns and problems to Arsenal. And to see that they are not taking us supporters clubs for granted.

I heard something say that now there are some 150-160 clubs recognised worldwide and some 30 new clubs have asked to become an official supporters clubs. More clubs, more members means fewer tickets in general for the already existing clubs. But the good thing of course is that this also shows that Arsenal is a club that is growing over the whole world.

After having discussed a few things, we showed off the flag we carry to our matches wherever we go… 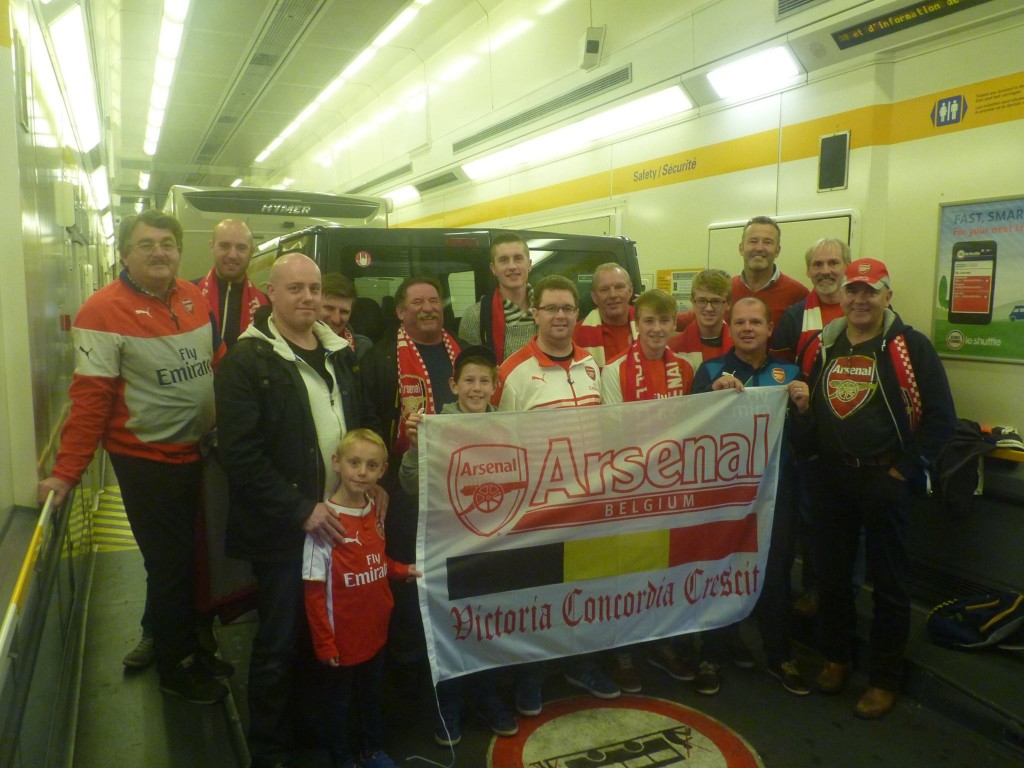 Now tell me isn’t that a nice flag?

… and the Arsenal representative found it so nice he wanted to take a picture of it. Well we are rather proud of the flag and it seems to bring luck so far, as we always win when it is in the stands. Marcel, take your flag to Munich when you go please!

But when the meeting was over and we were off to some free sandwiches and some dessert offered by Arsenal the representative from Arsenal Singapore came up to me asking if I was Walter from Untold. He told me he was a big fan of Untold and a big fan of our work on referees.

Then the representative of the Saudi Arabia supporters club came joining us and wanted to be on a selfie with me and the Singapore member. Ah that feeling of being a superstar…. Oh well… not really but it sure is nice when people come over and say something nice about Untold Arsenal and the work we put in to it.

I do admit that it gives one more energy to continue the job we do. And it is nice to speak with our readers face to face. And it is great to hear that they support our work. And the opinion of one reader is as important to me as is the opinion of… let us say… Ivan Gazidis saying that our ref previews are usually spot on.

It was a nice meeting with the rest of our supporters clubs, well organised by Mark Brindle and the people who assisted him. It felt good that Arsenal wants to listen to their supporters clubs. It was great to speak with some of our readers on the day. It all was part of the great experience that our trip was once again.

8 Replies to “The supporters clubs meeting, being recognised as a star…. attending a function at the Emirates.”