Why is it that football clubs make such easy pickings for criminals?  We’ve often noted clubs from Portsmouth to Rangers and the way they have been destroyed from within and you might wonder if the Football League and Scottish League shouldn’t by now be alert to the tricks that crooks play within football.   But no, it still goes on and on.

Indeed we’ve even followed the progress of the injunction seeking hedge fund that thought it would be amusing to play with Coventry.  But still it goes on, and there are still no robust regulations in place to stop this happening.

Worse, as a taxpayer in Northamptonshire I now find some of the hard earned cash of some of my friends who live in Northampton has been used to fund the antics of a crook or two.

Rather late in the day the local police force has woken up and launched a criminal investigation into Northampton Town FC and its financial affairs.  The problem, and the reason my friends paid for a bit of it was that the local council made a £10.25m loan for a new stand at the ground.

The Sixfields Stadium was built from scratch in 1994, so it is only 21 years old, which is a very short lifespan for a stand.  What’s more there is nothing wrong with the ground.  They don’t need more places.  The ground has 7600 capacity.  Last season the average was 4599.

So £10.25m has gone missing and as noted earlier on Untold, the players were not paid in October and November, there is a winding-up petition served by Revenue & Customs and the council has applied to put the club into administration.  Here’s the missing stand – it used to be complete and have people in it on match days. 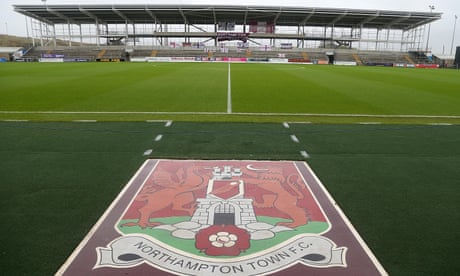 No one knows where the money went.  The developer, Buckingham Group, stopped work a year ago having been paid less than 5% of the money due for the stand so it walked off and sued the company overseeing the development company.  The director at Northampton who set it all up promised to finish the job, but nothing happened.

Everyone denies any wrongdoing and each person involved says they have explanations for what has happened to the money. They are just not telling us.

But then it got a bit spicy, as police investigating what happened to the £10.25m were asked to widen the investigation to include payments made to the Conservative party constituency office of the council’s former leader, David Mackintosh, now the MP for Northampton South.    Howard Grossman, the property developer whose company, 1st Land Ltd (now wound up) failed to complete the stand at Sixfields having had the council loan, paid £6,195 in November for tickets to a general election fundraising dinner for Mackintosh.

Then, it is reported, three associates of Grossman’s made donations of £10,000 to the Northampton South Conservative Association while Mackintosh was the council leader,  at least double any other donation by individuals in 2014. According to the BBC investigation, “one £10,000 donation, by Gary Platt, formerly a director with Grossman in one of his companies, County Bideford Limited, was not declared as it should have been to the Electoral Commission.”

The MP has not responded to questions about the payments.  It was Mary Markham, Mackintosh’s successor as leader of Northampton borough council, who made the formal complaint to Northamptonshire police about the missing loan money, and asked the police to also investigate the donations, including the failure to declare one of them.

So the question is, why did the council throw money at the football club without having proper securities on their investment, how come their oversight was so bad that they allowed it to get this far, and where did the £10.25m go?

A takeover of Northampton Town by Kelvin Thomas, a former Oxford United chairman, is proceeding, after the council agreed not to seek repayment from the club itself.

Meanwhile up the road at Leeds, insanity of a different type rules.  They are owned by Italian tax evader Massimo Cellino, who has been banned from running a club by the League but continues to do so, because every time he is banned he appeals.  One might imagine that if Cellino is fit and proper so are most financial criminals.

In essence a person is barred from being a director or owner of more than 30% of a league club if he or she is convicted of a criminal offence of dishonesty.  Yet Cellino has been banned for a second time, but is still running the show because he is appealing.

He did say he would sell the club to Leeds Fans United four weeks ago for £30m he then changed his mind.  But meanwhile he is about to be banned (most likely) from having 30.01% ownership.  But probably nothing will happen.  Last time he resigned from his post before returning to the club’s board as chairman upon the expiry of his disqualification.  He’ll probably do that again especially since the League did nothing about the fact that he did not get rid of his shares but simply carried on owning them.

No address is given at Companies House for the ultimate corporate owner Leeds Utd save for a property development company in Cagliari.  The owner of that company is not revealed.

When asked how Cellino complied with the ban on ownership last time The Football League would not say, as it was a “confidential” matter.  That gives me a lot of faith not least because if he did dispose of ownership last time there should be a record of it coming back into his possession after the ban, and there isn’t.

We also have the fun of Tim Kerr QC, who ran the appeal last time, putting up the case that Cellino that could have evaded the tax without being dishonest and that dishonesty has to be proven.  The judge said that the evasion of over £300,000 import duty on a yacht had to be dishonest.

In another bit of fun, the ruling Conservative Liberal coalition in an effort to help crooks who might be inclined to give donations to political parties, reduced from five years to one the period after which a conviction punished by a fine becomes “spent”.   This time, if his appeal fails, he will be not “fit and proper” for only 223 days.

But there are more criminal cases against him pending in Cagliari.

The argument of “no convicted criminals to own our historic clubs” is a simple one.  The League says Cellino satisfied this test last time he was banned and no doubt he will again if he loses his appeal.  It is a useless protection; we do need something better.

7 Replies to “Northampton and Leeds in a mess; using taxpayers money, the role of the local MP; the hopelessness of the League.”