But now take a look at intercepts.  Leicester are way ahead of anyone else – which gives a real clue as to what they are doing to get to the top of the league.  However when we played them at Leicester we stopped that flow and did it back to them – a very clever tactic.

The website Thisinterestsme.com adds some data from earlier times.  Using data from the 2003-2004 season and onward, they generated details of the dirtiest Premier League football teams.

What links these teams is that they were relegation fodder.  Leicester are the only team in the list above that are currently in the Premier League.

So, instead we can look at team that have spent a fair amount of time in the premier division between 2003 and 2014.

Blackburn are here because they managed to stay in the Premier League until the end of the 2011–2012 season.  (“How hard can it be?”  as the Venky lady said).

Next the site turned to the dirtiest squads in recent memory.  Remember the Tiny Totts are the dirtiest team in the Premier League at the moment with 14.3 fouls per game.

Now these figures all come from 2003-14 period and yet all the worst figures come from the first three years in that era.

This graph from thisinterestsme.com shows that fouls dropped to 2011/12 but then started up again. 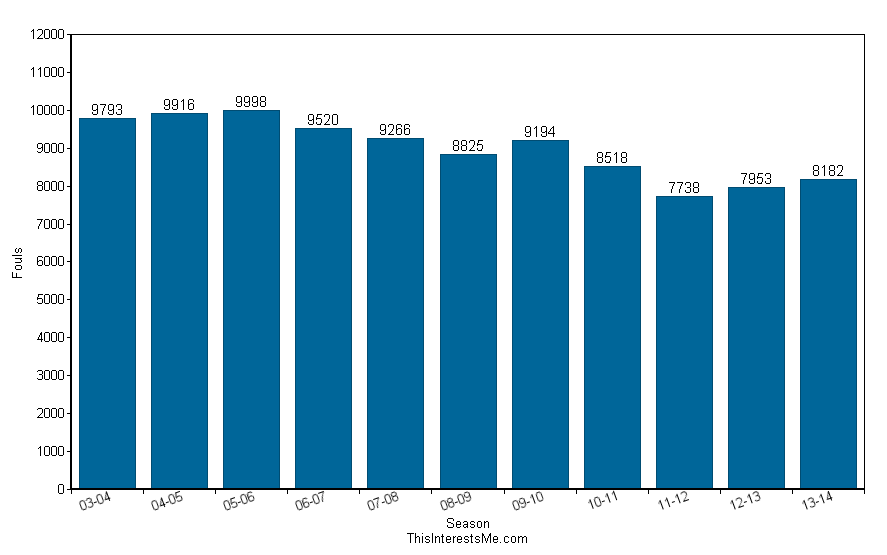 To verify this we can look at team with the least number of fouls?

Moving on there is the question of whether certain players are targeted by the defensive cloggers.  The most fouled player is Andrew Ayew from Swansea, followed by Alexis Sanchez according to figures from the Mail.

One Arsenal player.  Three for Chelsea all in a row.

So what can we conclude?

Fouls have been declining but are on the up, but of course we don’t know how much of this is managerial tactics, player incompetence, or a change in the way games are refereed.

Arsenal get the fewest number of yellows, and have almost the lowest number of fouls, and a fairly high number of tackles.  It shows a fundamentally different form of play from, for example, the Tiny Totts.

Woolwich Arsenal the club that changed football, is now available on Kindle at £9.99.  For more details and to buy a copyplease click here or go to Amazon Kindle and search forWoolwich Arsenal.