As I have written in my first article about my experience of being in a live show I now will go a bit deeper in to how such a few hours go for special guests. And I added a few pictures in to this article.

As anything outdoors these days it starts with a drive.  A 45 minutes drive from my house to the studios in the outskirts of Brussels near the airport. I had to be at Play Sports as you can see on the board outside the studios of Videohouse the company that takes care of this show. 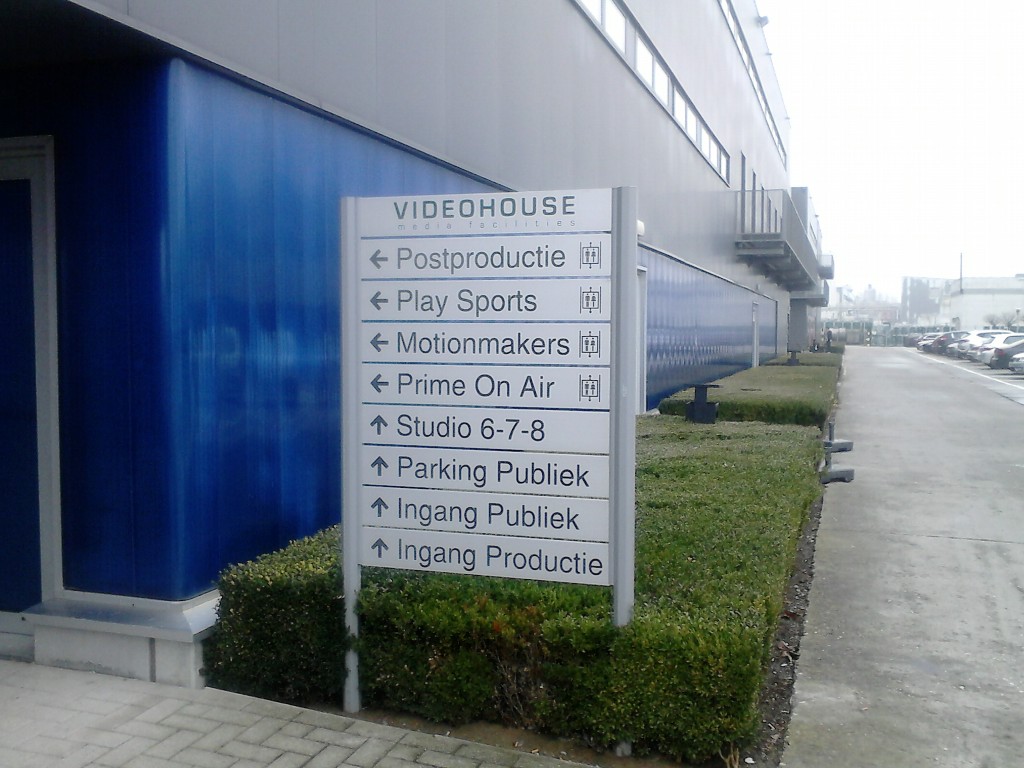 The entrance of the TV studios; I had to be at Play Sports

I had to call the producers who sent the elevator down and then it took me to the second floor. There was a big room with some 30 working places but only some 5 or 6 were occupied at that moment. The host of the show Peter Morren welcomed me and immediately took at dig at Arsenal saying we don’t need to go to Barcelona any more as that contest is over. I rather would like to shove these words down his throat but to be honest I hope we produce a miracle but not counting on it.

I then got to see the other people with whom I would sit in the sofa. Jan Mulder the Dutch pundit who can be seen in each football show in Belgium and Holland. He really is the top pundit in the Dutch language world one could say. He has a very specific way of speaking that makes him loved both in Belgium and Holland. Even when saying something bad about Arsenal he still can do it in a nice way. But he also can miss something that I  noticed during the match but alas didn’t get the chance to tell in the live show. 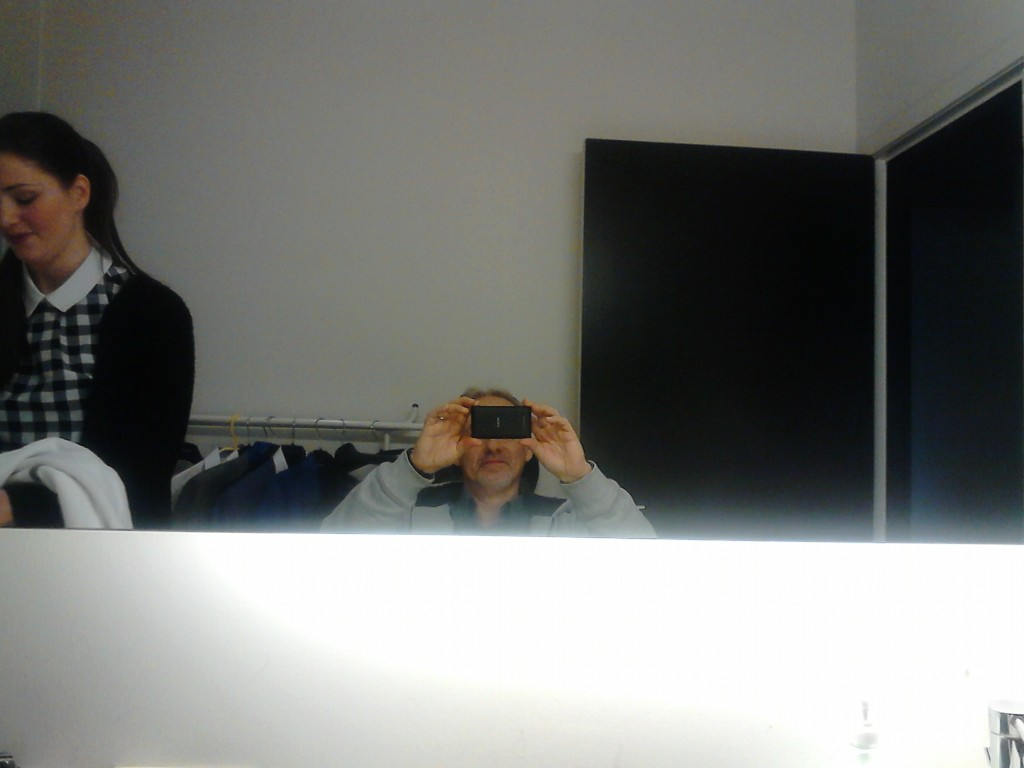 For the very first time in my life I had to allow someone putting make up on my face. She explained to me that they try to make us look more or less the same as that is better. Now we were all white people in the studio but I wonder how they would do with people from Africa… But the make up lady was very friendly and made me feel comfortable and feeling a bit more relaxed.

With myself having no experience with media and live shows apart from having sit in the audience once some 15 years ago I was a bit nervous to be honest.

After the make up bit (even something on my lips for heaven sake….) we went down to the studio itself. 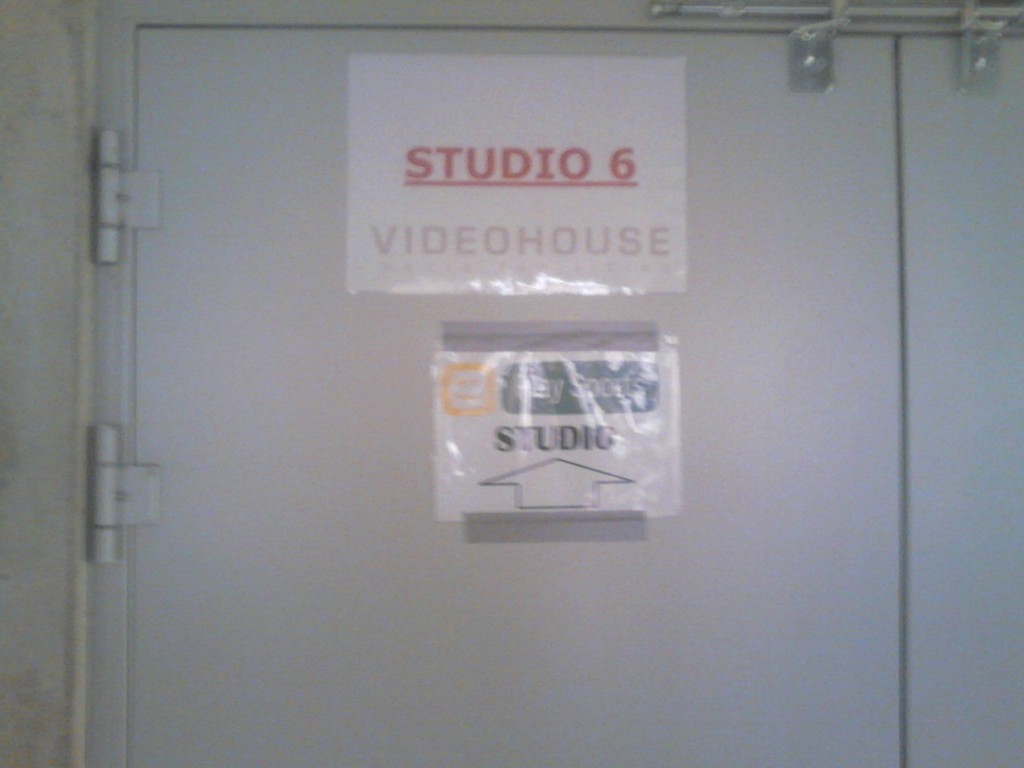 Where the action took place

The studio door…. behind that is where it all would take place. Telenet is the company that brings TV to most houses in Flanders and Play Sports is the sports channel in Flanders. And for each show they have to make some adverts of course. And this is what they came up with for this show. 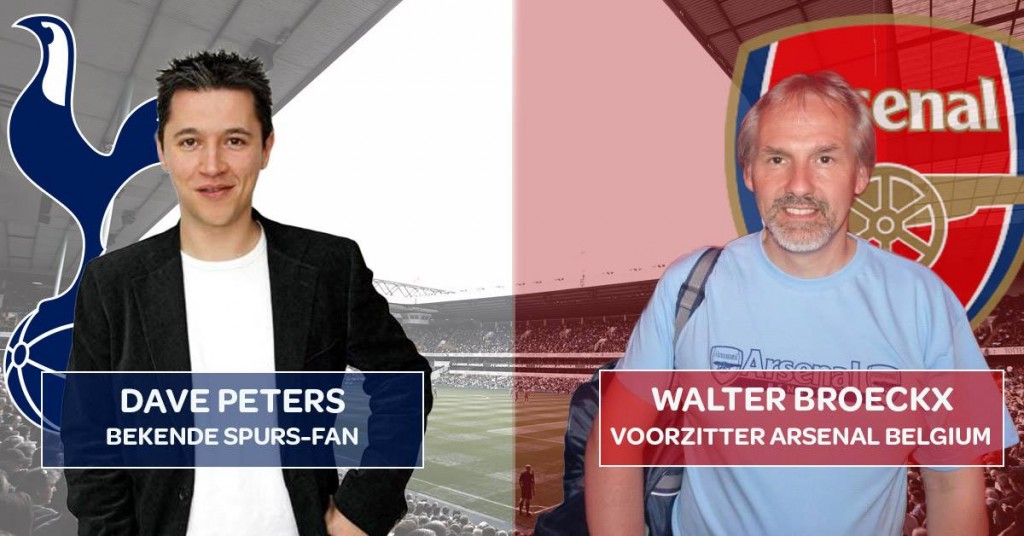 The billboard with which the Sports channel advertised their show on the internet.

Well I didn’t knew they would use my face or which picture they would use.  They asked for a few pictures they could use the days before. But this is also something new for me.  Seeing your face on the advert for a live broadcast on TV…  But let us open the door and enter the studio and this is how it looks half an hour before the show. 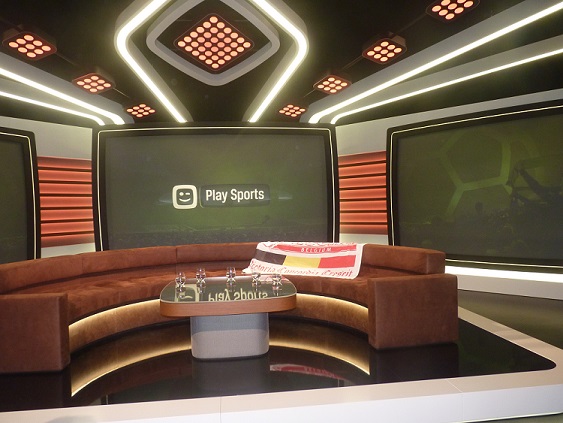 The studio with the seats we would sit in with my place marked with the Arsenal Belgium flag.

They told us were we would sit and I immediately put my flag down and made this picture. For anyone wondering there is just water in the glasses.  Nothing else. Behind the sofa are some big big screens but they are used as a background even though during the match they also show the images of the match on those. Probably for the camera man who stayed in the studio during the match. 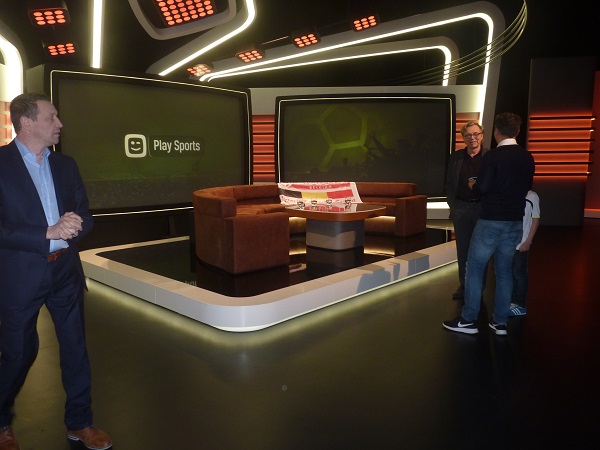 From left to right: Peter Morren, the host, Jan Mulder the famous pundit, Dave the famous spud and his kid already doomed to follow them.

Another view on the sofa taken from in front of the camera that would be my camera. Peter Morren, Barcelona fan who hosted the show on the left. Then in the picture we see Jan Mulder. Loser with Anderlecht in the European cup final in 1970.  An then Dave the frog who blew himself up to unseen proportions and a kid destined to a lot frustration in the rest of his life unless he would change camp. 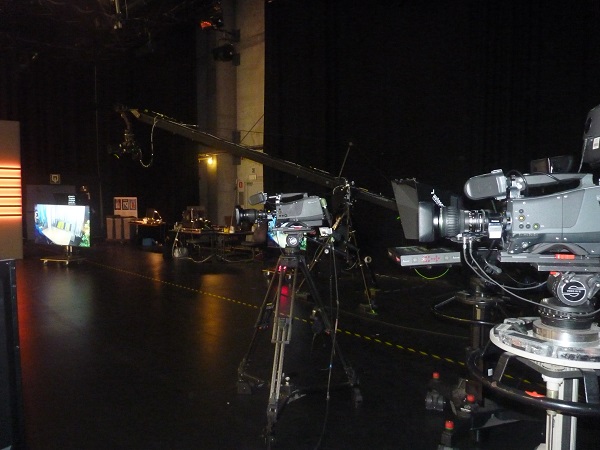 The cameras in place in the studio

This is the site you never get to see as there is nothing nice about it of course. But still for me as a newcomer an impressive sight to see all that equipment lined up. They put a mike on my shirt and even changed batteries at half time.

They then showed us where we would sit during the match itself. So will I.

The glamour has gone. A room behind the big walls where we sat. I didn’t know about it but where we sat but we were filmed the whole time and they showed our reactions after each goal in the show of course. Hidden camera for me as I didn’t know that. But I more or less behaved.

Back to the studio where the count down began. 5 minutes, the make up lady with a last round up and going with her brush past all of us. The woman who operated my camera (sounds pretentious) came over to make sure that the AFC logo on my clothes would be very visible. Thanks for that and it shows how much detail goes into it.

And then the show started…. The host saying a few things and then presenting the guests. And believe it or not….. he managed to say my name wrong. In stead of Walter Broeckx he introduced me as Walter Vandenbroeck. So my first sentence on live TV ever was to correct the host and tell him my real name. To his credit when the match started he came over and apologised as he knows a Walter Vandenbroeck and just had messed up. That is live TV of course.

Then the blah blah started and it is not really my natural habitat. But the host tried to make sure we all got enough time to talk. But Jan Mulder is the real star of the show and he is almost unstoppable when he opens his mouth. The spud fan trying to take a dig at Arsenal because of us moving to North London. I reminded him that they never won the league as a London team with Tottenham being in Middlesex in those days.

But it all remained rather friendly in the end and I really found it funny how he was begging Tottenham up to be one of the best clubs in the world. Well a good attempt but we all know better. Then came the moment Arsenal Belgium members liked most. 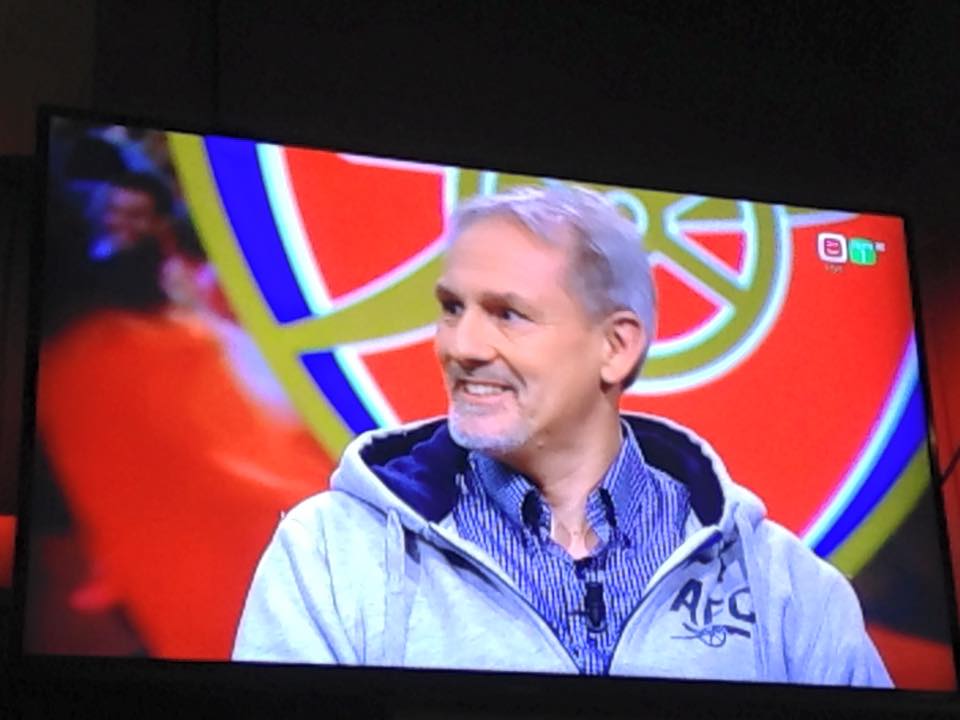 Me saying: you won two titles in your whole history, we won 2 of our 13 titles at White Hart Lane

I had dreamed of saying this the whole week to be honest and must admit felt rather happy with myself, hence my big smile. Then we went back to the lounge where we would see the match. And there the pundits were at work. 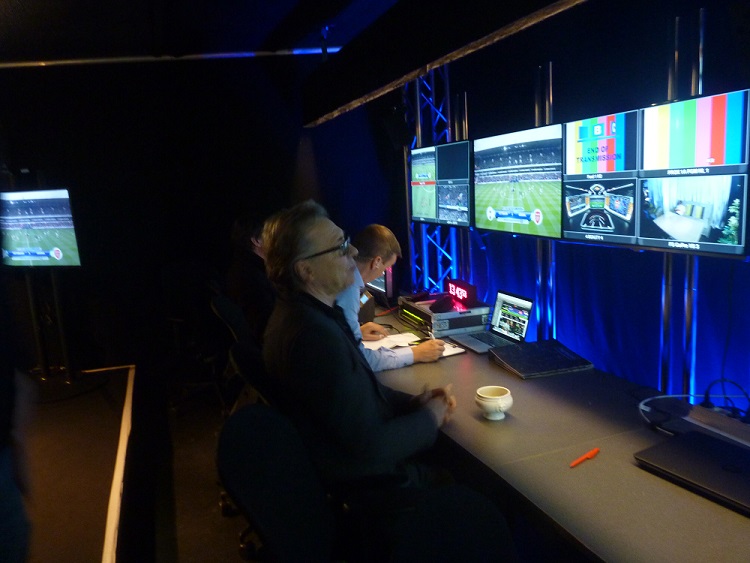 I was watching on the TV on the left of the picture, which had a hidden camera on top of it.  The pundits Jan and Geert worked and asked for replays from all angles on some situations. They were in contact with another room deciding what to show at half time or at the end. And then seconds before the half time show or after the match they had to cut some thing as there wouldn’t be enough time.  Jan Mulder shouting and giving his comments in his own funny way during the whole 90 minutes. Geert was more focussed on the replays.

I hoped to add a picture later on that was shown when I celebrated our equaliser late on but can you believe it that the spud fan who was sitting next to me wanted to give me a high five after they scored one of their goals??????? Can you really believe that???? I completely ignored his hand of course.  If I would have done that I would have resigned as Arsenal Belgium president in front of the cameras and would have stopped writing on Untold. WTF was he thinking????? In Antwerp we have an idiom that goes like this: “Met alle Chinezen, maar niet met den dezen” Translated: With all the people from China, but not with me. To be honest when we equalised I thought about it for a split second to offer him a hand to give a high five but let it go. I was too happy about the goal myself to really give it a go. When the match finished we went back to the sofa for a last chat. 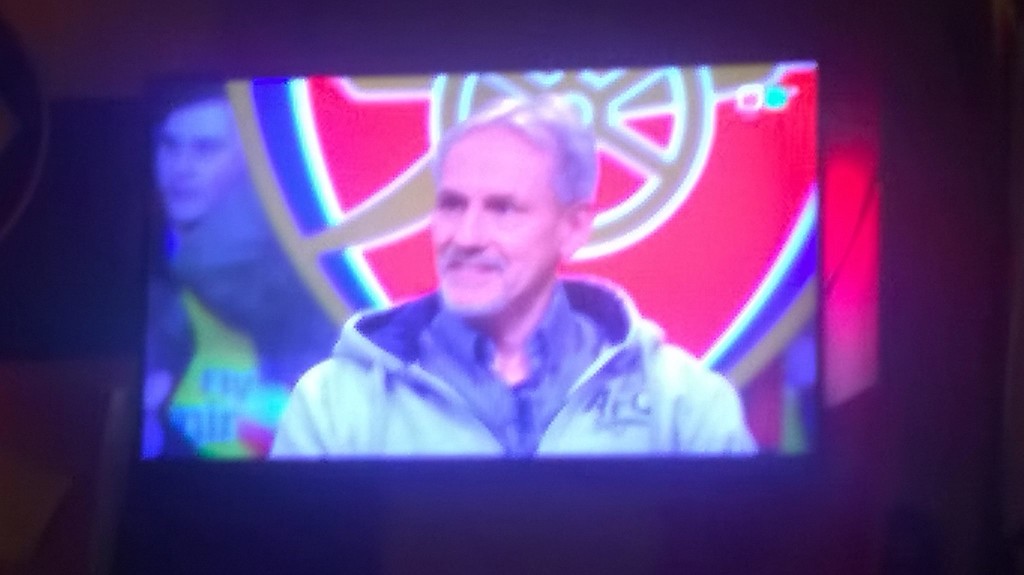 Walter : “Arsenal is the bigger club when you look at both clubs history…”

The presenter asked me about the number of days that Arsenal has ended up in front of Tottenham. I then said in relation to the last 20 years that we have been the biggest club from the two fro no matter what angle you look at it. And then added that this is in fact true for the whole history of both clubs.

At the end it was a very interesting moment of my life. I am not one to jump on the table as I am more a man of the written word then the spoken word. I am a thoughtful speaker more than a shouter. So not really my style but I managed to score my points and that is what those shows are mostly about. Let everyone score from time to time. I scored a few so went home rather satisfied and got overwhelmed by the messages on my phone from friends, family and supporters who congratulated me on how I did in the show.

The people in the show said to me they considered getting me back if Arsenal could win the league on May 15. Let’s hope I am in the studio that day… though if I really could choose I would be in London that day.

From the History Society

17 Replies to “Walter in the studio part 2. Putting the spud in his place, and being the face of Arsenal in Belgium”