As you will know Untold never has been a big fan of the tournaments organised by the crooks of Uefa and Fifa. As I completely dislike these organisations I don’t want to be involved in anything they organise. I will also not attend a party organised by the Napolitan Mafia, so why would I go to the party of Uefa.

I’m not one to just change my thought on players if they put on another shirt unless it should be an Arsenal shirt of course. And don’t get me started about their deep loving feelings for our country as it turns out that almost all the players are hiding their earnings in Luxemburg companies so they avoid paying taxes in Belgium as much as possible.

So don’t expect me to go out and support a bunch of tax avoiding Man City, spuds and Chel$ki players.  And then to think that the law makers in Belgium have made a big difference for sports people like footballers where instead of paying 40-50% taxes as the average Jos Flanders and Marie Walloon have to pay they are given another tax rate. No, they only have to pay a very, very low tax rate.

And still it is too much for the national heroes to support the country they oh so dearly love. Solidarity??? You are having a laugh.

So with that off my chest lets us talk about the European championship and the Arsenal players involved. As today is the start of the matches with only 8 teams involved and with 5 Gunners still at the tournament.

Today will probably not see Szczesny in action. Poland has to play but after Szczesny got injured during the opening match from Poland he first couldn’t play and then was replaced by Fabianski the former Gunner.

Mostly because he got treated so harshly when playing for Arsenal by some fans I do still have a bit of a soft spot for Fabianski. Despite him breaking my heart a few times. Poland will play Portugal. A team that has one of the best players of the world in it but despite his presence they are not capable of performing when it matters.

In fact it is strange to see the resemblance with that other best player in the world Messi. Messi and Argentina however do manage to get in the finals of the big tournaments but then they bottle it. Ronaldo and Portugal can only dream of getting in the final like Argentina does. It still is a bit strange of course that the best players are not capable of winning it.

Portugal again is not really playing convincingly but at least they have beaten Croatia in the previous round. A goal near the end of extra time sealed the match. If you ask me a prediction for this match I do think that Portugal will win it somehow. A reminder: I am terrible at predicting football results.

Tomorrow we will see Aaron Ramsey play Belgium. Belgium one of the tournament’s favourites. So it should be game over for Wales and Ramsey might be on the plane back to London during the weekend. Or to wherever he is planning to spend his holidays. Well that is the general feeling in Belgium. They will trash Wales. They are already looking forward to a semi final with Portugal.

But then again… wasn’t England also looking forward to playing France? We all know how that ended.

It’s dangerous to focus on the next round when you still have to play a round. I must say that what I have seen from Wales hasn’t really impressed me. But they are a difficult team that can defend with great determination and then they have two players of world class in Bale and Ramsey. Bale is a player that can win a match in a split second. And Ramsey is the engine of the Welsh team. If they both are in form and have their day then Wales will have a chance.  But my prediction is that Belgium will win it. But then again I also predicted England to win against Iceland…

On Saturday we have the biggest clash of this round. Germany – Italy. They don’t come any bigger than that. Multiple winners of world cups and European championships and one will go home.

With Özil we have one of our big stars in this competition playing for Germany. Italy has already taken the scalp of Belgium and Spain in their trophy cabinet of this tournament. A team that seems difficult to beat playing a kind of defensive football as only the Italians can. A style that has been copied and imitated with lots of success by some managers. Italy is for that reason not my cup of tea.

Germany on the other hand is the team that will always go out with the intention to make it a real and open match of football. Germany will only lay back if they are forced to. So the Italians will like that German approach very much as it gives them the chance to wait for that one chance and then take it an then close the shop.

The problem with Germany this tournament is that they create plenty of chances but don’t convert enough of them. Muller has completely lost his scoring form of previous world cups. If the Germans can find their finishing boots, they will win it. But be aware of the Italians and their silent killer tactics. My prediction… Italy will win it.

Finally we have the team with most Gunners : France with Koscielny and Giroud. France will play Iceland. Piece of cake. Well it looked that way before the England match of course. Iceland who managed to beat Holland and Turkey in the qualifying group matches before this tournament should have been a warning for every team. But nobody really took notice of them. It wasn’t a one off. It wasn’t a fluke. No they are another difficult to beat team.

And apart from the English fans that are not over the defeat most people in Europe do feel a bit of sympathy for that bunch of people coming from a cold island in the middle of that big ocean. For the players, supporters and for the whole country this is a bit of a fairy tale of course. And everybody feels sympathy (well probably not all in England for the moment) but will they do it again and beat France the hosts? That would be a big surprise but Iceland is the team that is producing surprises so why not? Will they be the Greece or Danmark of former European Championships and win it? My prediction however…. France will win it. Giroud to score a goal and give an assist.

So if my predictions are correct we would have  semi finals between Portugal and Belgium and the other between Italy and France. Meaning all but two Gunners out of the tournament. From an Arsenal point of view… I wouldn’t mind. But for the players involved… I would grant them more matches as it will bring them lots of joy.  For those who will watch it: enjoy yourselves. As for me… I will only watch if the Arsenal players are fit  at the end of the match and tournament. So let us keep our fingers crossed for that result.

The following graphic has appeared in other places, and we don’t know who the copyright owner is.  If they can get in touch, we’ll give them a link, and a big vote of thanks, as it made some of us smile. 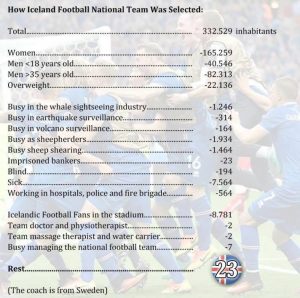 22 Replies to “The Euro’s: final stage for some Gunners? And how the Iceland team was selected.”