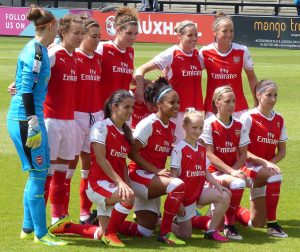 The game started at 14:00 at a dry but very windy Borehamwood.  The wind certainly made playing somewhat difficult being basically across the pitch making the path of the ball extremely erratic at times.

Arsenal had made two changes to the team that beat Reading in the Continental Cup last weekend,  Sari returning in goal replacing Emma Byrne and Kelly Smith replacing Katie McCabe.

Jordan Nobbs soon announced that she was back to her very best when on 10 minutes she played an astounding long pass from halfway inside the Arsenal half behind the County defence, Danielle Van de Donk racing on to the ball to calmly place the ball into the County net.  When the highlights are placed on to the Arsenal Player, you must have a look at it – absolutely fabulous.  Well worth the price of entry on its own.

Kelly Smith picked up a yellow card in the 32nd minute for a professional foul, Rachel Williams for Notts got one for a poor challenge in the 40th minute and Van de Donk and Jade Moore both got one for an incident in the Notts penalty area which saw  referee Sam Purkiss call over the captains for a firm warning over future conduct.  The Arsenal player was judged to have started things and the game restarted with a free kick to Notts when most in the ground (including the Notts players from their reaction) were expecting a penalty.

A rare County attack in the closing stages of the half was thwarted when Alex Scott put in a great challenge to deny Ellen White who looked favourite to test Sari.

Goalmouth action first half in the County goal

And in our end

The second half was pretty much a replay of the first with Arsenal scoring after 10 minutes.  This time Nobbs scoring to finish off a good sequence of Arsenal posession and slick passing.

After that Arsenal seemed to stop forcing the pace and that enabled County to be more competitive.  Sari made a great save to deny County a goal but, for the most part, County efforts were either high, wide or both.  Sections of the crowd gleefully asking how high or wide County wanting the goal to be.

A late effort from Losada nearly added a third Arsenal goal but Walsh tipped the ball over the bar to keep the score at two nil.

Jordan Nobbs was votedArsenal Player of the game by the Supporters Association.  She is certainly coming back to her best following injury and was well worthy of the accolade.

After the game Arsenal Manager Pedro Losa praised Jordan Nobbs.  This is a quote from Arsenal.com

“We’re very happy to have her scoring goals and impacting the game.  She loves to play for Arsenal, loves training every day with us and brings energy to the team.  There’s no question about her level.  She’s young and has lots of potential”

The Notts County manager Rick Passmoor was left to rue missed opportunities – quote from FAWSL.com “The result and the three points go to Arsenal fully justified.  But for ourselves we need to get back out here on Monday and sort things out.  We’re a good team with good players and we simply didn’t perform.  On the day the best team won”

The result lifts Arsenal to third place in the table five points behind Chelsea and six behind Man City.  Chelsea are our next opponents this coming Sunday and nothing less than there points will do.  The game will be live on BT Sport at 15:00 for viewers in the UK.