If you ever spare a moment to read the anniversaries that are posted on the home page of this site most days (occasionally I forget or the technology goes wrong – normally I blame the latter but the former is usually the real reason), you might know what is coming up.

Because 26 October is rather a special day in the history of football, and of Arsenal.  I haven’t seen these events mentioned anywhere else, so I thought I’d do my own celebration.

Without the events of this day, none of us would be doing our football thing.   Because on this day several football clubs met at the Freemasons Tavern, Holborn and formed the Football Association after Ebenezer Morley wrote to Bell’s Life newspaper, suggesting that football should have a set of rules.

The captains, secretaries and other representatives of a dozen London and suburban clubs playing their own versions of football met “for the purpose of forming an Association with the object of establishing a definite code of rules for the regulation of the game”.   The clubs represented were: Barnes, War Office, Crusaders, Forest (Leytonstone), No Names (Kilburn), Crystal Palace, Blackheath, Kensington School, Perceval House (Blackheath), Surbiton, Blackheath Proprietory School and Charterhouse.  One of the 12 dropped out but the rest signed up to develop a set of rules.

Civil Service FC, now of the Southern Amateur League are the only surviving club of the eleven who signed up to be FA members at that first meeting in 1863, when they were listed as the “War Office”.  The Crystal Palace club is not connected with the current club of that name.

Six meetings took place over the next six weeks and then first the FA was formed, and second the rules laid down – although not the rules we know, since catching the ball was allowed.  Blackheath wanted to keep “hacking” (ie kicking the opponent in the style that many clubs still favour and which refs like to ignore) but in the sixth meeting hacking was removed.

The first match under the rules was played between Barnes and Richmond at Limes Field in Barnes on 19 December 1863. It was a 0-0 draw.

So that is our first anniversary today – football itself.  Now the second…

If you ever do look at the list of anniversaries on the front page you will find that (depending on the day) the list runs between half a dozen and 30 events, and 26 October is no exception – but I’m just picking three momentous events today, and the second is 26 October 1914: The Arsenal Football Club Limited was proclaimed for first time on masthead of the programme for the Football League v The Southern League at Highbury.

You’ll know that the club started out as Dial Square (the factory at the Woolwich Arsenal which provided the players for the first match) but only played one game under that name before adopting the Royal Arsenal FC name.   (If you want to know why it was Dial Square – there is an article on this on the Arsenal History Society website).

The club spent most of its first year at Highbury with the name Woolwich Arsenal and indeed the first match programme at Highbury made much of the fact that it was still the same club as before – just with a new location.

However the dropping of “Woolwich” from the title was inevitable sooner or later, and the name was changed sometime between 20 and 23 April 1914.  The difference is shown in the matchday programmes thereafter, starting with the Football League v The Southern League game noted above.  The handbook at the start of the 1914-15 season also shows the new name.

This new name of “The Arsenal” lasted until 1919 – long before Herbert Chapman became associated with the club – although popular mythology often repeats that claim that the change came about because of Chapman (a claim particularly made where writers just copy each other, rather than return to source material.)

So – my first two anniversaries are the start of football itself, and the creation of “The Arsenal” (which we still celebrate today in some of the chants at the Emirates).

Now my third choice from today’s list – the official opening of the stadium itself.

Official openings of locations are rarely on the day when a building is actually opened to the public for the first time – indeed the east and west stands at Highbury had official openings after they had already been used for matches a couple of times.  I am not sure why this is, but maybe it is to make sure nothing is going to fall on the heads of the nobs because a workman has left a spanner out.  If there is a disaster waiting to happen, better let it happen to us regular supporters. 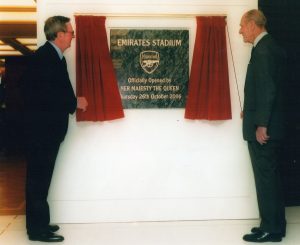 This picture was given to me by John Sowman, author of Arsenal: The Long Sleep (again see the home page for details) and was, I believe, taken by the man who hung the curtains. which the Duke had to pull to reveal the plaque.   So, I believe this is the first publication of this particular shot.

The inscription actually says the plaque was opened by Her Majesty the Queen.   But on the official opening day on 26 October 2006 it was The Duke of Edinburgh who formally opened the Emirates Stadium.  The Queen was due to do the job but was unable to attend because of illness and it was too late to change the plaque, so the team and Arsène Wenger were then invited to Buckingham Palace on 15 February 2007, making Arsenal the first ever football club to be invited to the Palace for tea.

League Cup: Arsenal – Reading 2-0, The Ox with a brace

Arsenal vs The Spectacles. The teams and other stuff.

All the young dudes – but which one is this year’s breakthrough kid?

The gross incompetence of England’s football authorities exposed, once again

Why the TV audience for football is falling, and what it means for the future of football

How are some of this summer’s big value transfers doing thus far? A case study

6 Replies to “Why 26 October is such a special day in the history of football, and of Arsenal (and the Royal Family)”