You might recall a little piece I wrote about the outrageous allegations in the Telegraph about empty seats at matches at the Emirates.  Using faked and misleading photographs the paper tried to make out that vast swathes of the ground were vacant during matches – even though the article admitted the number of unoccupied seats in the ground was around 1000 to 1500 – between 1.5% and 2% of capacity.

Compare and contrast if you will the situation the Tax Payers’ Stadium – the stadium whose unofficial name commemorates the fact that I, and perhaps you, paid for the wretched thing.  For the game between State Aid United and Chelsea 20% of the seats were left empty.  Some on purpose some because everyone knew in advance what was going to happen.

But even that didn’t stop a spot of bother in the stands.

Perhaps the greatest tragedy of the fighting in and around the Tax Payers Stadium last night was the fact that it was all utterly predictable and indeed was predicted.  And it happened because it simply isn’t a football ground.

There are no less than five fundamental problems.

One is the layout of the stadium, which is designed as an athletics stadium, and so doesn’t afford good views, with even the closest to the pitch, a long distance away.  I have been told by several people that everyone wants to stand, and even when they do they often can’t see very well.

The second is that the ground itself was designed for events which would be attended by people coming along for a half day or even full day event – meaning it is made for easy movement around the arena – not what you really want in a Premier League ground where segregation is required.  The consequences are noted below.

The third is that it is built in a park, where it was anticipated that happy families would meander and mingle before and after events, bathed in the glorious glow of the Olympics.  And that’s where pitched and running battles can be had.

The fourth is it is run by the owners of State Aid United who seem to be congenitally incapable of sorting out issues with the local police force over such basics as a suitable radio system for communication inside the ground.  The owners’ view seems to be “we haven’t paid for anything else – why should we pay for your radios?”

The fifth was explained by the Guardian, which wrote, “when the Chelsea supporters in the lower tier of the Sir Trevor Brooking stand made for the exit behind them they had to cross over a concourse and as some West Ham fans surged towards them the stewards fought to keep the rival factions apart. Objects including coins and ripped-up seats were thrown and, with a bottle-neck seeming to have formed… “

It is fact a stadium that is fundamentally flawed from the point of view of football, and mugs like me – people who believe that one should pay one’s taxes – are the ones paying for a) the mess and b) policing the mess.

So the club now has a standard line which is just cut and pasted after each incident.  “West Ham United and London Stadium partners unreservedly condemn the behaviour of individuals involved in incidents during this fixture with ….” (just fill in the name of the opposition).

So as the police now tell us, “Seats inside the Olympic Stadium were ripped out and thrown, bottles were hurled…” and instantly you see the real issue – how the hell were people smuggling bottles into the ground?   Another issue, I suspect in which the owners of the insulting named “London Stadium” will blame someone else.  Because it is never, ever, their fault.

Thus we had riot police on the streets of London once again, as, according to the Telegraph, there was fighting as “rival supporters clashed on the concourse at the back of the lower tier of the Sir Trevor Brooking Stand”

Which simply raises the question – how the hell is a design of a stadium that allows rival supporters to mix in this way, given a safety certificate?   At least the Telegraph seems to agree saying, “there were serious questions to be asked of the level of security inside their new ground, which cracked under the strain of hosting a big match.”

Of course I am not saying we haven’t had problems at the Ems, but the design of the ground with the four controlled entry points onto the walkways around the ground helps enormously.   Yes we have the flares problem, and the problem of Tottenham fans throwing coins at ambulance men and at Theo as he was carried from the pitch, and yes, of course I know about the breaking down of advertising billboards at WHL by Arsenal fans – but WHL is a very old ground trying to cope with modern situations.  The Tax Payers’ Stadium is a new ground that should never have been given away for football usage.

It would be nice if the FA could be relied upon to do something, but they were complicit in the award of the ground to State Aid, so it looks like things will just be allowed to roll on and on.

And there are problems everywhere.  Indeed one of the problems is seemingly that because of previous issues the number of turnstiles available to Chelsea supporters to enter the ground was seriously reduced – a ludicrous approach to take since it just increased tension. 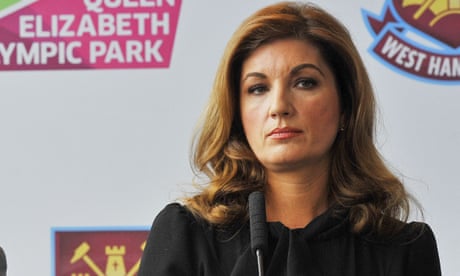 “Be in no doubt, we are part of the most successful stadium migration in history”

One good thing that might come out of this is that people will start to realise that this is not a good place to have football, and that it is a deal that should never have happened.   We know that if State Aid get relegated the tiny amount of rent they pay will be slashed even further, but maybe the lower crowds they might then get could help reduce the problems.

As the Independent pointed out, “the violence soon appeared to spill out beyond the ground itself, with reports suggesting that fights had broken out within the Olympic park itself.   Police officers were subsequently required to escort the visiting Chelsea fans from the ground to the nearby Statford station.”

The trouble is though, that is a very difficult area to contain, and now everyone who wants a fight will know where to go and how to avoid the escorts.  It’s not like the old days in the narrow lanes around the Boleyn ground where the environment controlled where you could and could not be.  Kettling was employed on occasion, and the best bet after a match was to sit tight in the ground and wait.

Of course there is another longer term problem – and that was the decision by Margaret Thatcher – a British politician of ill-repute from days gone by – to remove any notion of society from the lexicon.   Yet society does exist – we see it everywhere from religious groups to family units from groups of supporters to gangs of marauding bankers destroying our country’s economy.   Only when a politician of some renown finally gets up and says “actually there is such a thing as society, and as politicians we are responsible for a lot of it” will we really start to get things resolved.
.
In the meanwhile, let’s once again remember the claim.   “Be in no doubt, we are part of the most successful stadium migration in history.”

Alisher Usmanov makes his move – and it is not the one predicted.

Why 26 October is such a special day in the history of football, and of Arsenal (and the Royal Family)

League Cup: Arsenal – Reading 2-0, The Ox with a brace

Arsenal vs The Spectacles. The teams and other stuff.

All the young dudes – but which one is this year’s breakthrough kid?

The gross incompetence of England’s football authorities exposed, once again

Why the TV audience for football is falling, and what it means for the future of football

How are some of this summer’s big value transfers doing thus far? A case study

16 Replies to “Empty seats at the Ems? You should try the Tax Payers’ Stadium!”