Jürgen: Hans, Hans, have you heard, I have a new job – a really important football job in England!

Hans: Wonderful Jürgen, which TV station are you working for?

Jürgen: Don’t be silly!  I’ve got a job as a manager.  Manager of Liverpool! no less.

Hans: Sorry I thought you said you had an important job.

Jürgen: Of course it is important.   They are a big team.  So big that every time people say their name they put an exclamation mark after it.

Hans: Quite true Jürgen but that is for the concept of the team, not for the manager.   Liverpool! is seen as a British institution, one that can never be criticised and never harmed and never touched.

Jürgen: You mean like the British “bobby” on the beat.

Hans: British policemen are not called “bobbies” any more Jürgen, you really must try and get up to date.  Here’s how it goes.   In 1985, 39 people died in crowd trouble caused by Liverpool! fans, and the primary blame was put on the state of the ground.  No one blamed Uefa who selected a ground that was totally unfit for purpose and no one blamed the ! fans.  In April 1989, 96 people died at a match involving Liverpool.   There was quite rightly no blame attached to any Liverpool fans (apart from by the Sun newspaper, which always gets everything wrong, as part of their remit) and ultimately the police were blamed for a cover up.  The FA, who organised the match and approved the stadium were never blamed, and the Sun remains the most purchased daily newspaper in Britain.

Jürgen: This makes no sense at all.

Hans: Now you are getting it.  None of this makes any sense at all.  You are going to get slaughtered.

Jürgen: No, I am the cheerful chappie, I speak good English, I am intelligent, I have a diploma in walking from Goethe University of Frankfurt.

Hans: This is where you have got it all wrong my friend.  People with any qualifications are laughed at by the English media.  They hate intellectuals.  Look at how they hate Wenger.

Jürgen: But a diploma in walking is not intellectual.

Hans: It is to the English.

Jürgen: So why will they hate me?  Because I am German?  Are they still fighting the war?

Hans: No, no, no.  For the war they laugh at themselves – go and watch Dad’s Army.  In fact every time they mention the war they run one of these silly pictures from the show.  It is the “Three A’s”. 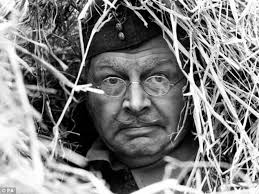 Jürgen: I thought the aaa was the Anti-Arsenal-Arsenal – the people who claim to be Arsenal fans but go on moaning all the time because they have the longest run in the top four of any team in England and did the only unbeaten season since the first and…

Hans: I wouldn’t say any of that when you are a manager in England, Jürgen.  There are two aaa’s.  The one you said, and the attributes of their football journalists and blogetta writers:   Arrogance, amnesia and assumptions.

Hans: OK but only if you stop using exclamation marks!  See?  You’ve got me at it.   British journalism, and the little blogs that run the 200 word articles (sometimes called the bloggettas) is written by people who know everything.  They can look at any situation for five seconds and sum it up and see it all and tell the future.  So they are arrogant.  But they generally get it 10000% wrong so they they immediately forget what they wrote before and now write the opposite – that is their amnesia.  And they make assumptions – like the fact that their readers are so dumb that they won’t remember what the stupid journalists wrote before.

Hans: Yes Jürgen I know how it goes.   But very shortly they will be running stories like “Liverpool are unbalanced and inconsistent” and “What Jurgen Klopp needs for this failing Liverpool team” and “Liverpool’s performance limp against Leicester” and “Five players Klopp must get rid of this summer” and…

Hans: That’s nothing.  You will then have “Klopp turns on Anfield crowd” and “Jamie Carragher highlights the mistake Jurgen Klopp is currently making…” and…

Jürgen: Carragher?  Isn’t he the Liverpool! player who threw a coin at the crowd at Arsenal, and was never banned for it, while the man who threw the coin at Carragher got a lifetime ban?”

Jürgen: But wait a minute, supposing I can beat Arsenal in my first match at the Emirates and score lots of goals.  Won’t they love me then?

Hans: By the time the reverse match comes around in March the press will print a story such as “Can Liverpool and Arsenal provide another moment of fleeting greatness?”

Jürgen: Fleeting greatness?  In my very first season.  What do they expect?

Hans: As I said, this is Liverpool!  With an exclamation mark each time you say it.  Reality has nothing to do with anything.   I can tell you what will be happening.  The fans will be refusing to buy any newspaper which covers Scottish football…

Hans: Because Liverpool’s previous manager has a record of played 27, won 26, drawn 1 in his new job, and you won’t be matching that.  But try not to interrupt Jürgen, its very British, and not very nice.  By the time you get to the Arsenal match, all those headlines from before will be turned into rather nasty threats, and the Liverpool! fans will be calling radio stations demanding your departure.

Hans: “Liverpool supporters were fairly clear about what they wished for, as they are about most things. They wanted a top-drawer manager with a record of success and a definable style. Not overly impressed by the contributions of Hodgson and then Brendan Rodgers, and quite possibly spooked by how close they came to appointing Roberto Martínez, they felt a club of such stature should go for one of the big names if it wanted to restore former glories.

“Klopp definitely counted as one of those and early results were encouraging, yet after a dismal January was followed by such a limp performance against Leicester some fairly basic questions are being asked, such as why Klopp could not see that Mamadou Sakho would be a better fit at centre-half than Lucas Leiva. That boat has sailed now, of course; Sakho is playing for Crystal Palace, though only because Klopp set his face against a defender who had become popular at Anfield and happens to possess the traditional physical qualities of a centre-half.”

Hans:  Here’s a few.  To make it easier I shall say them as bullet points…

Jürgen: Thank you.  Can I stop this?

Hans: Yes.  Just beat Arsenal.  You might think people have turned on you at Liverpool! but that is nothing to the way they attack Mr Wenger.

Jürgen: So how do I beat Arsenal?

Hans: You haven’t met the guys at the PGMO yet have you?

The latest from the Arsenal History Society

We are currently 90% of the way through the most detailed review of Arsenal in the 1930s (the era that made Arsenal into one of the greatest teams) ever written.   The latest articles are

The Arsenal History Society publishes numerous series of articles exploring different aspects of Arsenal’s history.   You can find an index to all the series to date on the Society’s web site

20 Replies to “Arrogance, amnesia and assumptions: how the football media deals with Liverpool”