A stunning Arsenal weekend for the Women, U23s and U18s

For our Women, U23s and U18s it has been an excellent weekend – unlike our Men’s first team.

Women’s FA Cup semi final – Everton v Arsenal Sunday 15 April.  This match was played at the Marine Travel Stadium, home to non-league Marine FC.  The ground is in Crosby, Liverpool and, for once, was exactly where the sat-nav said it was.  A grass pitch, in decent condition but less level than we are used to now that Borehamwood has been upgraded to Desso.

A stand at one end full of the home supporters and a covered side on the opposite side to the dug-outs with a mixture of Everton and Arsenal supporters.

Television cameras were present as the match was being shown by the BBC on the Red Button.  In total there were 1,457 spectators present (mostly for Everton).

The Arsenal Team was:- 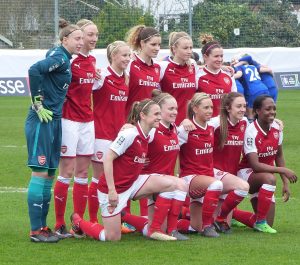 On the bench, pictured with our medical and coaching staff were :-

The match started with both teams testing out the other, neither creating any clear cut chances, both defences being able to nullify the other’s attack but with the majority of the play in the Everton half.

In Min 25 Arsenal at last put together a real skilful attack down the right hand side, Dominique Janssen played the ball out of defence to Lisa Evans who passed to Heather O’Reilly on the wing.  She beat her marker got to the byeline and put in a great low cross into the Everton area where Danielle Carter was presented with an easy opportunity to slot the ball home from the edge of the six yard area.  One nil to the Arsenal and on balance no more than we deserved.

We dominated the remainder of the first half but good defending from Everton meant that we were unable to create more than half chances and the half ended with just the solitary goal.

The second half started with both teams showing attacking intentions, We needed an excellent tackle by Quinn to deny Chloe Kelly a clear run at our goal.  In the 67th Minute the referee Abigail Marriott decided that a tackle by Dominique Janssen was both a foul and inside the penalty area and awarded Everton a penalty.  I was at the opposite end of the ground at pitch level but it looked to me that any challenge was made outside the area.    Video replays are inconclusive, it was a foul and was on or very close to the 18 yard markings.  1,400 Everton supporters in the stand at that end of the ground disagreed with me and ex Gunner Chloe Kelly made no mistake from the spot sending Sari the wrong way.

Despite intense pressure from Arsenal the game looked destined to go into extra time until we were awarded a corner on the left hand side in the second minute of time added on.  Jordan Nobbs put in a beautiful inswinger which was met by a thumping header by Louise Quinn giving the Everton keeper no chance.

No way back from there for Everton.  A tight match but the right result on the balance of play.

Brief highlights are available on Arsenal.com

We now go to Wembley on 5th May where we will play Chelsea who beat Manchester City by two goals to nil in the other semi-final.

The next Ladies Matches are Wednesday Evening 19:30 at Meadow park against Reading and Saturday away at Yeovil.  We need wins in both matches to keep up pressure on both Chelsea and Man City who are currently first and second in the league and occupying the two European places for next year.

Our U23s went to the top of their League with a 1- 0 win at the Emirates on Friday evening against Swansea.  Charlie Gilmour scored the only goal two minutes into the second half. Post-Match Report U-23s: Arsenal 1-0 Swansea: How it happened

This result put pressure on Leicester who very surprisingly lost their game against Sunderland on Sunday by 4 – 1.

With one game to go for all teams, we have 39 points, Liverpool are second with 37 and Leicester are third with 34.

Our final game is on Friday Evening at the London Stadium when we take on West Ham.  Win that game and we win the league no matter what happens elsewhere.

On Monday evening our U18s played the second leg of their FA Youth Cup semi-final against Blackpool.  The tie was even at two all following the away leg but this was at the Emirates and our youngsters made absolutely no mistake with a thumping 5 – 0 win.

We started well and it was a surprise that we failed to score in the first 15 minutes bur three in five minutes gave Blackpool no chance.  Falorin Balogun got the first in Min 18 with a header, quickly followed by Danny Ballard with another header, this time from an Amaechi corner. Robbie Burton got a third from 25 yards in Min 23.

The goal of the match then came in Min 33; Emile Smith Rowe got the ball half way in our half and set off on a run passing five Blackpool players before being brought down in the penalty area.  He got up, dusted himself down and finished the move from the penalty spot.

Whilst the second half didn’t quite live up to the heights of the first there was still drama, Amaechi had a shot well saved by Thordson in the Blackpoool goal and the Blackpool midfielder Jack Newton twice had to resort to pulling our attackers to the ground on both occasions getting deserved yellow cards.

Matthew Smith, on as a substitute, completed the scoring in stoppage time after a shot by Bukayo Sako was only parried by Thordson.

A two legged final against League winners Chelsea now awaits,  The first leg is at Stamford Bridge on April 27th followed by the second leg at the Emirates on April 30th.

If only our Men’s first team was doing as well!

From the Arsenal History Society