As the chairman of Arsenal Belgium supporters club I had the honour of visiting the Arsenal training ground at London Colney. Our liaison person at the club had organised this trip in order to give the official supporters clubs a bit of a bonus for all their hard work. I cannot thank Mark Brindle enough for this and I think I can speak for all of us who were lucky enough to attend. I was very lucky as I was the last person on his list. Well that is what he told me. 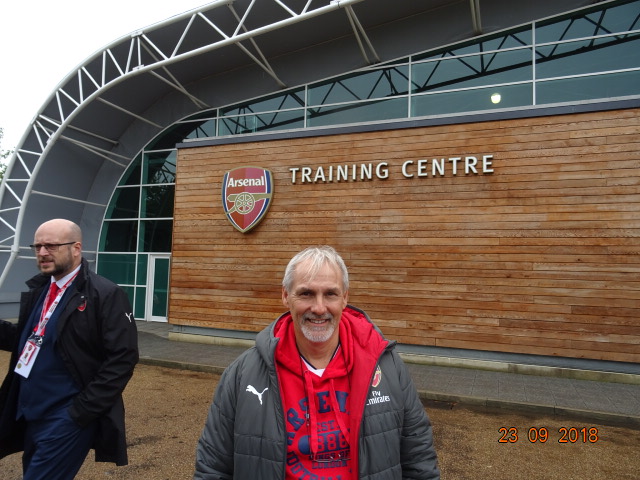 Visiting London Colney is something that only a few people can do apart from players (both first team players as the U18 and U23 players), staff and reporters.   And then it only happens if one is invited.

It is also a place where many old players come to have a look around and see the people they worked with when they played for our club. And there are a lot of them who come to visit the training ground to meet up with their old friends.

I use the word “friends” as our guide Sean told us on more than one occasion: Arsenal tried and tries to create an environment where all the people who work there feel as one big family or group of friends. 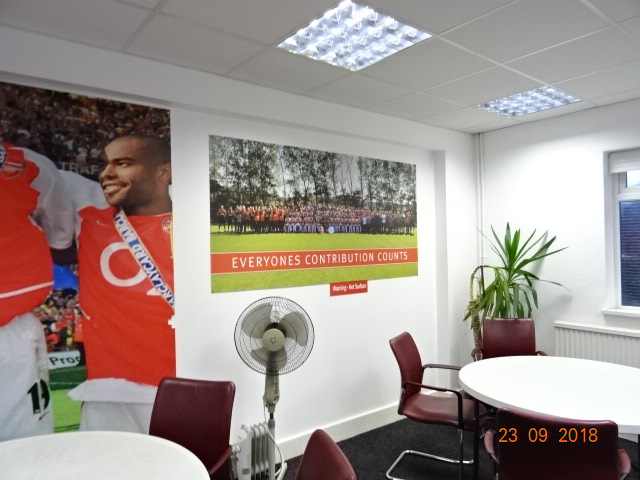 The slogan on the picture expresses the Arsenals’ spirit completely

The first thing that caught my eye when driving up the small road to the training ground was the fact that the whole area looked as secured as the national bank. Camera’s, security you surely will not enter London Colney without permission.

Now London Colney has one person to thank for all that it is. Of course there are many people who put their mark on Arsenal but one person in particular put his stamp on our club and more specific on London Colney. A person who needs no real further introduction as we at Untold have always seen and admired his greatness for Arsenal, yes I talk about the one and only Arsène Wenger.

When Wenger came to the club Arsenal already had their training ground at London Colney. And much to his surprise and astonishment people told him that he couldn’t train on Wednesday as on that day Arsenal allowed the school kids to train on the pitches.

I can imagine Wenger saying : “What do you mean we can’t train on Wednesday? We have to change this.” And when Wenger wanted change, he got change. The ground around the training facilities we had in those days were all corn fields. And the club had a great negotiator when it came to obtaining land. I want to give credit where it is due but I am not sure if it was Danny Fiszmann and/or Ken Friar who managed to buy the total of 144 acres that Arsenal now has, and that they bought at an amazing good price.

Wenger wanted to build a training ground that had both his vision in it and also the standards of The Arsenal in it. London Colney was build in different phases. Somehow people forget and talk about stubborn Wenger who refused change. While in fact Wenger was the most in favour of change. Certainly when it came to the training ground and medical facilities.

He wanted to create an environment that made the players feel that they were entering their home and not their training ground. So when the players leave their big cars on the car park and enter the building they do as they would probably do when they come home: they take off their shoes.

This was installed by Wenger from the first day and Unai Emery has kept this tradition. Our new manager has completely understood the legacy of Wenger and all the changes he has in mind will be done with respect for our former manager. And he seemingly liked the idea of entering a home and so the players still change their footwear when they come in for training.

Of course this is only a small gesture but it shows the deep thought that Wenger made about our training ground and every detail is thought about it.

We as visitors were asked to put on some plastic “overshoes” for most of the tour in order to not make the floor dirty with our shoes. We didn’t have to take our shoes off as visitors.

We saw the place where people can eat a bit. All food is healthy of course and that is no real surprise as it was Wenger who brought in diet and healthy food to Arsenal and to English football.

The big first team changing room is a big spacious room where the players all can see each other wherever they sit. The order is by the number of the players. And that is the place they sit in to change or to listen to the manager when he speaks to them. Only two players were allowed to sit on another place. One of them was Pires was he used to go and sit next to Henry and it was called the French corner in those days. Another exception was Alexis who when he changed numbers from 17 to 7 asked to be seated in his old place and was allowed to do so.

The meaning of this big room was to create a bond between the players. Of course this didn’t always work in the past but the idea to make it possible to create such an environment was important and maybe it helped to create the invincible team. But team bonding is of course largely down to the players and their motivation to create it themselves and to make it happen. Our new manager is also a very strong believer in the importance of team building and making a group of all the players. According to Sean it looks that it is working for the moment.

The players change in the changing room and then go to the next room where they put on their boots before they go out to the training pitches. There are eleven pitches and two are heated so even in winter they can train in perfect conditions.

Our guide had three pair of shoes on display. I had the privilege to had the boots of Ramsey (pink ones), Lacazette and Aubameyang in my hands. The first thing that struck me is that they weigh nothing. They are feather light. Players take around two pair of boots to the Emirates for a home match and four for an away match. The difference being of course that they know how the grass will be at the Emirates but they don’t know really how the conditions will be away from home. 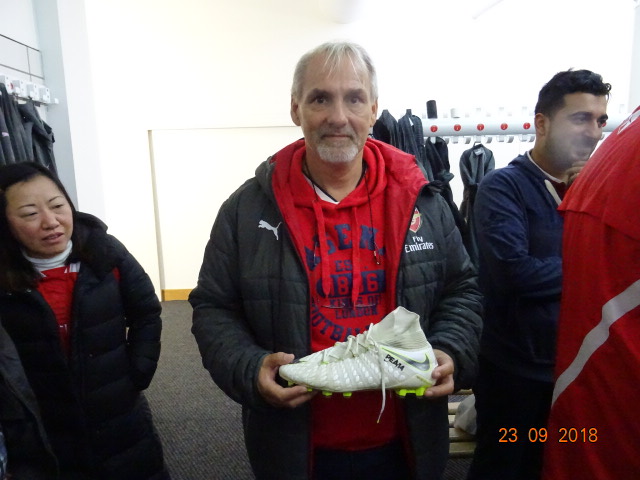 Walter with the training boots of Piere Emmerick Aubameyang

Training boots are used for around 3 months and match boots are usually thrown away after 2 months. And all players have multiple shoes for their private use of course. Most have their names on them. Specially made for their specific feet. So they are not the cheapest pair of boots…. 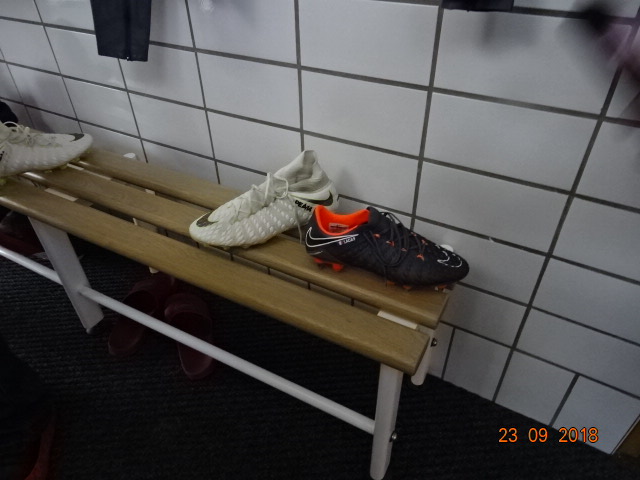 Which of those two will be our golden boot winner come May? Lacazette or Aubameyang?