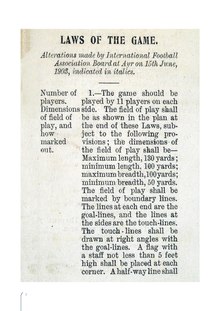 There is a chance that you might have heard of IFAB (the international football association board) of late – having never heard of them before.  A highly secretive body that changes the laws of football when it wants to…

As such they are the people who have changed the handball rule, in a way that is getting a lot of journalists and TV commentators excited.

But if you haven’t heard of IFAB, that phrase “highly secretive” might make you think, “what, another one?”  Because football seems to be run by highly secretive bodies, answerable to no one.  And that seems to be the way that football, and football journalists like it.

And if you’ve been reading Untold off and on for a while you’ll know that is what Untold doesn’t like.  We rather like openess.

So why is football, at its heart, utterly secret?  Does it have to be?  Is there something within the very nature of the world’s most popular sport that demands secrecy?  And again if so, why is the media not interested in this secrecy.  Well, as they say in the press, “we decided to find out”.

To start with IFAB, this is the International Football Association Board, and it determines the laws of the game.  It’s in the news because it has just changed the handball rule, and journalists don’t like it.

IFAB was founded in 1886 with the laudable aim of ensuring that wherever football was played (which meant England, Scotland, Wales, and Ireland), the laws of the game would be the same.  When it started the Irish FA represented all of Ireland.  Since a certain local difficulty in 1921, it’s just N Ireland.  (Ireland – the country occupying most of the island of Ireland did apply for a place in the club in 1924, but got shown the door).

Fifa however was later invited to join as a unified body, but didn’t take over the laws of the game, in recognition of the fact that the British invented the thing.  Fifa has four votes, and the four founding countries have a vote each.  Six votes are needed to change a law.  IFAB is accountable to no one; no one can appeal, no one can challenge.  Which might sound familiar.

And it is a wonderful thing for journalists who are (as we know) absolutely forbidden by their editors from mentioning anything amiss with Fifa (as at the moment when it is being torn apart in the Swiss courts).  So when there is a rule change that journalists don’t like, they can camp out at a swanky hotel, and then blame IFAB.

The megalomaniac unaccountability of IFAB is however a wonderful cover for that other little group of secretive power-crazy automatons and their lackeys: PGMO, the ultra-secretive referees’ association that controls which referee gets which match, and what crazy bit of self-righteous justification is handed to the compliant press to justify the 98% accuracy of referees.  Sorry, that was 83% before VAR.  Sorry that was 69% as revealed by the home bias research of late.

Professional Game Match Officials Ltd is the body that employs Premier League referees in England, and like IFAB it is completely and utterly secretive, answerable to nobody. Hence it plays with its accuracy figures which the media never questions.

Also answerable to no one is Fifa, who would like to be ultra-secretive too, but whose blunders are so great that it just can’t stop having all its dirty washing splashed around the sports pages of European papers.  Although curiously not English papers.

In fact English journalists and their bosses will go to any lengths not to report the current total crisis in Fifa being played out in the Swiss courts.  Nor will they ever criticise the ultra-secretive way in which PGMO operates.   And so that leaves IFAB – who seemingly they have the all clear to criticise.

And thus the Guardian today announces

“Ifab’s, lack of accountability over law changes plays into this narrative of referees as power-hungry despots – desperate to exert control over whatever finite space they are given, be it a pitch on Donkey Lane or the rulebook of the entire game. And anything that makes fans and players think that officials are megalomaniacs is counter productive at all levels.”

And one might think, hang on a moment.  If any organisation is making referees look like power-hungry despots it is the fanatically secretive PGMO which employs referees.  Or maybe Fifa.  Or both.

So we ask, what would make Mark Rushden write such nonsense in the Guardian?  After all he knows a thing or two about football doesn’t he?   For he is the man who presents Soccer AM on Sky Sports and the Warm Up on TalkSport.  Surely he knows about Fifa vs the Swiss legal system court case which is more than likely to spell the end of Infantino and a number of others.   Surely he knows that PGMO is just as secretive as IFAB and that PGMO fiddles its accuracy figures as more and more data comes out.

Seemingly not.  And yet it is not hard to find out.   In the modern world (which it seems these journalists don’t inhabit) most of us start our search for information by looking at the official website of the body we are investigating.   This is the IFAB website

That’s it.  The whole thing.

As for PGMO, here is the sum total of their website…

Fifa.com does cover Fifa, except it somehow just forgets to mention that legal case in Switzerland.  Odd that.  Three all-powerful bodies in football.  One (PGMO) has no website.  One (IFAB) has one that is meaningless.  And One (Fifa) has a website that doesn’t even mention that Infantino and the head of the Swiss judicial system are currently on trial for corruption.

2 Replies to “IFAB vs PGMO vs Fifa… who is the most secret (and damaging) of them all?”