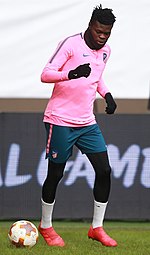 On the other hand we might also note that Bukayo Saka could become the first teenager to score or set up a goal in four straight Premier League games since Cesc Fabregas of Arsenal in April 2007.  Exciting thoughts, especially after the mountain of negativity the club has been barraged with in recent days.

Even the Guardian is upbeat for this game noting that Partey and Gabriel will both be available for the match and what a difference they ought to make.  Thankfully there is not a single mention of Partey and Gabriel returning to a “bloated squad”.   That, I suspect, is left for other newspapers.

On the other hand the correspondents of the media are showing infinitely more delight in the fact that if Palace do score that will be the 12th consecutive home match in the Premier League in which we have conceded.  I won’t go all the way back to last season, but here’s our contribution this season.

An interesting point about Palace that the BBC do come up with is the fact that they “have only kept three clean sheets in 26 Premier League games since football resumed after the coronavirus suspension.”

But of course, we all know who their main threat will be: Wilfried Zaha who we were a dead cert to sign apparently in each of the last three windows and yet didn’t, which was seemingly Arsenal’s fault (no questioning anywhere of whether the journalists just made the whole thing up).

Still, we won’t be able to buy him now because there will be no room in our bloated squad.  (See Surely it is the journalists who are bloated not the Arsenal squad)  Zaha we are told has been involved in almost half of Palace’s 22 league goals this season, scoring eight and providing two assists.

And finally, for now, the result of the results.   A win for Arsenal by one goal will have us staying where we are.  But a win by two and a defeat of West Ham will have us move up to 10th.  A defeat for Arsenal would see us slip down to 12th or 13th.  A win for Palace could see them move up one or two places.

On the other hand if Gabriel and Partey play and do well, and if some of the youngsters shine once more, it will hardly be noticed because it will be an “expected victory” and we will be told yet again that we are going to buy three or four players, but will have to sell lots.  Because our squad is bloated (“Arsenal line up summer move for Shakhtar Donetsk’s Manor Solomon” is the latest idea – that is also from the Guardian).

Next: the line up.