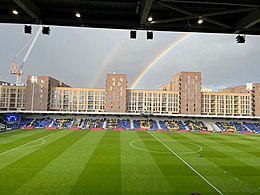 OK, let’s get the technical bit sorted.  We are playing AFC Wimbledon, which is the reincarnation of Wimbledon FC who played at Plough Lane (into which I think Wimbledon have just moved or have partially moved are about to move), not the old Wimbledon who upped sticks and moved to Milton Keynes and now are called MK Dons.

So this club was formed in 2002 in protest at the FA allowing Wimbledon FC to move.  They joined the Combined Counties League Premier Division, a part of the ninth level of English football which feeds into the Isthmian League and Southern Leagues.  It is said that in their opening season they got bigger crowds than the other Wimbledon who were playing in the Football League.  They then went on the longest unbeaten run of any club ever in the semi-professional or professional game in the UK.

Not surprisingly perhaps, given that fact they started to get promotions, and became the first club formed this century to enter the Football League, reaching League One in 2016, on the 14th anniversary (to the day) of the club’s formation.

But League One is, for the moment, their level as they have finished between 15th and 20th each season in that league – although this season is a great improvement.

What this means is that AFC Wimbledon and Milton Keynes Dons are now in the same division, and both doing quite well:

Their full set of results this season thus far reads

Of particular interest in terms of the League Cup is the fact that in 2019 AFC Wimbledon were drawn against MK Dons, losing 2-4 in extra time.   This was the second time the two were drawn together – it also happened in 2014.   In 2018 they lost 3-1 at home to West Ham in the League Cup.  So early defeats are not unknown to them in this competition.

But of course this is a big day out for the club – and Arsenal have been known to be generous in their support of smaller clubs whom they meet in cup competitions, although I’ve not heard of anything particular this time.

However we have traditionally kept the price down and that appears to be the same this season.  The League Cup is not part of the Season Ticket series of games, but the price is once more £20 for adults, £10 for concessions upstairs and £10 / £5 downstairs.

It appears that AFC Wimbledon have been given the lower clock end as is traditional for such matches, and they will take home half of the gate money which could mean they take away a quarter of a million pounds – which could be quite useful to them I imagine.

So it’s our first game against Wimbledon since their days in the top division – and the results were not as one sided as one might imagine from this point in history.  In fact we won 13 of the 28 games between the two clubs, drawing eight and losing seven.

The last five results were

In that very last game, on All Fools Day, Kanu got two and Henry got a penalty in the 89th minute, after Andreas Lund gave Wimbledon the lead in the 12th minute.  The venue for that game is noted as Selhurst Park where Wimbledon had relocated to in 1990 in a groundshare with Crystal Palace as they tried to find a new home instead of Plough Lane.

But 12 years to the day after wonderfully beating Liverpool in the FA Cup they were relegated.  A year after that final game against Arsenal they announced they were moving to Milton Keynes, and then the split began.

And now they are back in Plough Lane, to which they returned on 3 November 2020.

(Note: if I have got any of the history of Wimbledon wrong, please do write in with corrections, politely if possible.  I found several contradictory statements while researching this and realise I may not have everything right.)