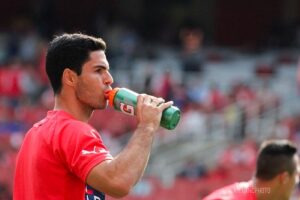 In all honesty, this isn’t going to come as a shock. Goals win games and there are some obvious statistics that underline why Arsenal fell just short of their ultimate aim.

Gunners fans may have taken fifth place at the start of the season but the results in the run-in would have been devastating. When the time comes to move on, it should be clear as to what area of the pitch the manager needs to address.

Let’s start with individual strikers: The two men who shared the Golden Boot trophy at the end of the season both finished with 23 league goals. Behind them, the likes of Ivan Toney, Wilfried Zaha, Jarrod Bowen and James Maddinson all finished with better returns that Arsenal’s highest ranked player.

Bukayo Saka slots in with 11 league goals – a tally that puts him in joint 14th place with Ollie Watkins, Teemu Pukki and others. That’s not meant to reflect badly on Saka as it’s not his main job to score goals,

We must also remember the circumstances surrounding the departure of Pierre Emerick-Aubameyang. There are excuses but it seems fairly clear that a top level striker needs to be brought in this summer.

That theory is backed up, to a lesser extent, by the overall scoring stats. Arsenal scored 61 times in the league and, while that’s a weaker total than the four teams above them, only Leicester City in eighth could boast a better tally of the sides below.

Players contributed from all areas of the pitch, but a striker should surely be a priority.

Having missed out on Champions League football on the final day of last season, Arsenal’s target will be to go one better next time. They have some support in neutral quarters with some bookmakers making the Gunners joint fourth favourites for a top four finish.

The markets have just been released and the best football betting sites affiliated with Sbo.net offer encouragement for Mikel Arteta and his men. Once the new campaign begins, those odds will switch to live sportsbooks and pricing will be subject to change.

Any updates will be monitored by Sbo.net and the latest figures will be free to view on their website. Other types of content will include breaking news and blog posts while each bookmaker has a comprehensive review attached.

If readers want to get involved, each of the sportsbooks mentioned here is happy to take on new customers subject to registration and eligibility requirements. On completion of a quick and secure sign up form, many of those bookmakers have a generous welcome promotion on the table.

There is a wide range of deposit and withdrawal options so adding the necessary funds is easy. Once on board as a regular customer, mobile betting, a choice of other markets and betting via a mobile device are among the other benefits.

It’s the site to follow from a football betting perspective but who are the strikers who can push Arsenal towards that coveted top four finish?

Names in the Frame

Many Gunners fans were happy with the contribution from Eddie Nketiah after he was given an extended run in the first team. However, his final return of five goals in 21 league games suggests that he’s not quite ready to be Arsenal’s first choice for the next campaign.

Now that Alexandre Lacazette bids farewell to the supporters, Arteta simply has to find a replacement. Victor Osimhen is a name that keeps appearing. The Nigerian international started the season in blistering form for Napoli and is a hot prospect for the future at age of 23.

Osimhen is expected to be available this summer but Arsenal are set to face competition from Bayern Munich and Newcastle United.

Closer to home, Everton’s Dominic Calvert-Lewin and Aston Villa’s Ollie Watkins have also been mentioned in connection with a possible switch to the Emirates. Both have that crucial Premier League experience and may be ready to test themselves at a bigger club.

There is some way to go before the transfer window closes but the stats underline the clear need for striking reinforcements at Arsenal ahead of the new campaign.