Billy The Dog McGraw previews Arsenal at Hull, and our reunion with Spit Brown.

Spit Brown is a world-famous fantasist who holds the record for the number of times a manager has been warned about his future conduct in one year.  He manages a football club at Kingston upon Hull – a diminutive village on the western side of the North Sea which he pretends is in the EPL.   The area is inhabited by a race of seagulls known as spitguls, hence the village is generally known as Hullspit or Hull Spitty.

Hull Spitty FC are the only club in the League to play in a ground owned by a rock band (KC and the Sunshine Band).  Their mascot Roary the Tiger was eaten by Billy the Dog during the Spittlegate incident.

Spit Brown played for Red Duster in the South Shields Business Houses League, before moving on to play for Green Carpet, Pink Desk, and Rather Dirty Tablelamp.   Spit Brown also played for Hartlepool of the Gillette Soccer Saturday League and Halifax.  According to the record books he also played for Blackpool under Sam Allardyce but got squashed.

Spit Brown’s greatest moment came in September 2009 when Brown claimed to have saved a suicidal woman from jumping off the Bumpy Bridge.   However the Bumpy Bridge Board who run the Bridge said they didn’t know anything about it and couldn’t find the woman.  Despite a nationwide manhunt by the sexually confused Sun, the woman has never been found, and although it is possible that Brown did perform an act which helped save the woman’s life it is also possible that like so much else in the world, she was an utter figment of the Spit’s imagination.

Spit Brown was encouraged into coaching by that fantastic Arsenal success story Bruce Rioch, whose maniac attempts to manage our club resulted in a team that possessed both Bergkamp and Wright could only scrape into the European Also League on the last day of the season.  Wright then handed in a transfer request. 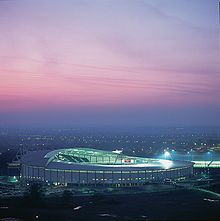 The North Sea at Night

After his time with Sam the Slug Brown also worked at Notlob where he was a caretaker, looking after the brooms and brushes.  It is said he was one of the first to invent rotational dusting.   He then came out of the cupboard and worked as Allardyce’s assistant for six years, before the team had rotated and fouled everyone so much they started to kick each other.

Spit Brown was then sacked by Derby County after seven months, having achieved the distinction of being beaten by Colchester in the Cup.  He left the sinking ship in 19th place in the league.

It was therefore quite reasonable for him to be appointed team bus (later team coach) at Hull Spitty on 27 October 2006.

In November 2008 he was fined £1,000 and warned about his future conduct after he admitted doing naughty things in a home game against Wigan when the club lost 5-0

On 26 December 2008, he famously kept his team on the pitch at half time and threatened to save them if they tried to jump off any bridges, after a typically embarrassing performance against Manchester City.

Spit Brown was again charged with misconduct for his behaviour in an FA Cup tie against Newcastle in January 2009 for a torrent of abuse against Chris Hughton which would have been more at home in Tottenham High Road than a football match.  He was fined and warned as to his future conduct.

On 17 March 2009, Brown claimed that he saw Cesc Fàbregas spit at the feet of his assistant manager following Hull’s 2–1 FA Cup defeat.  He then claimed  Arsène Wenger had refused to shake his hand at of their two previous meetings that season.  The FA acted was its usual hyper speed and Cesc was cleared on 22 May 2009.  Mountains of video evidence showed that Brown was also lying on the issue of the handshake.  He was warned about making trivial and false allegations, and sent back to the broom cupboard.

Brown and his club then entered a period of such farcical behaviour that the events were turned into a farce intended for the West End stage.  However impresarios refused to put the play on as it was too unbelievable.

Hull Spitty first extended their complaint against Cesc by claiming that he should not have been on the pitch, even though the game was over and he was the club captain.  Then they accused him of being dressed in an improper manner.

The FA called for evidence of these wild an insane allegations the likes of which no club had ever made before in the history of our Noble Winter Sport.

Then the Hull Assistant Manager who had been involved in making some of the wilder crazed allegations went missing for 10 days.  The club said they could not contact him in any way, and had no idea where he was!   Because of this the club could not fill in the requisite forms to substantiate the allegations.

The FA then charged Spit Brown with improper conduct in relation to comments he made about referee Mike Riley after the game.  He naturally denied the offence (a sort of spit jerk reaction),  was found guilty in a June hearing and once again was fined £2,500 (same as always) and warned about his future conduct (same as always).

Brown however saw this as a triumph – and indeed in one way it was, since he had proved that insane allegations against players and a club can be made and the FA “disrepute” charge defeated by having a member of staff going absent for a while.  Nothing more was heard about the “no right on the pitch” and “unsuitable clothes” allegations.

However these issues live on and will stay as a part of the legacy of a man who clearly has a different view of reality from most of us.

Indeed Brown regularly states that every win or draw is the greatest moment of his life, (one might have thought that saving a woman’s life would be the greatest moment’s of one life, but seeming not in the land of Spit) and he also sings to the crowd.

TOP ARTICLES FROM THE PAST FEW WEEKS

ARSENAL IN THE PAST…

Untold Arsenal is published by GigAsandwich Temporal Anemones of Basingstoke and the Micrododo Publishing Ziggurat of Croydon.  (c) 2010

6 Replies to “This saturday: Spit Brown – the man with more conduct warnings than any other and founder of rotational fouling”