Ref in this match was Chris Foy for 59 minutes and Anthony Taylor for the rest.

Because of this interruption we have two ref reviews in one article and I will also add the final score of the two refs and call this the PGMO score for this match.

What a way to start the match. Walcott being brought down inside the goal area ready to take a shot at goal by Collins, and Foy completely ignored it.

It was a clear foul. Collins clipped the ankles of Theo and didn’t touch the ball at all. Clear penalty. And as this was a goal scoring chance it should have been a red card also. But Foy did nothing at all. And that is the Foy we have learned to know in the referee reviews: backing out from big decisions when possible. It sure would have changed the whole match and would have made the match a bit easier for Arsenal. Now they had to fight very hard to get that first goal.

And in a way this was a pity for the ref as believe it or not…I couldn’t find much wrong with the rest of the first half. Get the penalty and the red card right and he would have had a perfect score.

Now he still had a great score of 87% counting all the decisions. If we put weight on the decisions it drops to just under 74%.  Looking at the important decisions the score goes down to 50%.

In the second half I could only judge 3 decisions before he couldn’t continue the match. And all 3 correct decisions.  Leaving Foy with a total score for one hour of game time of 89% overall. Putting weight on the decisions his score is just under 77% and the important decisions score was 50%.

The bias score for the only two wrong decisions going 100% against Arsenal.

On came Taylor and this is his score for the last half hour.

Well he didn’t start too bad and got most of his decisions correct at first. But then he slowly began to lose it a bit. A clear foul on Coquelin was ignored completely, not even an advantage was signalled.

Not even a minute later Collins kicked Giroud in the stomach with a kick from behind, hooking his foot around the body of Giroud. Again Taylor hadn’t seen it and gave nothing. Collins who should have been off since the 4th minute escaped a yellow card there.

And to bring some balance Taylor missed an obstruction from Chambers in the extra time. But that was when the match was already done and dusted.

The score for Taylor in his half hour was 70% and if we put weight on it the score was 73%. Only looking at the important decisions his score was 75%.

Taylor managed to make 6 mistakes in half an hour and 5 of them going against Arsenal. No big surprise here.

But what do we get over 90 minutes? 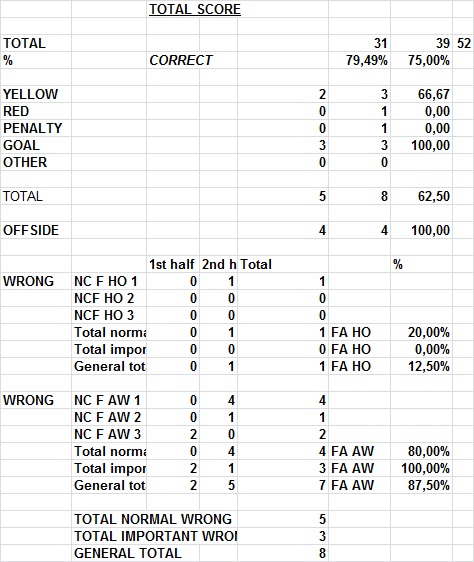 The total score for this match over 90 minutes for the two refs was in general 79.49%. That is one of the best scores in total.

If we put weight on the decisions we get a score of 75% in total. I also think this is one of the better scores of the season.

Looking only at the important decisions the score is 62.50%. And that also surely isn’t the worst score of the season.

The bias however is firmly against Arsenal. The biggest contribution is from Taylor in this but the biggest error came from Foy in the 4th minute of the match. It didn’t result in Arsenal dropping points but it sure was a big miss.

Final conclusion? I am now walking in to dangerous territory but looking at this it sure looks that we got one of the higher scores of the season. Maybe this could be used as an example on how having two refs over 90 minutes could help them in making better decisions? Maybe the match is too fast these days for only one ref to do for the whole 90 minutes? But you cannot draw such a conclusion based on one example.

Maybe next time we could have the two refs at the same time on the field? What would that bring to the score of our review?

Anniversary of the day