A short and positive update folks…

I exchanged emails with Arsenal today and got a very helpful and positive response from the supporter liaison officer.

So the next step is to mock up a couple of banners (using both the winning and runner-up designs) so the club can decide whether to approve it or not.

So here are the first efforts I’ve made – if anyone wants to improve upon them and can send me a file please do so at blacksheep63@me.com

And if you want to see the pics in better resolution, just click on the image. 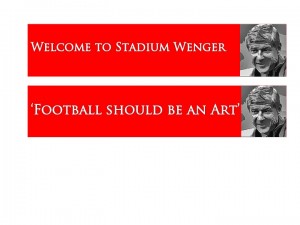