As getting tickets for Wembley was not possible for most of the local Untold Arsenal writers and for me from far away places it was completely out of the question. So with a bunch of 4 other Arsenal Belgium members we went for the screening in the Emirates.

On each side of the pitch Arsenal had put up big screens where you had a perfect view. 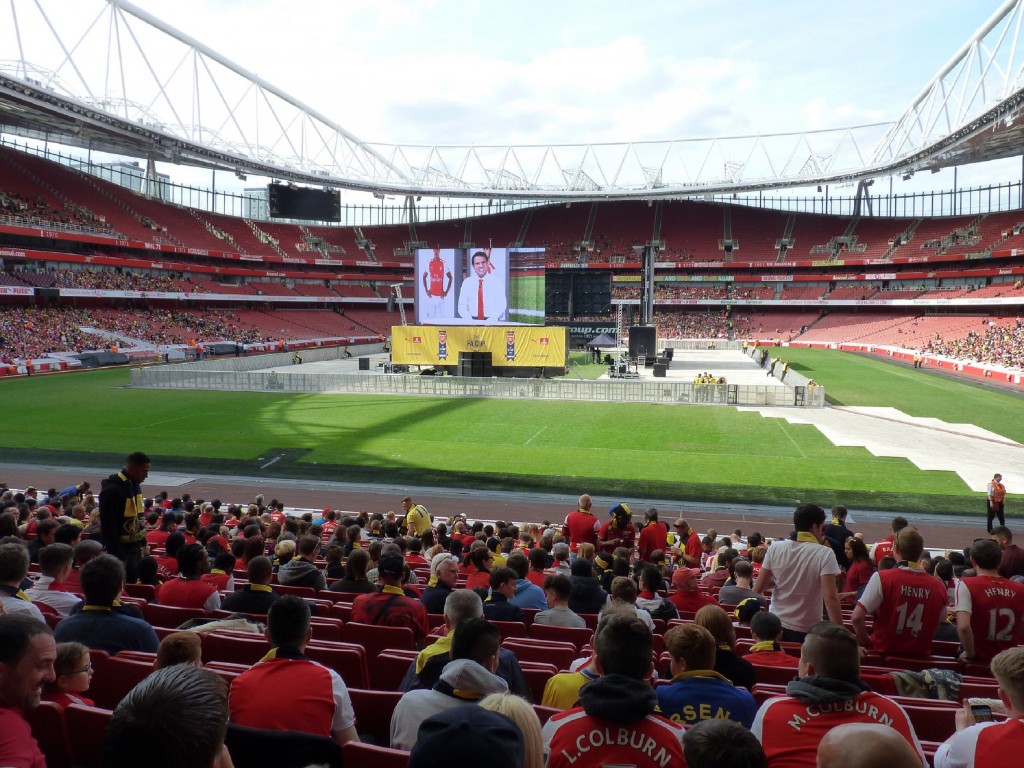 Picture taken from my seat in the clock end lower tier before the match.

You can sit anywhere you want in the stadium. Of course with the way the screens are set up it is not wise to sit in the corners. As that way you will not have the best view. Also notice the fact that compared to last season they put a fence around the screens. A kind of barrier to make the difference between sane people and well…. later more on that.

You could have drinks but I honestly didn’t ask for any food. I had eaten something outside the ground and wasn’t feeling hungry at all. I must say that where we sat we had big drinkers or the amount of Carlsberg was too small. From half time on they ran out of it. Not that I had any trouble with it as I don’t drink alcohol.

The atmosphere was great. Lots of singing before and during the match. We stood up when we had to stand up. We sang about the greatest team the world has ever seen. A song that from now on has to be re-written when we play FA cup matches. From now on I will sing this version:

We’re by far the greatest team

the FA cup has ever seen.

And once we got in front the atmosphere went from good to great. It was all smiles and laughter were we sat. Everyone completely enjoying the occasion. But I noticed that just before half time the stewards had to guide someone out from the seats. Hell, is it so difficult to just enjoy things? Or was he not an Arsenal supporter?

The second half was of course one long festive moment. Arsenal performing in a Majestic way. The crowd singing and supporting the team. And then minutes before the final whistle the crowd began to run on to the pitch. One brave soul first who got caught but then the floodgates opened and they came from all sides and angles.

The announcer said immediately that they were allowed on the pitch but that for safety reasons they fenced area was a no-go zone.

Now I don’t want to say bad things about fellow supporters but on this occasion I have to. 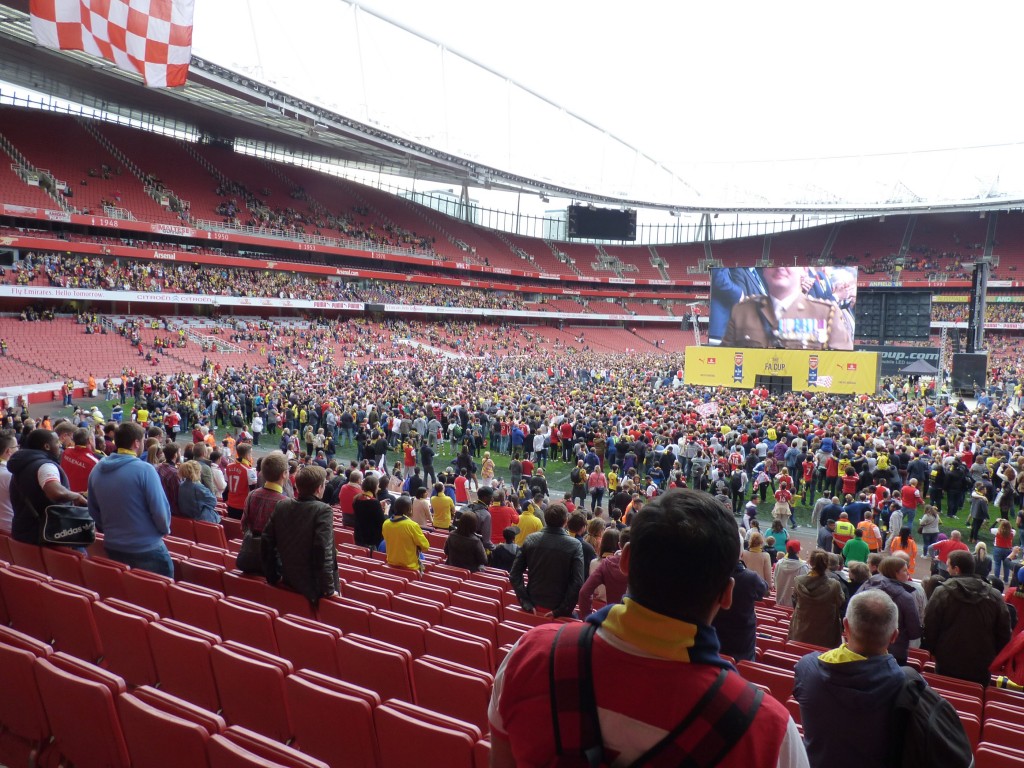 I loved seeing the enthusiast on the pitch. As I have been there, played there I don’t feel the need to go out on the pitch anymore. But I feel happy for those who have their first outing on the pitch.

But why oh why is it so difficult to stay in line with what Arsenal is asking you to do? They asked not to enter the fenced area and yet hundreds of them went in that area. Now I know that such screens cost a lot of money. And some idiots even tried to climb the screens for some unknown reason apart from not being well in their head. On the picture you can also see some idiots climbing the constructions where the speakers were hanging on.

Just imagine if something happens there? Someone falls off and breaks a leg or get killed? The screens also run on electricity and lots of wires go from left to right. Just imagine someone getting electrocuted?

It’s such a shame that people will do as if there are no rules any more. And the funny thing was that the idiots who were inside the fenced area could almost no longer see what was happening on the screens. If we wouldn’t have started shouting in anticipation when the cup was going to be handed over to Arsenal they would have missed that part of the day.

So let us not ruin the fun next time shall we?

Finally to make things completely bad another sad incident happened at my side of the stadium. When the screening had stopped we turned to go out of the stadium. And then in the corner of my eye I saw a steward removing someone from the ground again. I don’t know why and for what but suddenly the person who was being removed hit the steward on the head with something and the steward was bleeding terribly from a wound on his head. Other stewards rushed on to assist him and the person who did the hitting ran away at high speed. What pleasure do people get from doing this? For f*ck sake we just made an historic moment in the history of our club and people start fighting…. it’s a sad world sometimes. I hope the steward is all right now. But it sure put a downer on my feelings for a few moments. 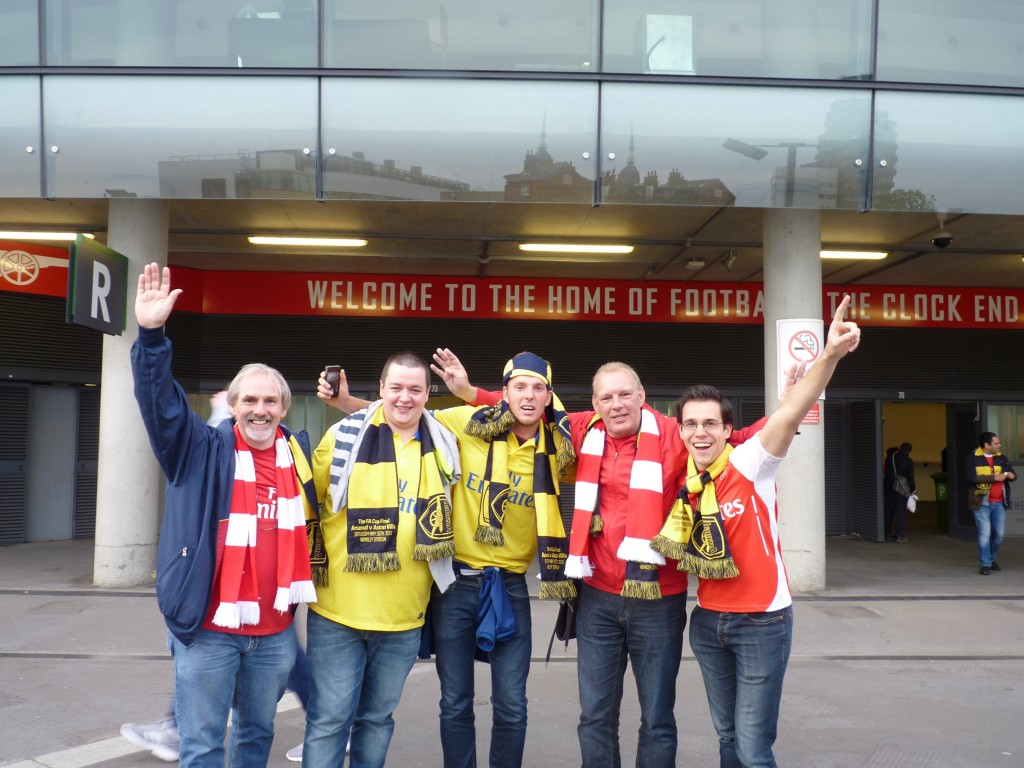 But all in all it was great experience. I thank Arsenal for the chance they give that way to supporters like us who can’t make it to Wembley. And I must say that once the match starts it feels as if you are in Wembley. In fact the Emirates is better than Wembley so it feels even more at home during the match and when we won.

We sang the whole day, evening and night. And when we woke up on Sunday morning the 5 of us could hardly speak anymore. It was great out there.

Now let’s hope that Arsenal again will learn from the experience and will also continue to do this in the future. We will be back if we get the chance to be there.

16 Replies to “Being in the Emirates for the screening: the great, the good but also….”