The secretive organisation, PGMO, which is believed to control football refereeing at the professional level in England, have long been rumoured to be closely associated with the Italian Mafia, and it seems that the influence of their patrons is spreading.

While in England PGMO work in slow, ponderous and highly secretive ways however, it appears that they are using overseas venues to experiment with new approaches – including the arming of referees.

A colleague of mine at the Hospital Universitário de Certas Coisas has informed me of a growing number of shootings of players, linesmen, club directors, players and peanut retailers by referees in recent months, and now we have our first pictures of such an incident.

I am told PGMO is monitoring the situation closely and has secretly prepared a series of highly speculative briefing papers which the Independent, Telegraph and other pro-PGMO newspapers are set ready to publish as fact.

At the moment the proposal is only that referees should be fully armed in amateur games, but it is understood that this will be a preliminary proposal by PGMO before the full detailed arrangements of issuing weaponry to all referees as standard kit will be implemented in time for FA Cup games next season. 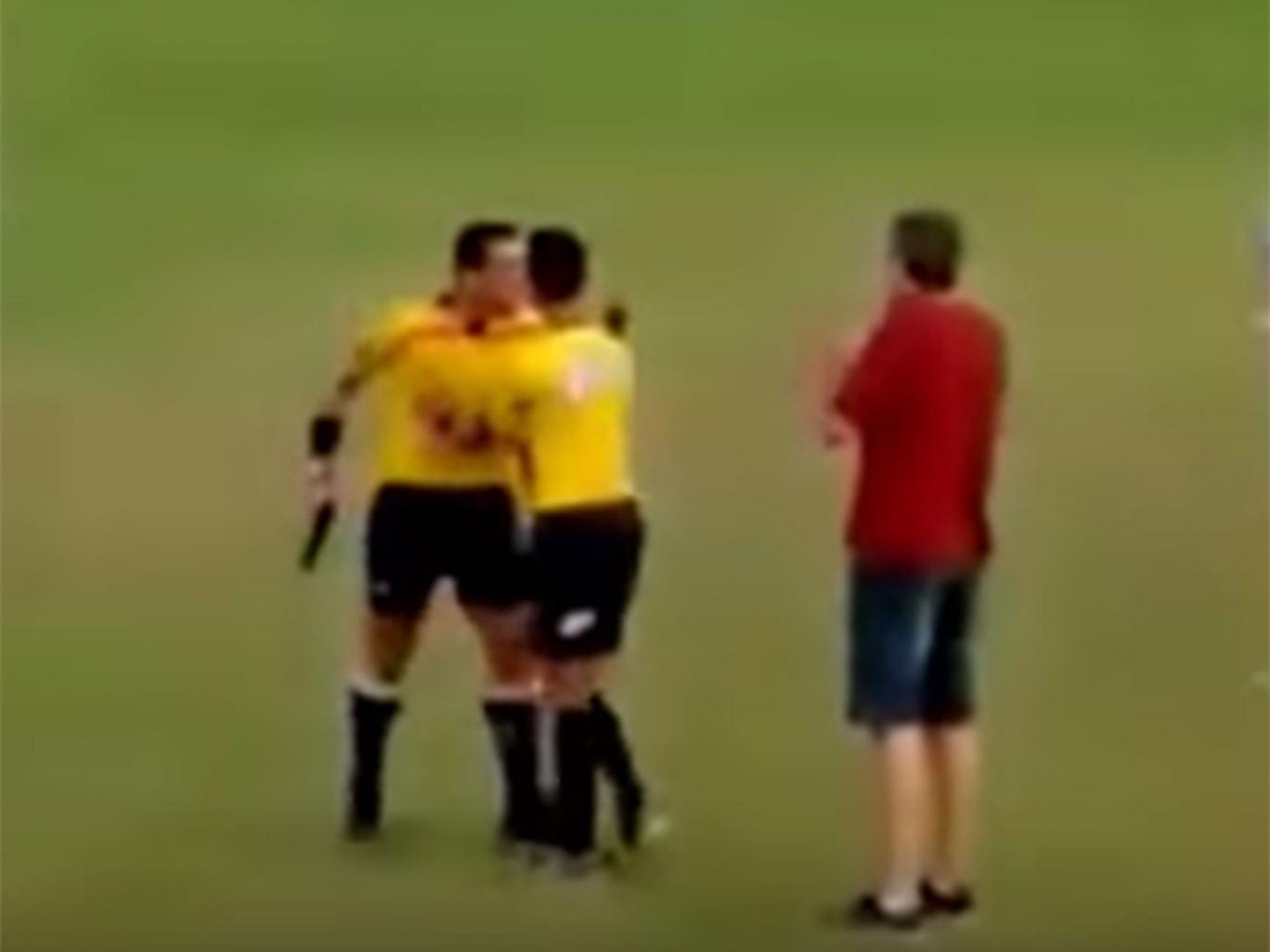 Amateur games as we all know (well those of us who played them) can either be gentle affairs or the sort of rough and tumble that makes you wonder if working out in the Arena with the lions in the days of the Roman Republic might not be easier.

And here we can see a referee, who has been trained in PGMO tactics, taking reasonable precautions to ensure a game does not get out of hand.

In the picture above we can see referee Gabriel Murta replacing the need for the namby-pamby notebook affair that has so brought the game in England into total disrepute, and instead using a much more satisfactory and to the point revolver to deal with a disputed offside call in the match between Amantes de Bola and Brumadinho.

In case you have not been west of Barnsley in recent months allow me to explain.

Brumadinho is in the region of Belo.  And I know this (perverse and odd person that I am) because the Centro de Arte Contemporânea Inhotim  (Inhotim Museum of Contemporary Art), is in the city of Brumadinho.  The museum is based on the land of a former British engineer known as Senhor Tim.  He sold the land to an engineer, and the new owner  Bernardo Paz brought in a lot of artists to work there.

Now while in England anyone who works in the arts is considered a scrounger, a weirdo, and quite probably a Man U supporter who lives in Cornwall, the Brazillians don’t have this narrow minded approach.  In Brazil they love art.  And indeed in the Inhotim Museum one pavillion is dedicated totally to the work of one of Paz′s multifarious ex-wives, the Brazilian artist Adriana Varejão.

So that is one of the two sides involved – Brumadinho.  The other was Amantes de Bola.  Their name needs little explanation I am sure.   Bola means Ball in Portuguese.  And Amantes means “Lovers”.   So Lovers of Football is a possible translation for Amantes de Bola.

Anyway back to the game.

Officiating the match between the art lovers of Brumadinho and the ball lovers of Amantes da Bola, referee Gabriel Murta was forced to pull out his handgun after being kicked and punched by an Amantes da Bola player.   His action was swift and just.  “This is exactly the sort of refereeing we need in England,” said Ima Turnip, head of the PGMO Weaponry Division.

“The decisions of referees are being discussed and analysed in every corner and we simply cannot have this.  We want the re-establishment of moats around all pitches with crocodiles in place to deal with any malcontents.

The boss of the Federação Mineira de Futebol’s referee association Giuliano Bozzano said of his compatriol, “He acted in self-defense. Everyone knows the difficulty of amateur championships.

“The referees have already been through difficult situations. We have had several cases of referees being assaulted and even shot.”

“There you are, I told you so,” said Donna Quoteme, head of firearms training at PGMO headquarters in Naples.

The referee, a Mr Murta, clarified his view, which for legal reasons cannot be questioned by anyone.

“I took a slap in the face and a kick in the shin,” he said. “I was pressured by several players and brought out my gun to arrest the offending player. But he ran, jumped the fence and ran away.  Fortunately visitors from PGMO who were assessing our work were at the ready with machine guns and an armoured tank and they quickly dealt with the lad.

“I just wanted to defend myself and take action as a police officer. I was beaten as a citizen, he committed a crime.”

The Referees Association of Brazil have held an enquiry and found that their member had not acted “disproportionately” in these circumstances.

Asked if it was right if a referee’s association should investigate the action of one of its own members, the spokesperson said, “That’s what the FA does in England isn’t it?  Have you ever heard of the FA taking evidence or letting a matter be considered by a third party?  Of course not!   Once we start doing that we’ll never hear the end of it.”

And I think we can all agree.

19 Replies to “PGMO ready to recommend that all league referees should be armed during matches.”