The Match Report by Andrew Crawshaw

The Continental Tyres Cup has been in existence for five years and is essentially the replacement for the Ladies League Cup.  The competition is in two phases, the first being a group phase comprising all of the Ladies Teams in the Women’s Super League.  The top eight teams then go into a knock-out phase from which Arsenal and Notts County emerged as finalists.

This Cup can also be considered as Arsenal’s as we have been in every single final only losing once last year to man City Ladies.  Could we regain ‘Our Trophy’?

This year the final was played in Rotherham at the New York Stadium (capacity 12,021) a new(ish) stadium officially opened by Prince Edward on 12 March 2012.  It has been Rotherham United’s home ground since the start of the 2012/13 season.  Named the New York Stadium after the area of land on which it was built and not for any connection with the somewhat larger New York in America. 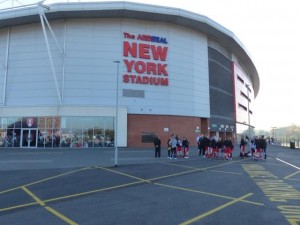 This year the final was played in Rotherham at the New York Stadium (capacity 12,021) a new(ish) stadium officially opened by Prince Edward on 12 March 2012.  It has been Rotherham United’s home ground since the start of the 2012/13 season.  Named the New York Stadium after the area of land on which it was built and not for any connection with the somewhat larger New York in America.

My day started early as I had booked a seat on the official coach leaving the Emirates ground at 09:15, that meant getting to my local station for the 07:40 local train to Highbury and Islington and the 15 minute walk to the ground.  My first time on an official away trip – new experiences are supposed to keep those of us in the retired generation young at heart (or so I’m told)  I’m sure the good doctor will confirm this to be so.

My day started early as I had booked a seat on the official coach leaving the Emirates ground at 09:15, that meant getting to my local station for the 07:40 local train to Highbury and Islington and the 15 minute walk to the ground.  My first time on an official away trip – new experiences are supposed to keep those of us in the retired generation young at heart (or so I’m told)  I’m sure the good doctor will confirm this to be so.

A small coach as there were just 24 of us booked, very comfortable with a mixture of standard side by side seats and blocks of four with a table.  I was first to arrive (I knew I could have caught the next train) and chose a seat on one of the tables of four.  I was warmly greeted by an (un-costumed) Gunnersaurus and over the next 25 minutes or so the other passengers arrived and we set off, we picked up a few more fans at the Gateway Services on the M! and set off northwards on our journey to South Yorkshire.  No stops on the way as Gunnersaurus had to be suited and booted for the pre-game activities outside the ground.  We arrived shortly after 13:00 in warm sunshine, the morning mist having cleared.  My traveling companions occupying the other seats at the table were Rachel, Owen and Marcia all members of the Arsenal Ladies official Fan Club. 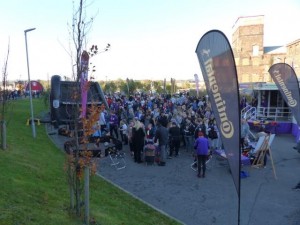 I walked back into the town to get a drink (orange juice and lemonade) and something to eat –  Weatherspoon’s roast beef with all of the usual trimmings.  For those of you not in the UK, Weatherspoon’s is one of the largest chains of Pubs that are country wide and serve a range of adequate but not outstanding meals at reasonable prices and without too long to wait before they are served. Nutritionally sound but definitely not gourmet.

Suitably refreshed I walked back to the ground where the kids zone entertainments were in full swing.  Gunnersaurus is in the picture in the distance, you can just pick out his red and white scarf.

With about 40 minutes to go I entered the ground and found my seat, virtually on the half way line and in row 5 so I had an excellent view.  Official attendance was later announced as 5,028 but the ground would have looked fuller on the TV screens as all of the supporters were placed in the half of the ground opposite the director’s boxes where all of the FA ‘big wigs’ were gathered.  Both teams were out doing their warm-up routines.  Interesting to look at the differences between the Ladies, the U21/19s and the Senior teams – all are slightly different.  The ladies back four had their own drill where they practiced coming out and dropping back as a unit which I haven’t seen with either of the other two groups. 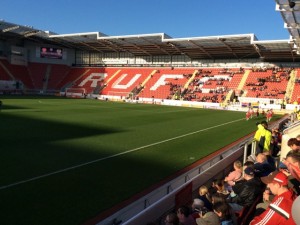 Notts County supporters were in the majority, not surprising really as they are far closer to Rotherham than is London.  They were also in fine voice! 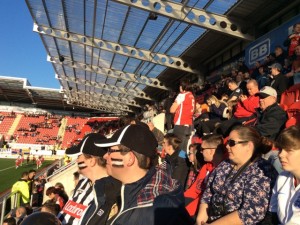 The two teams were :-

The match officials were

The game started with early Arsenal pressure leading to two corners (neither of which came to anything).  In Min 5 there was a nasty challenge by Amy Turner on Rachel Yankey , earning the County player a stern talking to.  This could easily have been a yellow card.  Free kick to Arsenal but again not coming to anything.  In Min 8 there was an Arsenal foul and free kick on the right hand side of the pitch about 30 metres from the Arsenal goal.

Before the kick there was a hiatus in play as the ball had to be changed three times before Jane Simms was happy.  I’ve never seen that in any professional game of football.  Someone not having done their job properly or a very poor set of balls!

Following the free kick Veenendaal made a fantastic save to keep the game scoreless.

In Min 15 we had a fourth replacement ball!

The spell of play from Minute 7 to 15 had County very much on top with Arsenal hanging on, just.

Arsenal gradually came back into the game and in Min 20 forced Telford into a save the equal of Veenendaal’s.  In Min 22 Jensen was lucky not to get a yellow card when she pulled the shirt of a County player who was past her.  Just a foul.

In Minute 26 Arsenal Score – Jordan Nobbs gets the ball on the right wing and runs and runs with it managing to beat the keeper at the near post.  TO THE ARSENAL ONE-NIL cry the faithful in the crowd.  A great individual goal.  The fifth ball obviously more to Arsenal’s liking than the previous four.

Min 32 A yellow card for Greenwood for a high challenge.  Finally the referee draws a line, many of the County challenges had been “good old-fashioned’ in nature and not entirely in keeping with the modern laws of the game.

In Min 34 came the incident that possibly turned the game, Laura Bassett came in from behind on Vicky Losada in, what caused me to say “that was an awful challenge” and was shown a straight red card.  To me the card looked entirely appropriate, only seeing it once and from the opposite side of the pitch.  The challenge looked to be reckless, from behind and quite possibly with studs showing.  That she got the ball with one foot was irrelevant as the challenge was bound to take out the player.  Needless to say the County supporters, players and staff were incensed and made much of it after the game.

Min 45+2 County very nearly get a goal back, phew that was a close one!

So half time and Arsenal would seem to have done the hard work, two – nil up and County having to play with ten players.  Need to be careful in the second half and not throw this one away.

Min 49 Nearly again for County following poor defence by Arsenal.  Janssen and Rose combining to clear a loose ball off the line with Veenendaal beaten.  Come on Ladies concentrate!

Min 60 Yellow card for Corredera to ironic cheers from the County supporters, not a bad foul but the cumulation of a number of minor ones.

Min 68 So nearly a third for Arsenal Natalia’s header hits the outside of the post.  This was to be her last meaningful action of the game as she was substituted in Min 74 Chioma Ubogagu coming on with fresh legs.

Min 76 Another high challenge from a County player, this time Aileen Wheelan on Janssen another yellow card.

Min 80 Nearly one back for County an effort just over the bar – close again.  Getting nervous now so near, can’t let them back in the game so near the final whistle

Min 85 County header but both high and wide – we will do this.

Min 86 Jordan Nobbs announced as Player of the Match – loud cheers from the Arsenal supporters.

Min 90+2 Arsenal score – Chioma Ubogagu with a solo effort down the left wing and a great finish TO THE ARSENAL THREE NIL.  Game over Phew!

A flattering score in truth, County never gave up and showed real fight throughout, in many cases too much – some of their challenges were really agricultural and they could easily have been down to fewer than ten players with a stricter referee.  Jane Simms did everything possible to keep the contest even in terms of numbers on the pitch.  Without recourse to video technology, the sending off looked right in real time and she was certainly well placed to make the decision.

Captain Casey Stoney applauds the supporters after the game. 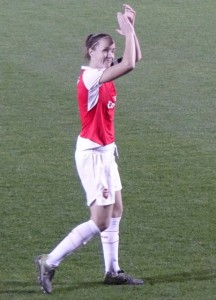 On to the celebrations and what a cock-up they turned out to be.  5,000 spectators on one side of the ground and the big-wigs on the other side.  Naturally all of the celebrations were facing the FA side so all we could see were the backs of the players.  Jordan Nobbs received the Player of the Match award first, County were waiting patiently to receive their runner-up medals when the Arsenal team were invited up to get their winner’s medals.  No-one moved expecting the announcer to correct his mistake, but nothing happened.  Eventually the Arsenal team went up and collected the trophy and medals effectively unseen by the crowd.  Even after all of that there was still no invite for County to get their medals.  Honestly it was an absolutely shambolic presentation ceremony and whosoever organised it should by now no longer be employed!