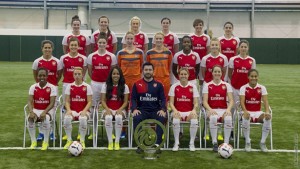 The Ladies have just had their pre-season photo shoot here is the main picture courtesy of Arsenal.com

The photo gives a good idea of the make-up of our main squad for the season, which has a number of changes from last year.  We are allowed a squad of 21 so it would seem likely that there will be one further addition in the near future.  It is rumoured that this will be the 21 year old Nigerian International forward Asisat Oshoala after we activated a clause in her Liverpool Ladies Contract.  Any deal will be subject to her being granted a work permit and agreeing personal terms.

The main change in our squad for this season is the signing of Fara Williamson from Liverpool.  She is the most capped international player and plays as defensive midfield.

The 15 members of our Development team squad are

The Ladies fixtures start on 20 March with a FA Women’s Cup 5th round tie, (we’ll know who we are playing after the 4th round on 28 February.

The first league game is on 23 March at Borehamwood against Reading.  I would urge you to put this Wednesday in your diary to come along and support the ladies.  Their football is good and the refereeing normally far better than the men get.

The second division (WSL 2) ended with Reading, whom we play first this season, as champions, and so promoted.  Their campaign included the highest score of the season 8-0 against London Bees.

From the information available it seems that Bristol Academy were relegated, but Reading and Doncaster both promoted, with Bristol Academy changing their name to Bristol City.  They will be joined in WSL 2 by Sheffield Football Club Ladies – an interesting team, in that they are the Ladies team of Sheffield FC which proclaims itself The World’s First Football Club, having been formed in 1857.

Sheffield won the FA Women’s Premier League Northern Division in 2014–15 and so have now been promoted to WSL2.

More as the season gets underway.

The latest Untold book is Arsenal: The Long Sleep 1953-1970 with an introduction by Bob Wilson, available both as a paperback and as a Kindle book from Amazon.   Details of this and our other titles can be foundArsenal Books on this site.

5 February 1921: Last game for Fred Pagnam: Sunderland 5 Arsenal 1.  He had testified against his own team mates in the Liverpool/Man U match fixing scandal of 1915 – and comes over as a man of great honour at a time when every dirty trick possible was being pulled.

5 February 1926: Joe Hulme signed by Chapman from Blackburn.  He went on to play 333 league games across a 13 year spell; a 1930’s version of Thierry Henry, an absolute master at counter-attacking at pace.