It is often said, particularly when the England team do badly, that that football was invented by the English.  In the wake of our latest disaster, I decided to do a bit of research on the subject for the benefit of Untold readers.  It turns out that the idea that we invented football is, of course, complete and utter nonsense (as you might suspect from watching Harry Kane taking a free kick).

The origin of football is hard to identify.  Certainly the Ancient Romans and Greeks played a similar game.  Indeed, similar games played with air filled balls can be found all over the world, including aboriginal Australia, native North America and ancient China.  Various forms of football were played throughout the middle ages with a wide variety of rules in different eras and in different regions.  It is not clear whether the name ‘football’ refers to the fact that the ball is struck with the foot, or the fact that it was played ‘on foot’ (as opposed to on horseback or sitting down) 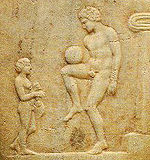 Football was a casual leisure activity, so it is not well recorded by historians.  However, more than 30 English laws passed between 1314 and 1667 tried to ban the game, suggesting that it was every bit as popular then as now (if it wasn’t popular then why so much effort?).  The reasons for the bans were various from ‘creating a disturbance’ to ‘endangering national security, by distracting men from archery practice’.  The game also seems to have been as widely loved across all strata of society, as today.  Henry VIII was one of the kings to try to ban football, but a pair of football boots is listed in the inventory of his possessions at his death.

The game became formalised thanks to the efforts of public school boys in the early-nineteenth century, who started to write down rules and regulations governing things such as size of goals, number of players, goalkeepers etc.  The earliest known of these codes is the popular 1815 Eton code. However, each school created its own code.  The growth of the railways in the 1840s made inter-school matches a practical possibility, and the variations in the rules became a problem.

When football playing boys went up to Oxford and Cambridge, they found that they didn’t have a common understanding of the rules, and this led to the development of the Cambridge rules in 1848, which were widely adopted.  However, alternative sets of rules, notably the Sheffield rules, were still widely played.

Various attempts were made to standardise these codes, but it proved difficult as the men from each school were keen to retain the bits of code that were unique to them.  The main problem was that some codes allowed players to pick the ball up in their hands, and other codes allowed players only to kick the ball with their feet.  This created different styles of ‘tackling’.  In the codes where the players held the ball in their hands, it was necessary to physically manhandle the player to the ground in order to recover possession of the ball.  In codes where ‘handling’ was not allowed, it was sufficient to dispossess your opponent by just kicking the ball away.

The main division here was between the schools which played on fields (Rugby, St Pauls, Wellington), and those which played in paved courtyards (Winchester, Harrow, Eton, Charterhouse).  In schools that played on paved courtyards or cloisters, manhandling the player to the ground was dangerous and painful, whereas on a nice grassy field, such things were more acceptable[*].

In 1863 twelve clubs got together at the Freemasons Tavern in London to form the ‘Football Association’, in another attempt to standardise the rules.  This code was first known as the ‘London rules’, but later just the ‘Association Rules’ after it was merged with other sets, most notably the Sheffield rules, which introduced concepts such as the corner and free kick.  175 years later the ‘FA’ is still going, although all but one of those original twelve clubs have ceased to exist (Civil Service FC is the sole survivor).  The FA is the progenitor of the modern world game, and it is this fact that has led to the claim that Englishmen invented football.  The modern word ‘soccer’ is a slang contraction of ‘association footballer’

One of the twelve clubs, Blackheath withdrew from the process of setting up the FA, in protest that the rules allowing ‘running with the ball in hand’ had been repealed.  Blackheath, originally formed as an ‘old boys’ club for former pupils of the ‘Blackheath Proprietary School’,  continued as a club, playing matches against other clubs that played the ‘Rugby style’ game.  Eventually in 1871, 22 clubs (including Blackheath and the author’s alma mater, St Pauls School) which played the ‘rugby style game’ got together at the Pall Mall restaurant on Regent Street and formed the Rugby Football Union.

Blackheath, which still exists today (unlike the eponymous school which closed in 1907) is the oldest rugby club in the world.  It has the distinction of having been present at the founding meetings of both the rugby football union and the football association, demonstrating neatly how indistinguishable these early codes of football were.[†]

In 1871 the FA introduced its famous ‘challenge cup’, and the FA Cup is still contested annually today, with Arsenal and Manchester United jointly holding the record for the most wins (12 each)

As the nineteenth century wore on, various Factory Acts were enacted.  These acts tried to stop working class children from spending all their waking hours working in factories.  The idea was to allow some time for them to go to school, but inevitably they also used their new found freedom to play football.  The result was that working class children and, in time, working class men, started to become as good at football as the public school boys.

The football world changed forever during the 1883 FA Cup Final.  Defending champions, Old Etonians, lost 2-1 to Blackburn Olympic after extra time, in front of 8,000 at the Kennington Oval (now exclusively a cricket ground).  Blackburn (folded 1889) were the first professional team to win the FA Cup, but no amateur team would ever win it again.

You have to remember that at this point in time the English public school boys were the pre-eminent power, not only in England, but the entire world.  Britain was the leading superpower of the time and the public schools were considered the training grounds of the global elite.  There was little doubt that ‘god was an Englishmen’ and even less doubt that public schoolboys were his (he was definitely male) chosen agents on earth.

The ‘Corinthian Spirit’, the embodiment of the public school values of ‘grit’, ‘pluck’ and ‘trying jolly hard’ were not to be trifled with.  Professionalism, and training were considered forms of cheating.  As the game became ever more popular with the working classes, the public school boys struggled to hold on to their monopoly of football administration.  In particular they were less numerous in the North of England, where they had lost control of the rugby associations, and soon lost control of the county FAs there.  The tide of professionalism became unstoppable.  Football is a physical game, in which stamina and strength are huge advantages. Working men were naturally better conditioned than gentlemen of leisure.

Both of the main football codes were now at a crossroads.  Clubs like Blackburn Olympic were flouting the amateurism rules by arranging sham jobs for their players. It became clear that the professional tide was unstoppable, but also that the amateurs could not compete with the professionals.  The Football Association relented in 1885, when 30 northern clubs threatened to pull away and form the professional ‘British Football Association’.  The Rugby Union didn’t want to give in to such threats and as a result, it split into two in 1895, a professional league based in the north (now known as Ruby League) and an amateur game, based in the south (Rugby Union).   The Rugby Union remained an amateur code until 1995.

Twelve of the FA clubs from the north and midlands, that had threatened to break away, now formed their own competition.  Although the FA had reluctantly allowed professionalism, it would not countenance a professional league so, in 1888, the clubs formed their own organisation known as the ‘Football League’.  Crucially, unlike the Rugby League, the Football League decided not to form its own rules code, so the Football League clubs remained within the mainstream game. Top flight football would not however, return to the control of the FA until 1992, when the Premier League was formed.

Even after the formation of the Football League, the London FA still had considerable autonomy and resisted the nasty Northern fashion for professional players, until 1891, when it finally relented and momentously allowed Woolwich Arsenal to become the first professional team in London.

[*]The traditional story, that there was a game called football, where nobody handled the ball until William Webb Ellis, a Rugby schoolboy, picked it up one day in 1823, is attractive, but entirely apocryphal.  In fact, the rugby version of the game may be closer to archaic forms of football than the more popular soccer code that has become the world’s most popular game.  Certainly, ‘scrummages’ are common to many of the surviving forms of football, as is the handling of the ball in routine play.  So it is curious that the Rugby community itself, perpetuates the myth that Rugby is some kind of descendant or variant of true football.

[†] Francis Campbell, representing Blackheath, at the fifth meeting of the FA, argued that: “hacking was an essential element of ‘football’ and that to eliminate hacking would “do away with all the courage and pluck from the game, and I will be bound over to bring over a lot of Frenchmen who would beat you with a week’s practice”, thus demonstrating both the prevalence of other forms of football in other countries, and the disdain of public school boys for foreigners.  Blackheath withdrew from the FA at the sixth meeting in protest at this and other issues.

6 Replies to “Is football really the game that ‘we’ invented?”