Yesterday I was in the away end at Lens for the match Lens – Arsenal. I even have a picture to proof it thanks to Usama who was alert to make a screen shot. 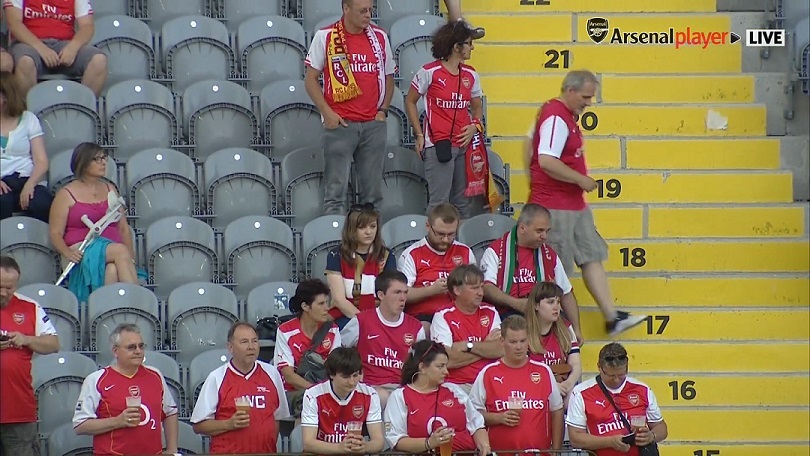 Walter going down to get some (much needed) refreshments

I have been to a few away grounds in Europe over the years but what I have survived yesterday was the oddest visit to an away ground one can find.

On the ticket in front of me it said that we had to use access P10. Okay. Fine. That was the start of our search for the Holy Grail. The Holy Grail or Access P10 as it is know in Lens and surroundings. The Holy Grail hidden at the stand called Trannin.

We had parked our car on the parking lots just outside the stadium. We went to the closest entrance at the stand Lepagnot and a guy said: “You have to go to the entrance from the Tarrin stand. Just go that way.”  And off we went. Carine in her wheelchair along with myself and two other members of Arsenal Belgium.

They had gone around the stadium already before we could hand them their tickets. And stepping and pushing around the stadium we went. I heard the sound of coconuts in my head and felt like in the Monty Python movie. We came passed the entrance of the stand Delacourt. Go further they said. So we did. We saw the entrance of the stand Xerces-Marek. Luckily they made way for our wheelchair as it was impossible to go round them as the queue was immense.

Ahhhhh the entrance of the Tribune Trannin. The only problem was that it was an entrance some 15 meter above the street level we were on. And the only way to get up was to use the stairs. I didn’t count them but it looked like some 100 steps. Carine can walk a bit but I felt it coming and didn’t want to take any risk and went up to the steward on top of the mountain of steps. “Non, non”, he said in French, “the visitors entrance is further (plus loin).

He he, lucky I didn’t let Carine take those steps for nothing.  Pushing and stepping we went. And then we bumped in to some other desperate looking Gooners. “Do you know where the entrance is?” was the most asked question in Lens yesterday. We followed the instructions as I do speak French and understand French so I know what they had been saying.  Just follow the instructions.

We passed a green/blue gate. Could this be the visitors’ entrance? Well the gate was closed. And as you couldn’t see through it we went passed it. And then we came in to the streets again. Bumping in to more desperate Gooners. If by any chance we knew the visitors entrance? We asked local supporters and they all didn’t know the visitors entrance. Some said: go back (in French of course) and others said: no go further down the road and then turn left again.

On one of those occasions we suddenly saw a bus driving up a street and blimey it was the Arsenal bus with Wenger sitting in front of his troops at the front of the bus. I was so surprised I forgot to take some pictures. We followed the bus in the hope that we might get the visitors’ entrance at the end of that street….. but alas…. again they send us further down the road again.

To make long walk short… after a while we came back at the entrance of the Lepagnot stand. Where we had started our search for the Holy Grail : entrance P10.

We decided to go in there as the queue was already big and then we would see and if needed we just could enter any stand and trying to find a place no matter where.

But after having passed the first check point in stead of going in the same direction I decided to turn left and move to the most important stand. I knew the visitors end was just beside that particular stand and it would bring us as close as it could be.

A brilliant idea. One of the best I have ever had. Our little group of desperate Gooners (some 10 people by now as they all joined us in desperation and having heard we spoke French with the locals) just turned left and went for it. And lo and behold we bumped in to a steward in a grey sweater.

The first steward who didn’t say: “the other way” or “go further” (in French). He saw our Arsenal shirts and felt something was wrong. I think the wheelchair pushed him over and wanted to help us. I explained what had happened to us and how we had been pushed around for some 2 hours! And then he took us under his strong arms (I wouldn’t have started an argument with the way he was build) and he opened gates for us that were closed before.

And he took us to the stand Trannin right at the foot of the visitors end.

But this is France and things have to go as they should go so he said we had to go to the real visitors end and so we had to follow him and went passed the stand to where we should have gone in. And then he put us outside the stadium again at the entrance where some 40 cops in full battle dress were waiting for the Gooners… that didn’t come as the Arsenal end was almost completely empty apart from a few lucky ones that had found the entrance…

But to be in and then go out to get the ticket in the machine… I heard more coconuts clapping in my head. I don’t think even Monty Python could have invented that…..

So we were at the right entrance but back on the outside. We put our ticket in the machine, they had to open the gate where they had let us out again to allow Carine and the wheelchair entrance again (couldn’t it have been easier to just let her wait inside for the rest of us and let someone else put her ticket in the machine? Oh well…) but we were in. Almost 2 hours after starting our search… how hard can it be to find the visitors entrance of a stadium????

Fact is that when the match started I think only 20% of the Gooners were in the visitors end. I think even a lot gave up on it after a while.

But we made it. And this is only because of one head-steward taking up his responsibility and helping desperate fans on their search for Entrance P10.

Lens, you should be ashamed of your organisation. Oh and don’t get me started on how Carine had to go up the stairs of the stand on her crutches…. That was almost another Month Python worthy story again…

38 Replies to “Lens – Arsenal, The most strange away end in the whole football world (or the search of the Holy Grail)”