With the new Premier League season nearly started, we can barely suppress our anticipation and excitement for the year up ahead.

After a solid year, the Gunners are heading for the next season with a reinforced midfield and possibly even a new striker, giving us much more to hope for than last year. And nowhere is that hope more noticeable than when we go to our bookies, who are looking forward to a good betting season just as much as we do.

Luckily, we live in a day and age where betting is as simple as unlocking your phone and going to your favorite bookmaker online, which will be nothing but convenient when the seasons begins and we start itching for live bets.

Now, some of you might prefer online casinos as they always give away bonus codes, but nothing really comes close to football bets. So, if you prefer the former, you can just get the codes at No Deposit Codec, but if you’re here for the latter, let’s take a look at what the odds say for Arsenal this season. 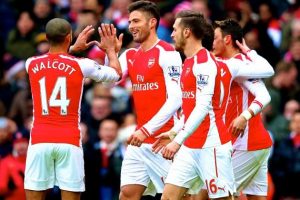 When it comes to the Outright Winner odds, Arsenal have lower odds than last year but position-wise they remain the same and are still ranked third by every bookmaker, making them a sure bet for the top 4. The current odds for Arsenal winning the Premier League range from 11/2 to 31/5 (the middle ground being 6/1), which puts them right behind Manchester United as second and Manchester City as first favorites – the odds of which jumped almost immediately after Guardiola took over.

Looking at the tricast and winner odds, the safest (and least profitable) bets are Arsenal finishing within the top 4 and the top 6, where the bookies give them the 3rd best odds of 4/7 and 1/6, respectively. But betting extremely safe bets can only be worth it if you invest a lot.

The top goal scorer odds are one of the least safe bets (unsurprisingly), with Giroud holding the 10th spot with 16/1 odds.

Following last year’s performance, fans won’t be surprised by seeing Arsenal at the 8th place in the Champions League Winner odds table with 25/1 odds and preceded by both PSG and Juventus. But, as with previous years, betting on Arsenal to take the cup is a far shot and you’re better off with betting on individual matches instead.

The League Cup odds are fairly better, with Arsenal being 5th in the table with 10/1 odds, but still, the safer bet would be the FA Cup Winner, where Arsenal are fourth in the odds table with 8/1 odds and are preceded only by Chelsea and Manchester United – who in some tables have the same odds as the Gunners.