There is the strangest thing on the Sky site today (at least at the moment I write this) in which they have a page which they proclaim as covering the recent results of Arsenal and Qarabag.

What it should be called however is a “selection of results from the two clubs with no real link between what we have chosen in each case” or something like that.   For Qarabag they only contain Champions League and Europa League results.  For Arsenal they include Premier League, Europa League and League Cup.

So what, I wonder has caused them to get into this mess?  Surely they are not letting computers set up their match previews without anyone checking?  Whatever next!

But that seems to be where we are, as the squad noted by the Mirror proclaims.  But more on that in a moment.   Here first of all is the real list of Qarabag games of late…

If I have got this wrong please correct me.  But as far as I can see Qarabağ are neck and neck at the top of the league but Neftçi have the better goal difference and yet are shown in second place.  It is all a bit too confusing.

Even more confusing is the fact that the web site I found had three stadia listed for the club, but I think this might be a picture of where  the game is being played.  I think it holds about 35,000. 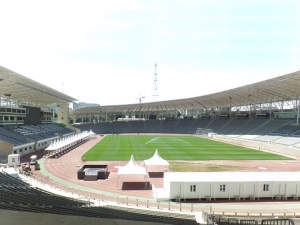 Again if I have got totally the wrong place do tell.

We know we will not have Henrikh Mkhitaryan as Arsenal chose not to apply for a special work permit.

This is because Armenians can’t go to Azerbaijan but Uefa rules say that political restraint of player movements is not allowable.  But the reception Mkhitaryan would have got made it something he has chosen not to do, quite reasonably in my view.

Hector Bellerin, Alexandre Lacazette and Mesut Ozil were all spotted at the airport for the trip to Baku this Wednesday morning.  It takes just under six hours and is a journey of around 4000km.

Obviously we expect to have Bernd Leno in goal – oh and here’s another thought from Sky, “Arsenal will look to maintain their 100 per cent record in the Europa League”.  OK: played one won one.

Iwobi is expected to be in the team and Monreal could finally get a break after being forced to play in every game because of the Left Back Crisis.  Sead Kolasinac and Stephan Lichtsteiner should play at full back.

I haven’t seen a full list of players on the plane except for the bonkers one from the Daily Mirror below, but I would anticipate the players omitted from the under 23 game that we took in on Monday such as Eddie and Smith Rowe, could be in the squad.

However the Mirror says it has the full squad

So what makes me think that the Mirror is simply making it up and claiming to have evidence it doesn’t have?   Look nowhere beyond the fact that there is no backup goalkeeper.  Emiliano Martinez is surely going to be on the plane.  So I am going to suggest that the Mirror’s list of players is in fact a little bot having its way with the information checked, as so often is the case with the Mirror, by not a single living soul.

5 Replies to “Qarabag v Arsenal: bizarre squad spotted by national newspaper. We can’t be that daft can we?”