This is the fourth and final part of our series on Arsenal’s training centre.  The earlier articles were:

Arsenal players exposed to temperatures of minus 160 degrees. London Colney

Arsenal training centre: virtual reality and tales of past recoveries

Let us look finally at the training of the young players. The U23s and U18s.

When they sign professional terms they go to London Colney. Even when a player signs for us at the age of 8 years he is taken to Colney to put his signature on the registration form. They make it a special moment for the player and his family and they show him what the goal is they should aim for: reaching the first team part of London Colney. 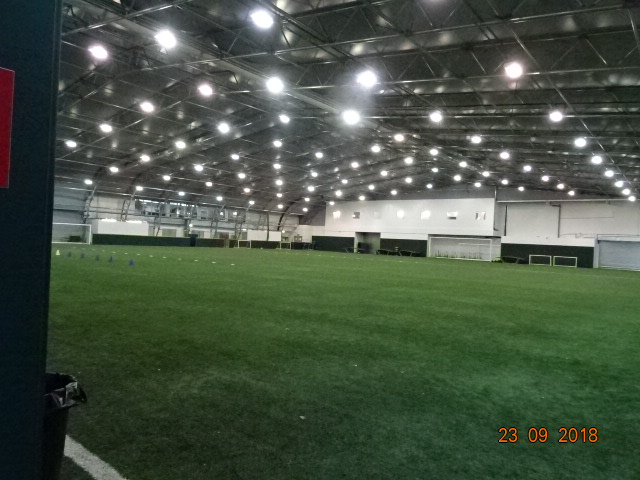 In the U23 dressing room each player has a locker with their number on it. At the start of the season all the numbers are in red. And from the moment they play their first minutes in the first team they get a number in gold. So I could see that Nketiah has a golden number 49. A special number for Arsenal of course and for a special talent. So this is to give the other players in that dressing room a goal: I also want to have a golden number.

And the most important thing to do this is to work, work, work, work and work some more. And by working they don’t just mean working on the pitch and in the training ground.

No, Arsenal also finds it very important that all the players who play for the U23 and U18 get a good education. So the players get schooling at London Colney for 3 days in the week. And as Arsenal wants to have smart players the players also have to work hard in their school work. They must get A grades!

Indeed Arsenal finds it important that the players are intelligent enough to make it in the world outside Arsenal. Because of the 50 youth players or so at Colney only five will make it to the first team if all goes well! That is even a great return. So they know that 90 of the youth players will not become first teamers for Arsenal.

And in order to help them in their further careers Arsenal make sure that they also get coaching badges while playing for Arsenal. Most players who turn 18 have at least two coaching badges. One of the coaching staff is actually now a former youth player who didn’t make it to the first team but who made himself a career as a coach.

Arsenal is proud of this system and aware that other youth academies don’t follow this good example. When you fall out at youth level at certain money clubs they offer you nothing and you have nothing. Of course some will still make it at a lower level but others can go down in to the drain in footballing terms, and indeed in terms of the rest of their life.

Over the last 15 years or so only one player really made a mess of his career when at Arsenal and thereafter. A certain young Dane never felt it important that he had to work hard in school and in the end this shone through in his football on the field. Not enough hard work or effort and then you simply don’t make it in the end, no matter how talented you are. And he was talented!

But most former youth players even those who don’t make it will never regret their time at London Colney. When they are released they have something in their hands and in their head: the Arsenal spirit. And that spirit should guide them through their lives in or outside football.

As I have said only a few will make that step completely but looking at that corridor is one of the best ways to motivate the young players. They are only one corridor away from the top but that is the longest corridor in the world in fact.  And the most difficult corridor to progress along.

Reaching the U18 and U23 dressing room is hard but is nothing compared to reaching the next level. And to get there you need the talent but 90% of it comes down to being prepared to work harder than the rest.

The way our guide spoke with love and admiration about our club, about Wenger, and of former players, showed that he was a real Gooner. One of the lucky people to be able to work for the club we all love. And one of the people who is lucky enough to be close to the heart of the club with the manager, coaches, youth players an first team players. I think it is fair to say most of us would give an arm and a leg to be in such a position.

I was extremely lucky and thankful to have had the opportunity to spend a few hours at the heart of our club in the training centre. It was an amazing journey and I could have carried on writing more and more but I hope this will give you somewhat an impression on how the Arsenal works behind the scenes.

I would like to thank Mark Brindle who made it possible for the supporters clubs to visit London Colney. I would like to thank Sean our guide for the passion and excellent way he showed us around. It was a bit like playing on the pitch at the Emirates a few years ago. Something that will stay with me and something I will remember for the rest of my life.

And finally I want to end with our former manager. You all know I loved him and have defended him till his last day at Arsenal. After seeing his work at London Colney (and believe me he worked harder and longer than any other person there) and the impact it had and still has and will have on our club for many years to come I take my hat off to him once again.  Not just for being our most successful manger of all time but also for being the best thing that happened to Arsenal when we appointed him all those years ago.

I think this is my final word on Wenger: Thanks Arsène!

Editor’s footnote: I’d like to thank Walter for writing up this four part series on the training centre for Untold.  In the next few days we’ll be copying the article onto a permanent page of its own, so that it will always be easy to find for anyone who wants to refer back to it.  I’d also like to say that when Untold was founded over 10 years ago, this sort of reporting was exactly what I had in mind to give meaning to the word “untold” and I am so grateful that we have had the chance to publish this piece.

4 Replies to “Arsenal training centre: the under 18s and 23, and the man who made it happen.”