For centuries, football has always gathered millions of fans around the world regardless of race or religion. However, apart from this solidarity around football fans, it also happens that links are formed between players of the same team.

We tend to forget it but football is above all ‘’human’’. And after hours of training together it is not uncommon to notice that some players form relationships off the field: it is a bromance.

Indeed, even if you don’t really have to be a friend to play together on the same team, it has been shown over the years that two teammates who get on well and develop extra football ties have a greater mutual understanding of their game. This has a huge impact on the quality of the game of the entire team, as evidenced by an infographic published by the sports betting site bwin. 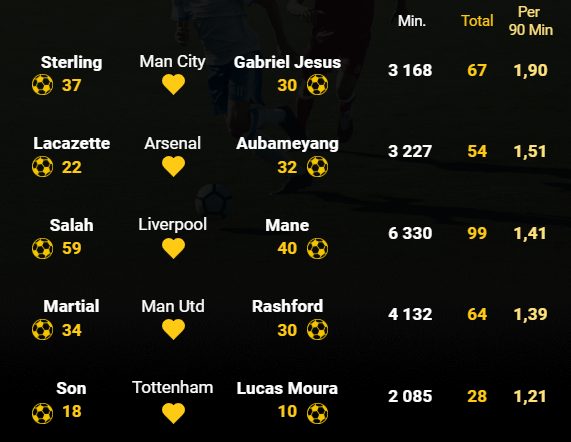 There are duos who carry their team, and then there are Aubameyang and Lacazette. Two players whom everything initially opposed, one former from Saint-Etienne, the other from Olympique Lyonnais. But since their arrival in London, they have become the best friends in the world. Their relationship has hardened on and off the pitch with a significant impact on the results of their team.

In the only double confrontation against Valencia in the Europa League semi-final, they scored all seven of Arsenal’s goals. All in all, they scored 50 of the 111 goals put by the Gunners in all competitions (35 in the Premier League). The two friends complement each other wonderfully this season. With his 22 achievements, Aubameyang finished co-top scorer of the Championship (tied with Mohamed Salah and Sadio Mané). Lacazette was named the best player of the Arsenal season.

In addition to managing the problem of the ban of the club by FIFA, this year the performances of Manchester City are far from acceptable. However, thanks to the emerging chemistry between Kevin De Bruyne and Gabriel Jesus, Pep Guardiola sees his team’s future optimistically. In fact, with more than 14 goals created together (one as an assist and the other as a goal scorer) during their period in Manchester City, the two world class players are holding the club in the league.

No duo of players who have been putted together on the field this year has done better. Together the two players (Kevin De Bruyne and Gabriel Jesus) have already created 5 goals.

Even though they are not in the top 10 in the Premier League, the duo of Mohamed Salah and Sadio Mané have a lot of goals to their credit, including 10 in which one assisted the other. However, for this season, their chemistry seems to dissipate.

The first nine goals they made together in the English first division fell during the first 3,313 minutes they were lined up together, but in the 2,984 minutes that followed they could only add one to the list.

Even if Liverpool FC is not among the best striker bromances, in term of defence, these players are clearly the strongest. In addition to being among the best defenders, their complicity on and off the field starts to grow up match after match. Only eight goals have been conceded by the Reds this season. And In an interview covered by RoxieSpur, the two players answered a friendship quiz about the privacy of each other.

With these two players, Manchester City finds itself once again in the ranking of the best defender bromances. Injured in the knee a few months ago, Laporte aligned alongside Nicolas Otamendi has strengthened the club’s defence this season. However, they still conceded almost twice as many goals as Liverpool FC.

2 Replies to “Premier League: The best bromances of the league”