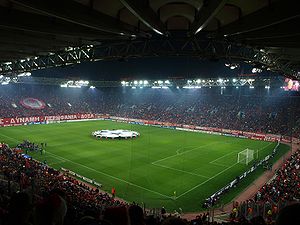 The main question is where on earth is this game being played?  Well, of course, as you probably knew the answer is Στάδιο Γεώργιος Καραϊσκάκης, which for those who studied ancient Greek at school rather than the up to date version is the Karaiskakis Stadium in  Piraeus, a port city in Greater Athens.

In short it is where Olympiacos plays.   The capacity is 32,115, and it is the largest football-only stadium in Greece. It is named after a military commander of the Greek War of Independence Αγώνας who fought against the Ottoman Empire in the early 19th century.  If you have been paying attention you will know that we drew 1-1 in the first leg.  If you weren’t paying attention then you didn’t miss much.

That last game at Rome’s Stadio Olimpico was our away game.  This is our home game.  So we have an away goal.

It was all a bit of a comedown from Group B, where we did the double over each of Rapid Wien, Dundalk and Molde, scoring 20 goals along the way – the most ever by an English team in a Europa League group.

Benfica also came through undefeated, but they only got three wins.

Since the last game they have played out a goalless draw against Farense, a game in which they had 66% of the possession.  It leaves them in fourth, 15 points behind the leaders Sporting Lisbon.  Thus we are the fourth most successful English club in Europe.

The club co-efficient is a cumulative figure based on the club’s performance over the years and with an element built in to take account of the competitiveness of the league in which they play.

Arsenal have won five of the seven previous “home” matches against opposition from Portugal, the defeat to Benfica 30 years ago being the only defeat.  This is the third year in a row that we have faced a Portuguese side in the Europa League: drawing 0-0 at home to Sporting CP in 2018/19 and just beating Vitória SC 3-2 in  2019/20.  Pepé got a double.

Benfica however have won only 11 of their 37 matches against English clubs, drawing 19 and losing seven.

The best omen is that we have won four of the six European ties in which we have drawn the away leg first, including the two most recent.

On the other hand, when Benfica have drawn the first match 1-1, they have won four and lost two of the subsequent games.

David Luiz made his 99th in a European club competition in the opening leg of this tie.  He was a Benfica player from January 2007 to January 2011, winning the 2009/10 Portuguese Liga under Jesus.   He played against them three times in Europe for Chelsea, winning all three games including the 2012/13 UEFA Europa League final in Amsterdam.

And if it becomes a draw, in European shoot outs we have won two, lost two, exactly the same as Benfica.

As for the injuries, we have two men down… here is the info from Physioroom.com