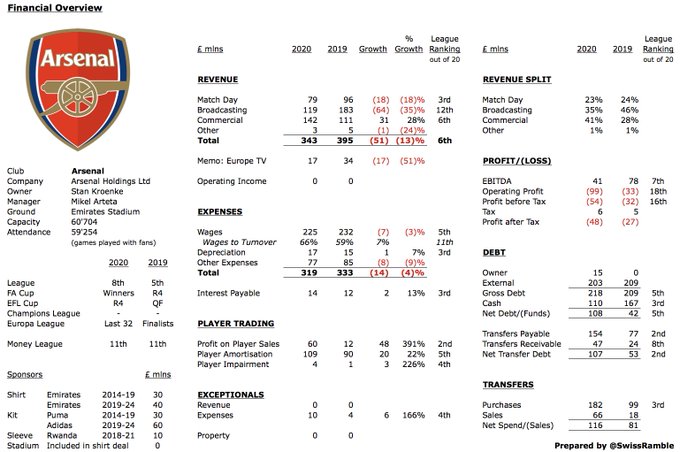 Swiss Ramble, the Twitter poster with an interest in football finances has recently posted a series of tweets on Arsenal’s finances, and I thought I would draw out a few points.

If you are a regular reader you will know that my view is that the club has spent a considerable amount of money on replacing the whole coaching and management team twice in recent years (£31m given away in compensation in this regard according to Swiss Ramble), and also a lot of cash bringing in the players that each manager in turn likes.  Then some of these players are not liked by the next man, and so moved on – often at a noticeable loss.

That £31m need not have been spent.  Mr Wenger and his staff, who were keeping the club in the top six, only had one year to go, while Mr Emery only had four months.  It was a hell of a lot of dosh to throw away.

And when we compare our situation to other clubs, it doesn’t look good.  Arsenal has operating losses which have risen threefold, and are now only exceeded by Everton and Chelsea.  Worse, the main effects of coronavirus won’t be seen until the next set of figures.

The only compensation is that the utter basketcases of football finance are still way ahead of us.  Juventus, Barcelona and Inter are running at double our losses, while Milan and Roma are happily making three times as much loss.

But, as Swiss Ramble says, we have now had two years in a row of losses, following 16 years of profit, and when this season’s figures are totted up this year will be even worse.  And we are doing this with an owner whose objective is to make money not lose it.

Yet the only leaving player we’ve really made money on is Martinez.

But if we are not making money on player sales as Mr Wenger often did, starting of course with Anelka who went to Real Madrid for £22.5m profit, then we do have a problem, because most other clubs with pretensions of trophies are growing their revenues (leaving aside the drop everyone has faced with the virus).  We now have revenues way below the top three – and revenues are everything now, given the owner does not want to invest.

As for thoughts of conquering Europe (the thing Mr Wenger was so criticised for not achieving) our revenues are now over £200m less than Bayern Munich.

And even worse, both Tottenham and West Ham were selling more tickets per game than Arsenal for the last season fans were allowed in.  So, as Swiss Ramble shows us, Arsenal wages are up by £26m over the last three years, and revenues down by £79m.

Worryingly Josh Kroenke recently said, “We have a Champions League wage bill on a Europa League budget”, which is untrue.   We don’t have a Champions League wage bill at all.  Man U and Chelsea are spending far more than we are, and Liverpool and Manchester City have not yet declared their finances.  When a director makes a mistake as basic as that, even a non-exec director, it really is time to start worrying.

Our problem is that two thirds of our income goes on wages, and yet we are not in the top four.  We can’t go on spending this amount, and indeed I am sure the owners won’t let the club do this.

Worse, only Manchester United have spent more than Arsenal on player purchases.  £561m for Arsenal in four years, according to Swiss Ramble.  And there are bloggers every day saying we ain’t spending enough!

Yes we can sell some of the players we have, but these will be players that some of our fans and the anti-Arsenal media having been calling useless.  So their value has dropped and dropped and dropped.  Some of our fans (who are so overtly critical of the players), and our enemies in the media, have combined to create a financial disaster for the club.

According to Swiss Ramble after taking into account money we will receive from clubs for players sold in the last few years, we have got to find another £107m to pay for players we have already bought.  That’s before we find any more for all the players that the newspapers and blogs suggest each day that we must buy if we even want to get back into the Europa League.

And to make it all worse, Kroenke does not put money into his clubs – he takes it out.  Up to the end of 2020 he didn’t put 1p into the club after buying it, and I doubt that will start now.

In contrast, again according to Swiss Ramble, in the same period Abramovich has put £440m into Chelsea and Farhad Moshiri has put £300m into Everton.

And with there very likely to be no Europa League for Arsenal next season, our income is going to go down still further.

3 Replies to “Arsenal’s finances are really getting into a mess and a half.”