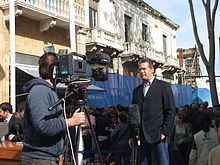 We have long known that 97% of the transfer stories journalists report are nonsense.  We know that their eternal kow-towing to referees, and also that their all-powerful organisation the PGMO, holds god-like status to journalists and won’t ever be criticised in any way whatsoever, despite its nonsense fake statistics and refusal to answer any serious questions.

Now we can see just how stupid some journalists can be.  Invited by a couple of pranksters to talk about an interview with two members of the royal family which had not yet been broadcast, and not yet been seen by anyone, four senior journalists all willingly agreed.

The four included the Queen’s former press secretary CNN’s royal commentator, along with the editor in chief of Majesty magazine.

These journalists willingly gave comments on a film they had not seen, as if they had actually seen it, expertly delivering meaningless meanders around nothingness – comments that were bland enough to sound ok whatever the members of the royal family said.

Ingrid Seward, for example, proclaimed that the Duchess of Sussex, “to my mind this was an actress giving one of her great performances – from start to finish, Meghan was acting.”  And this remember was without having seen the interview, or having any information of what was in it.

One of the pranxters commenting on the way the journalists had so willingly jumped at an opportunity to hoax their own readers said, “To me, it’s like asking a football commentator to give me 90 minutes of voice-noting on [a match they haven’t seen]. It’s such a ludicrous premise.  These people charge news organisations for their views, and their views do shape public opinion.”

He clearly knew his stuff since much of the commentary on football written in newspapers and on websites reads as if the comments are made by people who have been fed acceptable lines by their editors – or possibly by PGMO.

“I think it’s quite a commentary on the modern world,” said one of the organisers of the sting, Josh Pieters. “You need to really think about the information you take in, and try and verify it and do some research into what you hear and read … I think this video does point to that in a way to say, sometimes things you see aren’t always as they seem.”

When asked about his role in the video, Fitzwilliams a self proclaimed royal expert and commentator, said  the comments had been “used out of context”, but added, “This sort of pre-record, filing material in advance, is frequently done for various news stories, obituaries etc so journalists have instant comment in the event of breaking news. There is nothing whatever dishonourable in it,” he added.

Oh, so commenting on an event that hasn’t happened in such a way that  the readers or viewers think that it has happened is not dishonourable????????????

In fact, every day, day after day, with the fake news that PGMO offers, such as its claim that their referees are 98% accurate, and that (despite the clear evidence that shows otherwise) there is no bias for home teams when fans are in the ground.

This whole basic claim that there is nothing amiss in football is the hoax that the media pulls on fans every day, day after day, and is so widespread no one ever questions it.

We are not being given comments and insights into reality, but a preordained approach to football in which it is agreed way in advance what is and what is not real.  The one thing about the royal correspondent Fitzwilliam is that he has told it like it is.

And yet it is the work of journalists that sets out the way we see the world.  Including for example the notion that there is nothing seriously wrong, or even different, about the way refereeing is organised in the Premier League. Or that there is nothing amiss with the media giving publicity to the world cup and players being involved, when vast numbers of migrant workers have died building the stadia, and many more have been employed as slave labour to get the grounds built.  Or that there is clear evidence that the voting for the world cup to be in Qatar was rigged.

That comment that “This sort of pre-record, filing material in advance, is frequently done for various news stories, obituaries etc so journalists have instant comment in the event of breaking news,” really does confirm what we have so often said on Untold about football.

You can’t believe a word of what is in the media.

The Arsenal History Society publishes a video of a historic match every day.  You can find an index of many of the historic videos is here

8 Replies to “Journalists? Revealed: the depths of behaviour we are dealing with, every day”