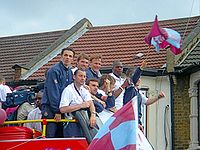 This rather jolly picture shows the WHAM players celebrating winning the play offs in order to climb back into the Premier League in 2005 after a period in the second tier.

Moving back to the present, however, I must say I am finding the increasing use of “All you need to know” in a headline incredibly annoying, since I seriously do not like people telling me that they know what I need to know.  How do they know?  Are they inside my head?

And so, I choose not to offer this at all.  Instead I offer information you almost certainly don’t need to know but which might just help pass the time before the game.

HITC run the headline “Phenomenal player returns” and then offers the team below.  I’ll let you work out which play is actually returning and from where.

Sportslens give us a different take however.

The Guardian has a different version

Football London have the “news” that “Winger Bukayo Saka is fit and available for selection for Arsenal’s London derby with West Ham United at the London Stadium on Sunday afternoon, the club has announced.”

That of course doesn’t mean he will play and the Guardian has him listed as “Doubtful”. Everyone else with a team prediction is offering minor variations on the above.

However there are some very interesting figures coming from WhoScored.  Their statistics have West Ham outdoing Arsenal on virtually every statistic they measure except for player height!  More dribbles, more tackles, a lot more aerial duel success, average playing ratings.  From which they conclude that Arsenal will score as a result of a through ball but WHAM will dominate in the air.

Our best rated player from their rating system is Lacazette with a rating of 6.89.  West Ham, according to Who Scored, have four players rated over 7.00: Soucek, Rice, Lingard and Antonio.

If West Ham were to finish fifth in the league this season (their current position) it would be their highest position since returning to the premier league in 2012.

Since that return from the lower levels they have only got into the top half of the table twice.    In 2013 they were 10th (which just squeaks in as top half) and in 2016 they were 7th.   Last year they were 16th.  This century they have had 12 separate managers, and one who has done two separate spells.

Finally, one other little thing I noticed in this little gander at all things WHAM, in their last set of accounts which go up to 31 May 2020, the club lost £65.3m which is rather careless.   Now it is true that those figures do include the start of the pandemic, but only the start.   And we have to remember they have got their stadium for free, compared with some clubs that have had to borrow money and pay it back in order to build a stadium.  (If you are a UK tax payer you are paying for that stadium, and will be quite probably for the rest of your life).

Anyway, on to the match… although if you want to pass the time before hand we do have…

42 Replies to “West Ham v Arsenal. All the things you don’t need to know”