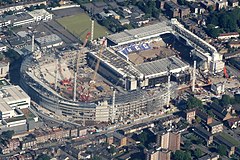 Full marks to the Guardian for acknowledging that “only Arsenal actually apologised for behaviour that, collectively, has been widely condemned as brazenly self-serving.”  I think Liverpool came up with a statement a little later after that Guardian comment was written but not quite as fulsome an apology.

Winner in the shutting the door after the horse race came Daniel Levy, who did “regret the anxiety and upset caused by the ESL proposal”.  Not his fault then.  He was just passing by.  Saw it floating along and jumped on the bus.  Turned out the bus was going the wrong way.  Not his fault at all. Not a bit of it.  Didn’t actually know it was a bus.

But overall we still have the question, how did they get it so wrong?

Maybe it’s because this is not how sport is arranged in America, and so the Americans thought it ought to be like that here.  The Americans being Liverpool, Arsenal and Manchester United.

The Russians joined in but couldn’t quite understand why there were no military massing at the border, and the Sheikhs couldn’t work out why anyone had to be consulted about anything.  As for Tottenham, they did point out that having won the League Cup in 2008 it was perfectly natural that they should be consulted on matters of such magnitude.

And so the media, seeing the way the wind blew, joined in the attacks on the six clubs, denouncing them as this, that, and something else.  And we knew we were in trouble when even the offer to make Gunnersauraus Arsenal’s prime negotiator with the Superduper League failed to impress.

And of course there was then the ” ‘SAVE US FROM KROENKE’: SOME AFC FANS TWEET GUNNER-MAD TYCOON WHO’S RICHER THAN STAN” from the increasingly odd HITC, with the news that these fans (last seen meandering down the centre of the Holloway Road) want Aliko Dangote to take over the club, on the grounds that, well, he isn’t there at the moment.

But the issue has raised concerns and lots of people have been bandying around the concept of Rule L9.

Interestingly no one is actually quoting Rule L9, but the bandying is certainly going on.  So here it is in glorious technicolour: Yer Actual Rule L9

“Except with the prior written approval of the Board, during the Season a Club shall not enter or play its senior men’s first team in any competition other than:

This in fact shows what the club owners were up to – there was a way of getting the club into the new league, by offering the County Association (all of whom are in dire need of more pitches for schools and amateur football) the funding for a set of pitches, in return for their approval.

I hope the clubs still pay up, but somehow… I doubt it.

Anyway, since the end of the affair there have been calls for reprisals against Ed Woodward, Bruce Buck and Vinai Venkatesham, and others.  Woodward re-signed as Manchester United’s executive vice-chairman but not until 31 December.

And there is a deeper problem.  During the time the six breakout teams have been plotting their move they have been assuring the rest of the league that nothing of the kind was being considered.  And so the relationships have now totally broken down and there is no trust between the six leavers and the 14 remainers.  Indeed there are moves afoot to discipline the six leavers.

So what happens now?

There is also the issue of Everton v Tottenham and why Tottenham are a Big Club but Everton are a little club.  Here is a list of their trophies with the year of the latest win in brackets.  Arsenal’s figures are given in the final column by way of comparison.

Now it is true that Tottenham have won three more trophies than Everton and they have won more recently than Everton (2008), but the fact that Everton have won nine Division 1 titles to Tottenham’s two surely counts for something.

Also the fact that Tottenham have not won the league for sixty years surely makes them a bit dubious as entrants in any sort of super league.

In fact now I come to think of it, this must be why Tottenham were in the new competition.  They really have done rather well now I come to look in detail.

he Sweet FA and the corruption files

5 Replies to “After the apologies, what next for naughty six? And how did they get it so wrong?”