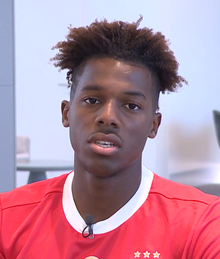 The completed transfers are thought to be those of Nuno Tavares (pictured left) and Albert Sambi Lokonga.  More on those below, but first the question of slowness for slowness is the accusation every transfer window, we go slow, dither about, argue over terms, don’t buy when we could, and then lose the player and get someone second rate instead.

The alternative vision is that the moment Arsenal make an enquiry and make an offer, the selling club immediately goes out and offers the player to everyone else, saying Arsenal have offered £x, and if Arsenal are offering early in the window, we know the player is valued by them, and that they are trying to get him on the cheap, so do you fancy him at £x + £5m?

But of course that is not just what happens to Arsenal – it happens to other clubs – although less to Manchester City and Chelsea, because they have wealth far beyond the Kroenkes and so can by and large go and pick out whoever they want knowing that no one can match the price – especially since the financial collapse of a number of the major clubs in Europe as a result of the pandemic.

What I am told some major clubs do, is make a good offer and warn the club that might want to sell, that if word gets out, then the offer is withdrawn.   And we have seen the effects of this several times in recent years when keeping our regular tally of players being discussed.  There is no mention at all of a particular player and then within a day or two of the first mention, he’s sold.

So to try and resolve this a little I’m going to try and keep track of purchases among the top clubs.  The situation on 30 June

So of the ten teams being tracked three appear to have done nothing at all five had bought at least one player and three have sold one player.

But if we exclude players under £20m we see less activity

I’ll come back to this chart as time goes by through the remaining two months of the window.

So who have we bought?

The Guardian and other more reputable sources are suggesting today that the left-back Nuno Tavares has been signed from Benfica for £6.9m.  Plus the purchase of the Anderlecht midfielder Albert Sambi Lokonga is just about done.

Apparently the only thing outstanding with the Lokonga deal is the amount that Arsenal would pay to Anderlecht in addition to an initial fee of £16m if the club sell the player on in the future.

Here is Lokonga’s playing career.  Although he has not played for his country, he has been called into the Belgium senior squad on at least one occasion.

and Nuno Tavares (Left back and right back)

Tavares played against Arsenal in the Europa League in February, coming on as a substitute.  One story is that Arsenal are trying to offer Guendouzi in return, but Guendouzi is being somewhat difficult about the matter. Tavarers’ first-team debut came in September 2019.

Certainly buying players this young means Arsenal have a chance to teach them that in the Premier League when playing for Arsenal, it is by far the best policy not to tackle.

3 Replies to “Arsenal’s first two transfers appear to be complete. But are we being slow?”