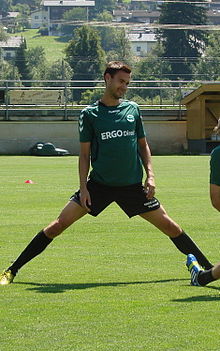 It is possible, although perhaps rather unlikely, that you know of Tim Sparv, the Finnish midfielder.  He spent three years in the youth academy of Southampton and was a member of Southampton’s youth team that reached the final of the FA Youth Cup in 2005, playing in a team that also included Theo Walcott.

Since then he has played 84 times for Finland, and now at 34 he is obviously in the latter part of his career – but is still very much captain of Finland.  But unlike most footballers we hear of, he’s not giving instant opinions on clubs’ playing styles hoping for a regular spot on a radio or TV show, getting money for chatting within the rules of what you are allowed to chat about.

No, instead he’s just written a 2500 word serious article on why we should be working ever harder to keep the issue of Qatar on the agenda.

Of course in countries where the media take human rights more seriously than the bulk of the English press, such a stance is welcomed.  But as we know, in England, politics and sport must not be seen together.  As far as I know only one newspaper has raised concerns about Qatar, and they have certainly not raised the thought that England ought not to be competing for a place in that competition.

So Tim Sparv has written a piece in The Players’ Tribune with the title “We need to talk about Qatar”.

If you don’t know The Players’ Tribune I would suggest that when you’ve finished reading my little ramble here, you follow up on that link which takes you to the football section of the site.  It shows what players can do as writers when they are not misled and misdirected by a national media anxious to stop all serious debate about the political issues that surround football.

Now if you do read that article you will soon see that Sparv has not been acting on his own in highlighting the issue of Qatar.  As he points out, other players had understood why voicing major concerns about Qatar was vital.

Let me quote one small piece where the player talks about being asked on TV if he was aware of the situation in Qatar and why he had chosen to be there for a game.    (I can’t imagine any English newspaper asking a member of the English team about human rights, so it does make for interesting reading.)   Here is what he says…

“Some of the players were there for the first time — they were as excited as little kids just to pull on the national shirt, and suddenly they were being forced to answer questions about a foreign country, its ways of dealing with migrant workers and its human rights track record….

“It was uncomfortable for all of us. And I realised that I had no good answers. In fact, new questions began to pop up in my head.

“Is this really what we should be doing?

“By being here, are we giving indirect support to a regime that we shouldn’t?

“So we players and the football federation took a long, hard look in the mirror and decided not to have any more camps in Qatar. But I still felt uncomfortable. Clearly there was something important going on. And, just as clearly, I had not spent enough time thinking about it. “

In the article he then talks about FIFPRO – the global trade union grouping for footballers, to which the English football trades union is affiliated.

The article continues by talking about the player’s own decision to investigate what is really happening in Qatar, and let me conclude here by giving one more quote which relates to the voting for giving Qatar the world cup finals in the first place.

“Where were the fans? The players? The NGOs?

“Where were the human rights experts?

“Why were all these social issues ignored?

“I do appreciate that some things have changed at FIFA since then. A lot of the people who voted for Qatar, those who bribed and took bribes, have been kicked out. Before the 2026 World Cup was awarded, FIFA said it would take human rights and environmental protection into account during the bidding process. It made documents like the bid evaluation report public. So it seems like they’re cleaning up the place. I really hope they are.”

The article continues thereafter and I do hope you have time to read it.   But in case you can’t find the time, let me leave you with a final quote from the article.

“Saying something is so much better than saying nothing.

“Maybe some people will abuse you for raising your voice — perhaps they would either way. Maybe you will have some emails to reply to and some phone calls to answer.

“But when the history of this World Cup is written, you will be on the right side.”

If you are a regular reader of Untold, I hope that you are here, at least in part, because you agree.