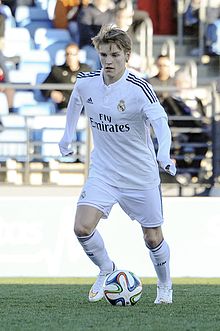 For me the news that Erling Braut Haaland and Martin Odegaard and some other players from Norway wore t-shirts with the slogan ‘Human rights, on and off the pitch’ was extraordinary, and incredibly welcome.

If you are a regular Untold reader you might know that I have been arguing for quite a while in support of migrant workers building World Cup venues in Qatar for the 2022 finals.  This was heightened when last year Amnesty revealed migrant workers had gone unpaid by a private Qatari company for up to seven months while building Al Bayt Stadium, unable to leave the job, unable to leave the country.

My argument is that taking the knee in favour of Black Lives Matter while ignoring what Qatar is doing, and worse, going to the world cup finals in full knowledge that Qatar is the home of modern slavery, is just the ultimate in hypocrisy.  I have found very little in the media to support that notion – TV, radio and the press all talk up the next world cup as a wonderful thing, with no contrast with the Black Lives Matter protest ever mentioned.

It is a breakthrough moment, and although I am sure most of the media is going to ignore this, given that beforehand all we had was silence and no commentary on the this issue.  But eventually, if the debate can become public enough the media will catch up, pretending as ever that they were there all the time.

Speaking of the statement, the chief coach of Norway Staale Solbakken, announced that his squad were working on various ways of bringing this issue to the attention of world football.  xture as an opportunity to express their reservations.

“We’re working on something concrete,” Solbakken told a press briefing, without revealing the details.

“It’s about putting pressure on FIFA to be even more direct, even firmer with the authorities in Qatar, to impose stricter requirements,” he explained.

Odegaard said he felt the whole team wanted to make a statement.

“I have the impression that a lot of (players) are interested in this, care about it and want to do something to try and contribute in a good way,” Odegaard said.  And the fact this was said by a man from Arsenal (although admittedly only on loan at Arsenal) is something I am very happy about, and I think should make all Arsenal fans proud.

The move by the Norwegian players was reported in the Guardian which has also noted that “more than 6,500 migrant workers have died in Qatar since the World Cup was awarded to the Gulf state.”  They also state that “The Norwegian Football Federation is expected to debate the issue at a special congress in June.”

The Guardian also adds that “According to a poll published on Monday in newspaper Verdens Gang, 55 percent of Norwegians believe their country should boycott the event, while 20 percent are against it.”

Although the rest of the British media, following its traditional “football first human rights last” approach have ignored the story, the Guardian’s piece has been picked up by the media in many other nations.  It isn’t front page news yet, but it is a superb first step, and I am delighted that player currently at Arsenal is at the very centre of this protest.

7 Replies to “Odegaard speaks out against world cup in Qatar; a country built on slavery”