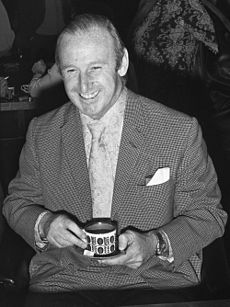 On 26 September 1970 Arsenal lost 5-0 to Stoke City in the League.   Which was surprising because prior to the match we had played nine, won five, drawn three and lost one.   We were sitting third in the league and with a goal difference plus +11 (although they didn’t measure goal differences in those days).

18,153 turned up to watch – a poor attendance given that all the talk in the press about Arsenal’s new exciting style and endless reports of a punch-up between the players in a restaurant that had occurred after a game in Italy against Lazio.   And it was a surprise given that Arsenal had conceded only seven goals in the nine League games thus far a 2-0 win would have seemed more likely than anything else.

Besides, in goal there was Bob Wilson who was getting the plaudits not just for his ability to dive at the feet of oncoming forwards and get out uninjured but also because he was so interviewable.

Yet the reality on the day was that the score-line could easily have been worse, with Stoke missing a couple of simple chances.  It was in short the collective bad day for the defence, who spent the game giving the ball away again as soon as they did manage to get possession for more than a second or two.

The fourth goal epitomised the problems – Wilson went for a bouncing ball, which really could have gone anywhere, but the bounce on the uneven pitch took it to Jimmy Greenhoff who had the simplest of chances to convert.  The fifth came from a shot that Wilson parried straight to Alan Bloor who scored.

The press felt the mighty had truly fallen and such plaudits as they had got from beating Lazio in the second leg of a Fairs Cup match just three days before, now counted for nothing.   Winning the league was not on anyone’s mind after this display.

The Mail finds cause to use its favourite word of the year (“rant”) with ‘He was defending his team, I was defending mine’: Mikel Arteta plays down his furious first-half touchline clash with Jurgen Klopp at Anfield… despite Arsenal then going on to get thrashed by Liverpool at Anfield”    (And that is just the headline!)

But does this mean that the defeat yesterday defines the true Arsenal and all the earlier matches against lesser clubs (like Tottenham) are merely Arsenal flattering to deceive?

In 1970, the 5-0 defeat to Stoke didn’t affect Arsenal at all, for what is often forgotten is that just two days later Arsenal beat first division Ipswich in the second round League Cup replay, 4-0.   Kennedy got two, Radford and Roberts the others.

Arsenal were doing ok in the league, but their away record read won 1 drawn 2 lost 2, five goals for, 10 against.  Those of a more negative approach to life said that Arsenal needed to do much better away from home.  Those of a positive persuasion noted the club was still in all three competitions, with the fourth (the FA Cup of course) awaiting them in January.

September ended with Arsenal in the third round of the league cup, and with Leeds United still top of the First Division, two points ahead of their nearest rivals Manchester City. The challenge at the top remained a close one, with Tottenham Hotspur, Arsenal and Chelsea all level on points.  But the 5-0 defeat to Stoke had dented the goal average and we were discounted in the media as serious challengers.

As for why I bother so much with events 50 or so years ago, well, if you know your history you’ll have recognised the season, 1970/71.   We lost 5-0 to Stoke and later went out of the Fairs Cup to Koln.  But we won the league at White Hart Lane for the first time, and won the FA Cup a few days lafter to give us the first double.

One result in the overall scheme of things doesn’t have to mean that much.