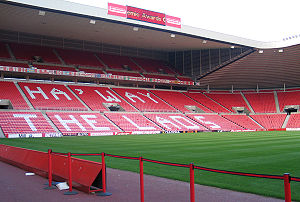 Next up we have third tier Sunderland in the League Cup quarter-final at 7.45 on Tuesday.  The match, although not part of the season ticket package, is sold out – which aside from the enthusiasm of Sunderland supporters to see their team, reflects well on the ongoing Arsenal policy of very low prices for league cup games.

Sunderland are currently trying to battle their way into the Championship.  Here’s the current league table.

Sunderland are one of a number of clubs in League One who once upon a time played in the top league.  Others in League One at the moment include, Oxford United, Portsmouth, Sheffield Wednesday, Ipswich Town, Charlton Athletic, Bolton Wanderers, and AFC Wimbledon.  They do however boast a ground with a 49,000 capacity, this season getting just under 30,000 average – remarkable for a third tier club.

If we look at Sunderland’s away form however that shows the impact their home fans have for away they don’t do that well….

The descent of Sunderland to the lower reaches has been dramatic.  In 2016/17 they were playing in the Premier League, but ended up at the foot of the table that year with just six wins from 38 games.  But while some teams bounce back from relegation (Fulham, Norwich, West Bromwich for example) Sunderland took an opposite trajectory and continued the plummet, being relegated once again the following season, this time is seven wins in 46 games.

Thoughts of an instant return were set aside as the club then finished 5th, 8th and 4th, failing to make it though the play offs.

As to the question of why did Sunderland collapse, we can perhaps look back to May 2009 when Ellis Short took control of the club, appointing Steve Bruce as manager the following summer.   A year and a few months later Bruce was out and Martin O’Neill came in, and shortly after Niall Quinn (once of Arsenal) left the club to focus on other business interests.

O’Neill lasted until March 2013, and was replaced by Paolo Di Canio who lasted just 13 games, being replaced with Gus Poyet.  You get the picture of turmoil I’m sure and Poyet went in March 2016 being replaced by Dick Advocaat, while a player at the club was charged with sexual offences with a child.

Advocaat kept the club up, but then left at the start of the 2015/6 season, and in walked the massive Sam Allardyce or whom it has been said, and often quite rightly.   With the sex case ending with a player in prison, the Chief Exec resigned over his handling of the case.

In 2016 the infamous Allerdyce went on to be England manager (something that didn’t go well) and David Moyes took over – Moyes quickly being charged after warning a female supporter she might “get a slap”.  He successfully takes the club down and then resigns.

The next manager lasted 18 games and as turmoil continues the club plops down into the third tier in April 2018.

This season, matters have been better but the club has slipped a little of late, winning two of their last five games but only losing in the Trophy game.

Four home games in a row – they must be relieved to get away!  So to end this look at the opposition here is the normal home and away comparison although of course we are comparing clubs from different leagues.

So leaving aside the difference in leagues between the clubs, there is also something of a difference in performance home and away.

Arsenal will certainly put out a side that rests a number of their top players, but I am hoping that Smith Rowe will have a spot of fun shooting at that defence of theirs which manages to let in two goals a game away to League One opposition.

As ever, more anon.

Day by Day – An Arsenal video for (almost) every day of the year in order.

For details of the videos sorted by club, and videos in the order we published them, plus our 21 golden great videos please see here.

One Reply to “Arsenal v Sunderland: difficult years for the opposition on and off the pitch”