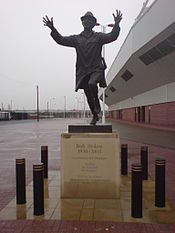 The picture to the left, in case you are wondering, is of Sunderland manager Bob Stokoe, who won the cup for Sunderland in 1973 and famously galloped onto the Wembley pitch at the end to celebrate what was a famous win for the underdogs.

I find that statue interesting, because as Tony has mentioned more times than perhaps is necessary, he was the person who came up with the idea of statues around the ground specifically including Herbert Chapman looking up at the ground as if to say, “I created that”.  Chapman is seen at Arsenal Stadium in more contemplative mode, as befits the man who built the modern club.

I guess the league cup takes on an extra element of interest this season being the third of three competitions rather than the fourth of four.  And we have sailed through so far…

Of course the media by and large didn’t report the first game, because that resounding win interfered with the thesis that Arsenal had lost all their opening games – we didn’t, we lost the first three league games.  After which we went seven unbeaten.

Sunderland’s approach this season has not involved any Premier League teams but has involved playing every game away from home.

But the injury table shows that there are problems with the idea of repeating that lineup.  As ever information comes from the EPL Injury Table site.

Sead Kolasinac is said to be progressing well but won’t be back in training until January.

Takehiro Tomiyasu was taken off as a precaution and is expected to be ready to play on Boxing Day.

Sambi Lokonga and Pablo Mari Villar both have corona virus.

Of course with Sunderland being a third-tier side for a while, it is easy to forget that they were once more of a force in the top division.  And although across time we’ve come out on top, it is not by an enormous margin: 62 Arsenal wins, 50 Sunderland wins and 41 draws.

Many of their wins came before the first world war – indeed there was one period when we only won one game in 11 against them in the pre-war era.  Post war didn’t get much better with another run of one win in 10 in the 1920s, and even in the all conquering 1930s we found them hard going, Arsenal winning eight, Sunderland nine, and the rest being drawn.

Of the last 26 meetings between the clubs, which takes us back to 2003, Sunderland have won two, there have been seven draws and Arsenal have won 17.  But the biggest win of all was in Sunderland’s favour, 7-1 on 12 September 1953 in the League Division One game.

Arsenal v Sunderland: difficult years for the opposition on and off the pitch

Up next, the cards and the referee